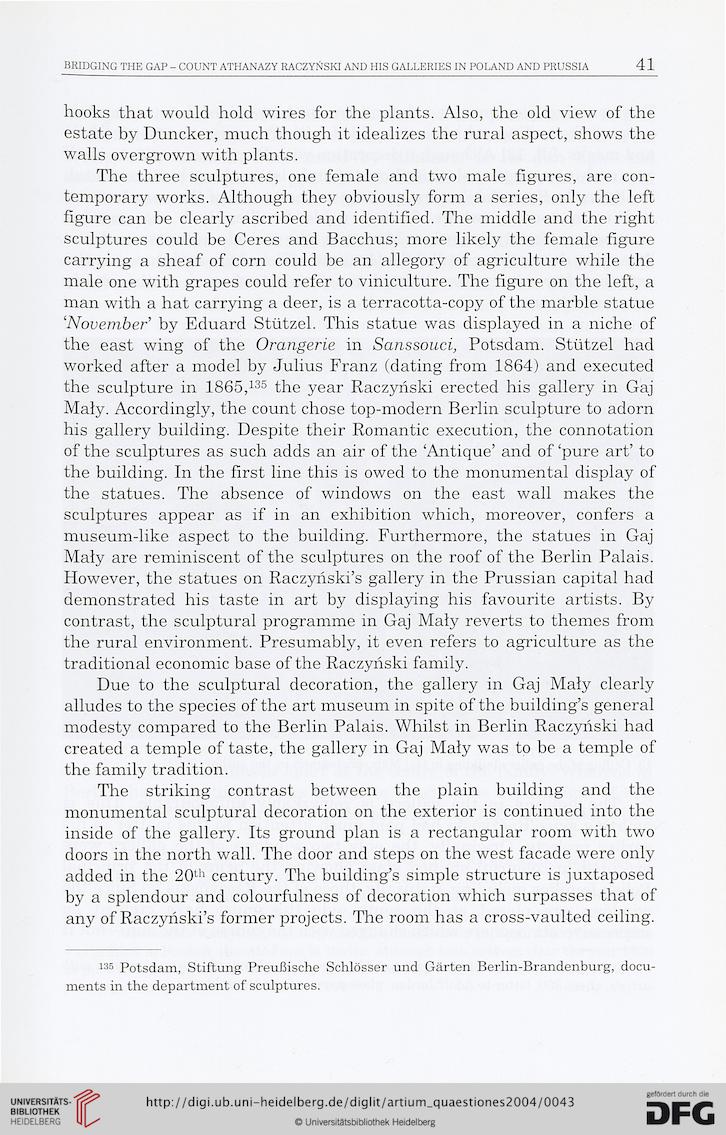 hooks that would hold wires for the plants. Also, the old view of the
estate by Duncker, much though it idealizes the rural aspect, shows the
walls overgrown with plants.
The three sculptures, one female and two male figures, are con-
temporary works. Although they obviously form a series, only the left
figure can be clearly ascribed and identified. The middle and the right
sculptures could be Ceres and Bacchus; more likely the female figure
carrying a sheaf of corn could be an allegory of agriculture while the
male one with grapes could refer to viniculture. The figure on the left, a
man with a hat carrying a deer, is a terracotta-copy of the marble statue
‘November’ by Eduard Stiitzel. This statue was displayed in a niche of
the east wing of the Orangerie in Sanssouci, Potsdam. Stiitzel had
worked after a model by Julius Franz (dating from 1864) and executed
the sculpture in 1865,135 the year Raczyński erected his gallery in Gaj
Maly. Accordingly, the count chose top-modern Berlin sculpture to adorn
his gallery building. Despite their Romantic execution, the connotation
of the sculptures as such adds an air of the ‘Antique’ and of ‘pure art’ to
the building. In the first line this is owed to the monumental display of
the statues. The absence of windows on the east wall makes the
sculptures appear as if in an exhibition which, moreover, confers a
museum-like aspect to the building. Furthermore, the statues in Gaj
Maly are reminiscent of the sculptures on the roof of the Berlin Palais.
However, the statues on Raczynski’s gallery in the Prussian capital had
demonstrated his taste in art by displaying his favourite artists. By
contrast, the sculptural programme in Gaj Maly reverts to themes from
the rural environment. Presumably, it even refers to agriculture as the
traditional economic base of the Raczyński family.
Due to the sculptural decoration, the gallery in Gaj Maly clearly
alludes to the species of the art museum in spite of the building’s general
modesty compared to the Berlin Palais. Whilst in Berlin Raczyński had
created a temple of taste, the gallery in Gaj Maly was to be a temple of
the family tradition.
The striking contrast between the plain building and the
monumental sculptural decoration on the exterior is continued into the
inside of the gallery. Its ground plan is a rectangular room with two
doors in the north wall. The door and steps on the west facade were only
added in the 20th century. The building’s simple structure is juxtaposed
by a splendour and colourfulness of decoration which surpasses that of
any of Raczyński’s former projects. The room has a cross-vaulted ceiling.