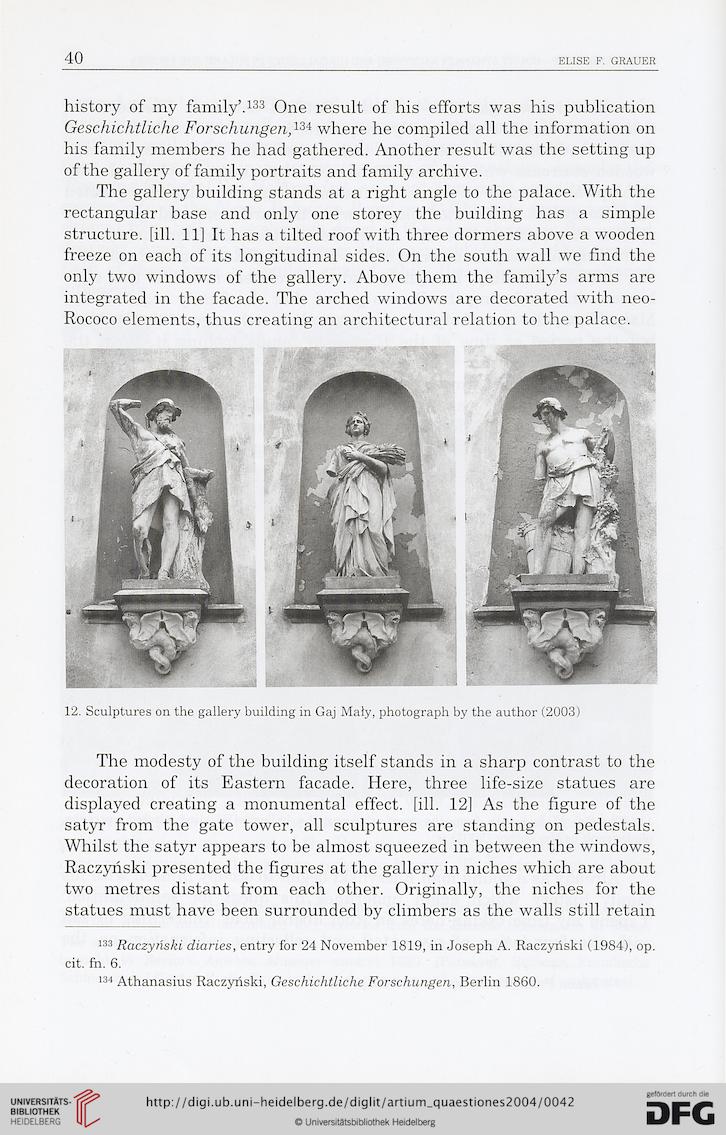 history of my family’.133 One result of his efforts was his publication
Geschichtliche Forschungen,134 where he compiled all the information on
his family members he had gathered. Another result was the setting up
of the gallery of family portraits and family archive.
The gallery building stands at a right angle to the palace. With the
rectangular base and only one storey the building has a simple
structure, [ill. 11] It has a tilted roof with three dormers above a wooden
freeze on each of its longitudinal sides. On the south wall we find the
only two windows of the gallery. Above them the family’s arms are
integrated in the facade. The arched windows are decorated with neo-
Rococo elements, thus creating an architectural relation to the palace.


12. Sculptures on the gallery building in Gaj Maly, photograph by the author (2003)

The modesty of the building itself stands in a sharp contrast to the
decoration of its Eastern facade. Here, three life-size statues are
displayed creating a monumental effect, [ill. 12] As the figure of the
satyr from the gate tower, all sculptures are standing on pedestals.
Whilst the satyr appears to be almost squeezed in between the windows,
Raczyński presented the figures at the gallery in niches which are about
two metres distant from each other. Originally, the niches for the
statues must have been surrounded by climbers as the walls still retain
133 Raczyński diaries, entry for 24 November 1819, in Joseph A. Raczyński (1984), op.
cit. fn. 6.
134 Athanasius Raczyński, Geschichtliche Forschungen, Berlin 1860.