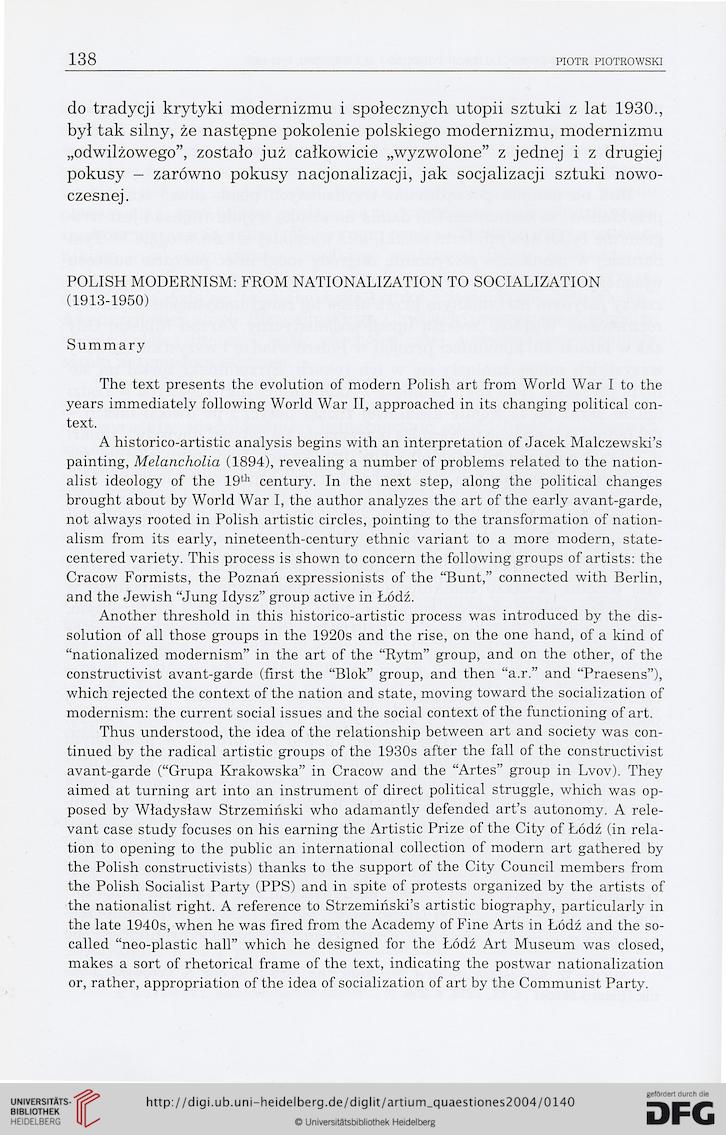 POLISH MODERNISM: FROM NATIONALIZATION TO SOCIALIZATION
(1913-1950)
Summary
The text presents the evolution of modern Polish art from World War I to the
years immediately following World War II, approached in its changing political con-
text.
A historico-artistic analysis begins with an interpretation of Jacek Malczewski’s
painting, Melancholia (1894), revealing a number of problems related to the nation-
alist ideology of the 19th century. In the next step, along the political changes
brought about by World War I, the author analyzes the art of the early avant-garde,
not always rooted in Polish artistic circles, pointing to the transformation of nation-
alism from its early, nineteenth-century ethnic variant to a more modern, state-
centered variety. This process is shown to concern the following groups of artists: the
Cracow Formists, the Poznań expressionists of the “Bunt,” connected with Berlin,
and the Jewish “Jung Idysz” group active in Łódź.
Another threshold in this historico-artistic process was introduced by the dis-
solution of all those groups in the 1920s and the rise, on the one hand, of a kind of
“nationalized modernism” in the art of the “Rytm” group, and on the other, of the
constructivist avant-garde (first the “Blok” group, and then “a.r.” and “Praesens”),
which rejected the context of the nation and state, moving toward the socialization of
modernism: the current social issues and the social context of the functioning of art.
Thus understood, the idea of the relationship between art and society was con-
tinued by the radical artistic groups of the 1930s after the fall of the constructivist
avant-garde (“Grupa Krakowska” in Cracow and the “Artes” group in Lvov). They
aimed at turning art into an instrument of direct political struggle, which was op-
posed by Władysław Strzemiński who adamantly defended art’s autonomy. A rele-
vant case study focuses on his earning the Artistic Prize of the City of Łódź (in rela-
tion to opening to the public an international collection of modern art gathered by
the Polish constructivists) thanks to the support of the City Council members from
the Polish Socialist Party (PPS) and in spite of protests organized by the artists of
the nationalist right. A reference to Strzemifiski’s artistic biography, particularly in
the late 1940s, when he was fired from the Academy of Fine Arts in Łódź and the so-
called “neo-plastic hall” which he designed for the Łódź Art Museum was closed,
makes a sort of rhetorical frame of the text, indicating the postwar nationalization
or, rather, appropriation of the idea of socialization of art by the Communist Party.