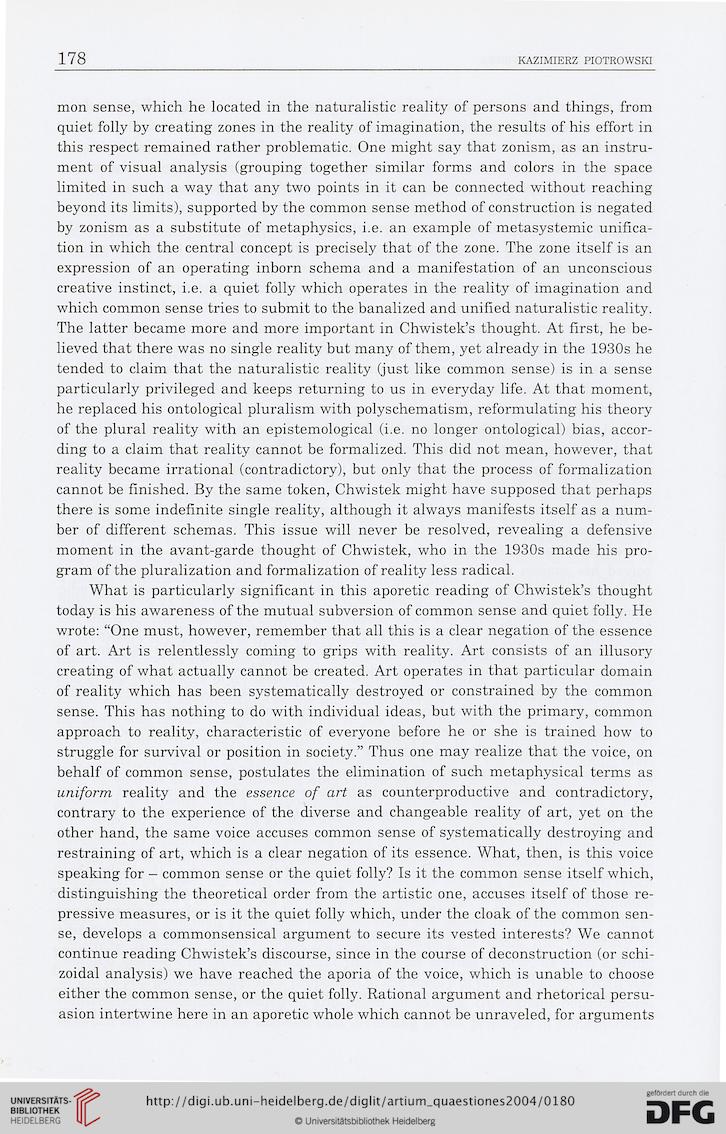 mon sense, which he located in the naturalistic reality of persons and things, from
quiet folly by creating zones in the reality of imagination, the results of his effort in
this respect remained rather problematic. One might say that zonism, as an instru-
ment of visual analysis (grouping together similar forms and colors in the space
limited in such a way that any two points in it can be connected without reaching
beyond its limits), supported by the common sense method of construction is negated
by zonism as a substitute of metaphysics, i.e. an example of metasystemic unifica-
tion in which the central concept is precisely that of the zone. The zone itself is an
expression of an operating inborn schema and a manifestation of an unconscious
creative instinct, i.e. a quiet folly which operates in the reality of imagination and
which common sense tries to submit to the banalized and unified naturalistic reality.
The latter became more and more important in Chwistek’s thought. At first, he be-
lieved that there was no single reality but many of them, yet already in the 1930s he
tended to claim that the naturalistic reality (just like common sense) is in a sense
particularly privileged and keeps returning to us in everyday life. At that moment,
he replaced his ontological pluralism with polyschematism, reformulating his theory
of the plural reality with an epistemological (i.e. no longer ontological) bias, accor-
ding to a claim that reality cannot be formalized. This did not mean, however, that
reality became irrational (contradictory), but only that the process of formalization
cannot be finished. By the same token, Chwistek might have supposed that perhaps
there is some indefinite single reality, although it always manifests itself as a num-
ber of different schemas. This issue will never be resolved, revealing a defensive
moment in the avant-garde thought of Chwistek, who in the 1930s made his pro-
gram of the pluralization and formalization of reality less radical.
What is particularly significant in this aporetic reading of Chwistek’s thought
today is his awareness of the mutual subversion of common sense and quiet folly. He
wrote: “One must, however, remember that all this is a clear negation of the essence
of art. Art is relentlessly coming to grips with reality. Art consists of an illusory
creating of what actually cannot be created. Art operates in that particular domain
of reality which has been systematically destroyed or constrained by the common
sense. This has nothing to do with individual ideas, but with the primary, common
approach to reality, characteristic of everyone before he or she is trained how to
struggle for survival or position in society.” Thus one may realize that the voice, on
behalf of common sense, postulates the elimination of such metaphysical terms as
uniform reality and the essence of art as counterproductive and contradictory,
contrary to the experience of the diverse and changeable reality of art, yet on the
other hand, the same voice accuses common sense of systematically destroying and
restraining of art, which is a clear negation of its essence. What, then, is this voice
speaking for - common sense or the quiet folly? Is it the common sense itself which,
distinguishing the theoretical order from the artistic one, accuses itself of those re-
pressive measures, or is it the quiet folly which, under the cloak of the common sen-
se, develops a commonsensical argument to secure its vested interests? We cannot
continue reading Chwistek’s discourse, since in the course of deconstruction (or schi-
zoidal analysis) we have reached the aporia of the voice, which is unable to choose
either the common sense, or the quiet folly. Rational argument and rhetorical persu-
asion intertwine here in an aporetic whole which cannot be unraveled, for arguments