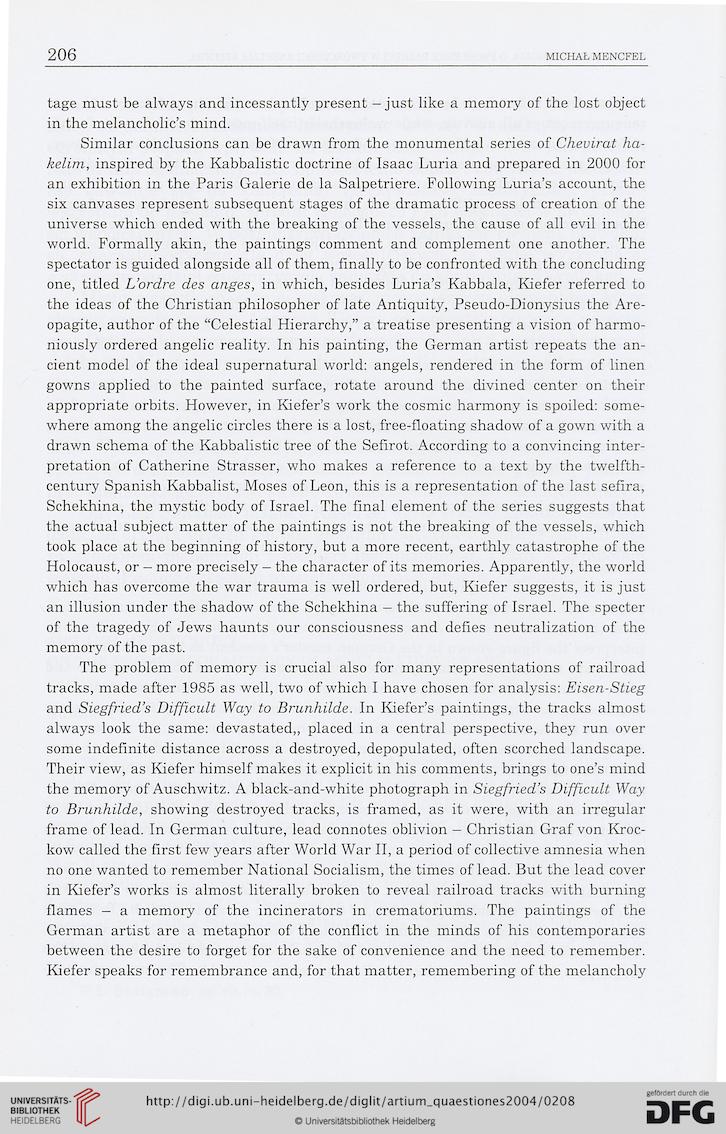 tage must be always and incessantly present - just like a memory of the lost object
in the melancholic’s mind.
Similar conclusions can be drawn from the monumental series of Chevirat ha-
kelim, inspired by the Kabbalistic doctrine of Isaac Luria and prepared in 2000 for
an exhibition in the Paris Galerie de la Salpetriere. Following Luria’s account, the
six canvases represent subsequent stages of the dramatic process of creation of the
universe which ended with the breaking of the vessels, the cause of all evil in the
world. Formally akin, the paintings comment and complement one another. The
spectator is guided alongside all of them, finally to be confronted with the concluding
one, titled L’ordre des anges, in which, besides Luria’s Kabbala, Kiefer referred to
the ideas of the Christian philosopher of late Antiquity, Pseudo-Dionysius the Are-
opagite, author of the “Celestial Hierarchy,” a treatise presenting a vision of harmo-
niously ordered angelic reality. In his painting, the German artist repeats the an-
cient model of the ideal supernatural world: angels, rendered in the form of linen
gowns applied to the painted surface, rotate around the divined center on their
appropriate orbits. However, in Kiefer’s work the cosmic harmony is spoiled: some-
where among the angelic circles there is a lost, free-floating shadow of a gown with a
drawn schema of the Kabbalistic tree of the Sefirot. According to a convincing inter-
pretation of Catherine Strasser, who makes a reference to a text by the twelfth-
century Spanish Kabbalist, Moses of Leon, this is a representation of the last sefira,
Schekhina, the mystic body of Israel. The final element of the series suggests that
the actual subject matter of the paintings is not the breaking of the vessels, which
took place at the beginning of history, but a more recent, earthly catastrophe of the
Holocaust, or — more precisely - the character of its memories. Apparently, the world
which has overcome the war trauma is well ordered, but, Kiefer suggests, it is just
an illusion under the shadow of the Schekhina - the suffering of Israel. The specter
of the tragedy of Jews haunts our consciousness and defies neutralization of the
memory of the past.
The problem of memory is crucial also for many representations of railroad
tracks, made after 1985 as well, two of which I have chosen for analysis: Eisen-Stieg
and Siegfried’s Difficult Way to Brunhilde. In Kiefer’s paintings, the tracks almost
always look the same: devastated,, placed in a central perspective, they run over
some indefinite distance across a destroyed, depopulated, often scorched landscape.
Their view, as Kiefer himself makes it explicit in his comments, brings to one’s mind
the memory of Auschwitz. A black-and-white photograph in Siegfried’s Difficult Way
to Brunhilde, showing destroyed tracks, is framed, as it were, with an irregular
frame of lead. In German culture, lead connotes oblivion - Christian Graf von Kroc-
kow called the first few years after World War II, a period of collective amnesia when
no one wanted to remember National Socialism, the times of lead. But the lead cover
in Kiefer’s works is almost literally broken to reveal railroad tracks with burning
flames - a memory of the incinerators in crematoriums. The paintings of the
German artist are a metaphor of the conflict in the minds of his contemporaries
between the desire to forget for the sake of convenience and the need to remember.
Kiefer speaks for remembrance and, for that matter, remembering of the melancholy