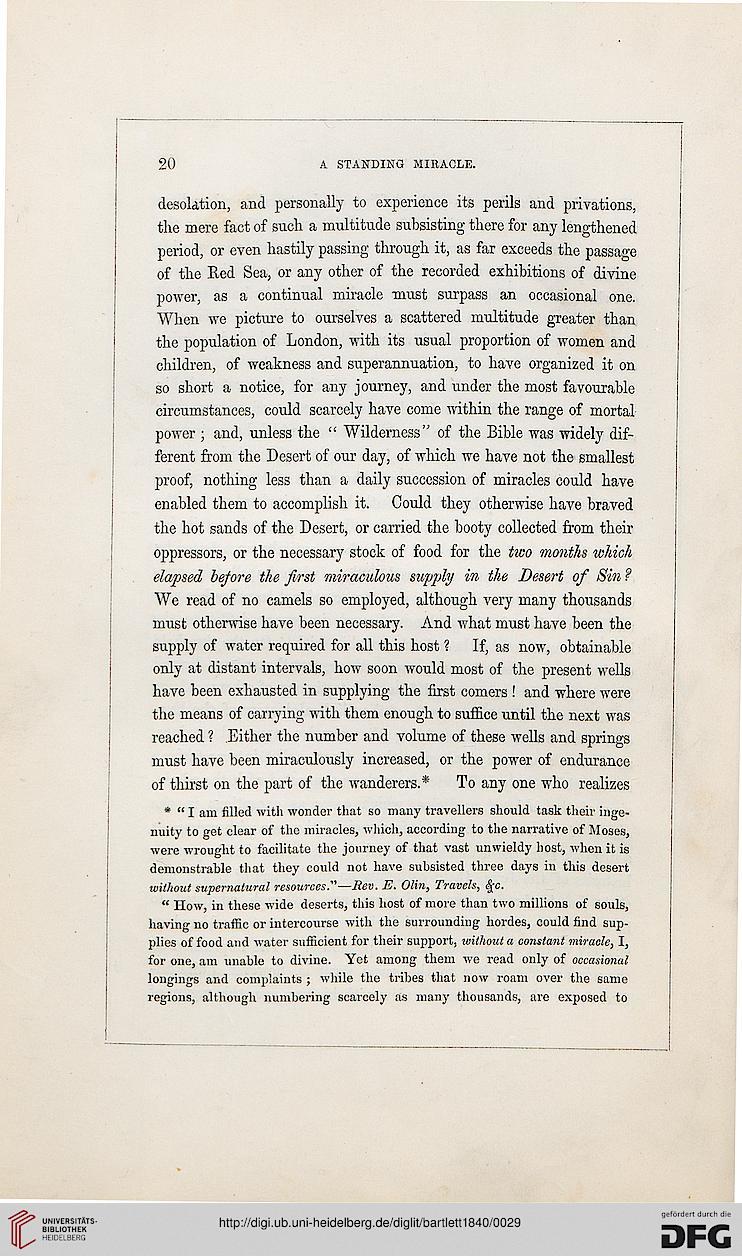 desolation, and personally to experience its perils and privations,
the mere fact of such a multitude subsisting there for any lengthened
period, or even hastily passing through it, as far exceeds the passage
of the Red Sea, or any other of the recorded exhibitions of divine
power, as a continual miracle must surpass an occasional one.
When we picture to ourselves a scattered multitude greater than
the population of London, with its usual proportion of women and
children, of weakness and superannuation, to have organized it on
so short a notice, for any journey, and under the most favourable
circumstances, could scarcely have come within the range of mortal
power ; and, unless the " Wilderness" of the Bible was widely dif-
ferent from the Desert of our day, of which we have not the smallest
proof, nothing less than a daily succession of miracles could have
enabled them to accomplish it. Could they otherwise have braved
the hot sands of the Desert, or carried the booty collected from their
oppressors, or the necessary stock of food for the two months which
elapsed be/ore the first miraculous supply in the Desert of Sin ?
We read of no camels so employed, although very many thousands
must otherwise have been necessary. And what must have been the
supply of water required for all this host ? If, as now, obtainable
only at distant intervals, how soon would most of the present wells
have been exhausted in supplying the first comers ! and where were
the means of carrying with them enough to suffice until the next was
reached ? Either the number and volume of these wells and springs
must have been miraculously increased, or the power of endurance
of thirst on the part of the wanderers.* To any one who realizes

* " I am filled with wonder that so many travellers should task their inge-
nuity to get clear of the miracles, which, according to the narrative of Moses,
were wrought to facilitate the journey of that vast unwieldy host, when it is
demonstrable that they could not have subsisted three days in this desert
without supernatural resources."—Rev. E. Olin, Travels, §c.

" How, in these wide deserts, this host of more than two millions of souls,
having no traffic or intercourse with the surrounding hordes, could find sup-
plies of food and water sufficient for their support, without a constant miracle, I,
for one, am unable to divine. Yet among them we read only of occasional
longings and complaints ; while the tribes that now roam over the same
regions, although numbering scarcely as many thousands, are exposed to