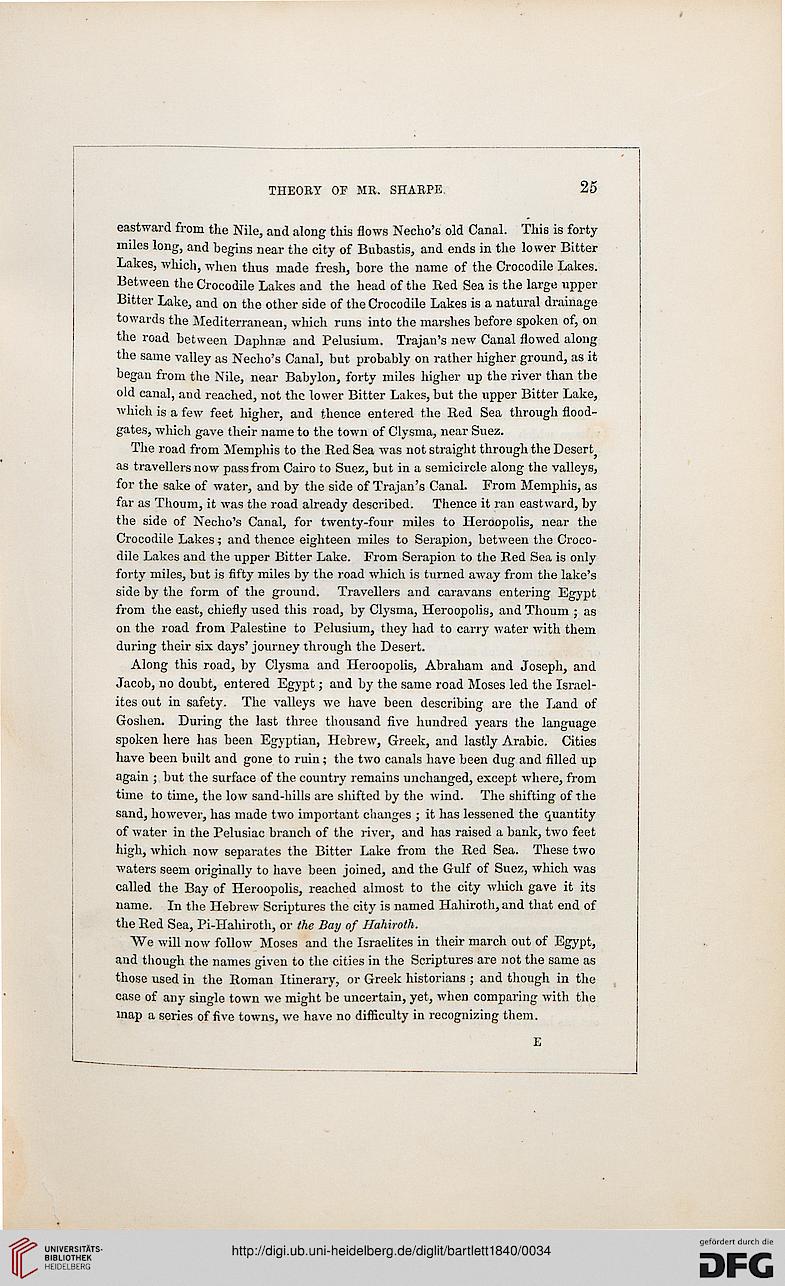 eastward from the Nile, and along this flows Necho's old Canal. This is forty
miles long, and begins near the city of Bubastis, and ends in the lower Bitter
Lakes, which, when thus made fresh, bore the name of the Crocodile Lakes.
Between the Crocodile Lakes and the head of the Red Sea is the large upper
Bitter Lake, and on the other side of the Crocodile Lakes is a natural drainage
towards the Mediterranean, which runs into the marshes before spoken of, on
the road between Daphnaj and Pelusium. Trajan's new Canal flowed along
the same valley as Necho's Canal, but probably on rather higher ground, as it
began from the Nile, near Babylon, forty miles higher up the river than the
old canal, and reached, not the lower Bitter Lakes, but the upper Bitter Lake,
which is a few feet higher, and thence entered the Rod Sea through flood-
gates, which gave their name to the town of Clysma, near Suez.

The road from Memphis to the Red Sea was not straight through the Desert;
as travellers now pass from Cairo to Suez, but in a semicircle along the valleys,
for the sake of water, and by the side of Trajan's Canal. From Memphis, as
far as Thoum, it was the road already described. Thence it ran eastward, by
the side of Necho's Canal, for twenty-four miles to Heroopolis, near the
Crocodile Lakes ; and thence eighteen miles to Serapion, between the Croco-
dile Lakes and the upper Bitter Lake. From Serapion to the Red Sea is only
forty miles, but is fifty miles by the road which is turned away from the lake's
side by the form of the ground. Travellers and caravans entering Egypt
from the east, chiefly used this road, by Clysma, Heroopolis, and Thoum ; as
on the road from Palestine to Pelusium, they had to carry water with them
during their six days' journey through the Desert.

Along this road, by Clysma and Heroopolis, Abraham and Joseph, and
Jacob, no doubt, entered Egypt; and by the same road Moses led the Israel-
ites out in safety. The valleys we have been describing are the Land of
Goshen. During the last three thousand five hundred years the language
spoken here has been Egyptian, Hebrew, Greek, and lastly Arabic. Cities
have been built and gone to ruin; the two canals have been dug and filled up
again ; but the surface of the country remains unchanged, except where, from
time to time, the low sand-hills are shifted by the wind. The shifting of the
sand, however, has made two important changes ; it has lessened the quantity
of water in the Pelusiac branch of the river, and has raised a bank, two feet
high, which now separates the Bitter Lake from the Red Sea. These two
waters seem originally to have been joined, and the Gulf of Suez, which was
called the Bay of Heroopolis, reached almost to the city which gave it its
name. In the Hebrew Scriptures the city is named Hahiroth, and that end of
the Red Sea, Pi-Hahiroth, or the Bay of Hahiroth.

We will now follow Moses and the Israelites in their march out of Egypt,
and though the names given to the cities in the Scriptures are not the same as
those used in the Roman Itinerary, or Greek historians ; and though in the
case of any single town we might be uncertain, yet, when comparing with the
map a series of five towns, we have no difficulty in recognizing them.