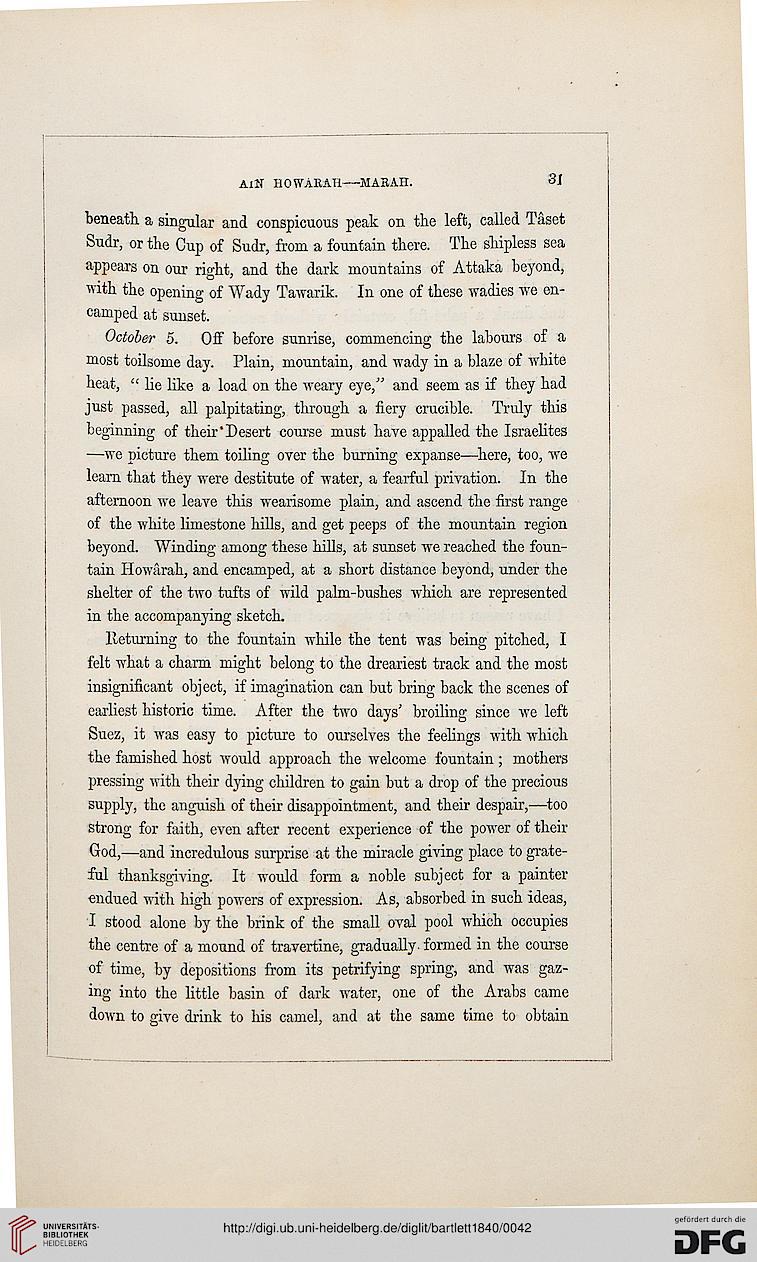 beneath a singular and conspicuous peak on the left, called Taset
Sudr, or the Cup of Sudr, from a fountain there. The shipless sea
appears on our right, and the dark mountains of Attaka beyond,
with the opening of Wady Tawarik. In one of these wadies we en-
camped at sunset.

October 5. Off before sunrise, commencing the labours of a
most toilsome day. Plain, mountain, and wady in a blaze of white
heat, " lie like a load on the weary eye," and seem as if they had
just passed, all palpitating, through a fiery crucible. Truly this
beginning of their'Desert course must have appalled the Israelites
—we picture them toiling over the burning expanse—here, too, we
learn that they were destitute of water, a fearful privation. In the
afternoon we leave this wearisome plain, and ascend the first range
of the white limestone hills, and get peeps of the mountain region
beyond. Winding among these hills, at sunset we reached the foun-
tain Howarah, and encamped, at a short distance beyond, under tbe
sbelter of the two tufts of wild palm-bushes which are represented
in the accompanying sketch.

Returning to the fountain while the tent was being pitched, I
felt what a charm might belong to the dreariest track and the most
insignificant object, if imagination can but bring back the scenes of
earliest historic time. After the two days' broiling since we left
Suez, it was easy to picture to ourselves the feelings with which
the famished host would approach the welcome fountain ; mothers
pressing with their dying children to gain but a drop of the precious
supply, the anguish of their disappointment, and their despair,—too
strong for faith, even after recent experience of the power of their
God,—and incredulous surprise at the miracle giving place to grate-
ful thanksgiving. It would form a noble subject for a painter
endued with high powers of expression. As, absorbed in such ideas,
I stood alone by the brink of the small oval pool which occupies
tbe centre of a mound of travertine, gradually formed in the course
of time, by depositions from its petrifying spring, and was gaz-
ing into the little basin of dark water, one of the Arabs came
down to give drink to his camel, and at the same time to obtain