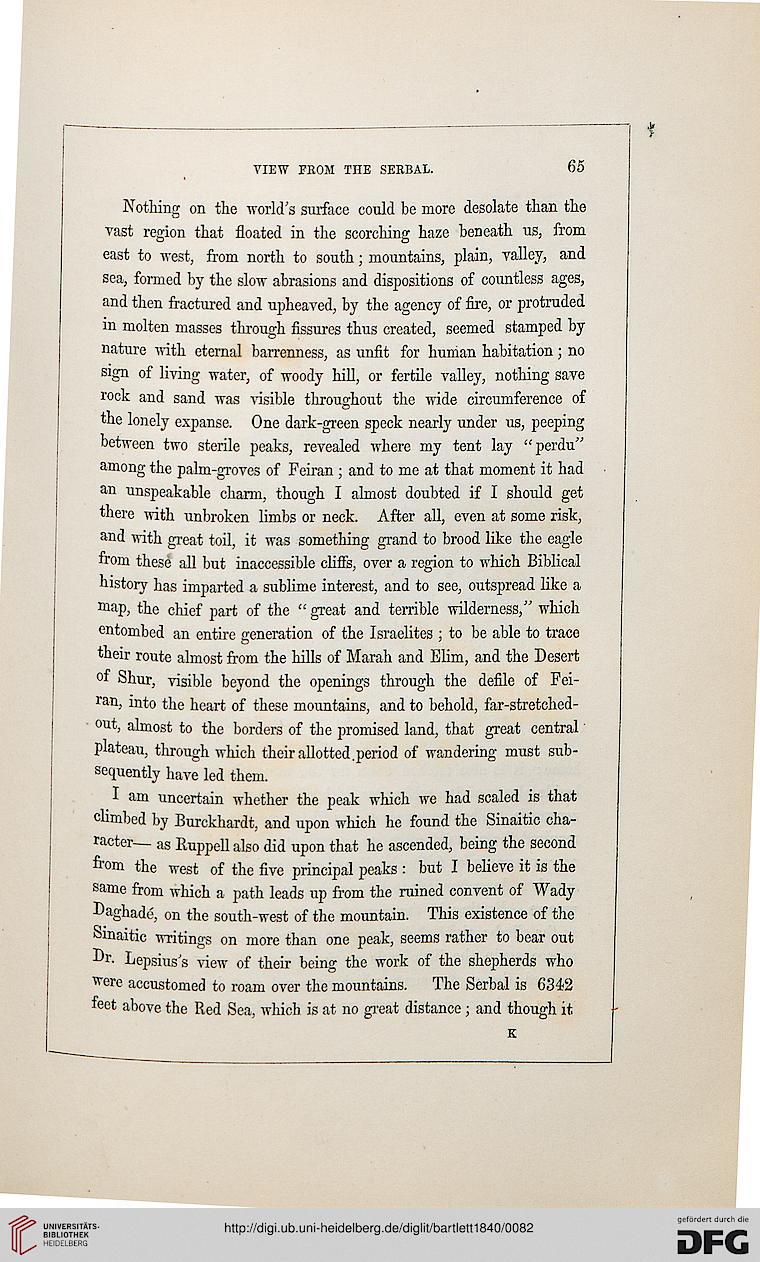 Nothing on the world's surface could be more desolate than the
vast region that floated in the scorching haze beneath us, from
east to west, from north to south; mountains, plain, valley, and
sea, formed by the slow abrasions and dispositions of countless ages,
and then fractured and upheaved, by the agency of fire, or protruded
in molten masses through fissures thus created, seemed stamped by
nature with eternal barrenness, as unfit for human habitation; no
sign of living water, of woody hill, or fertile valley, nothing save
rock and sand was visible throughout the wide circumference of
the lonely expanse. One dark-green speck nearly under us, peeping
between two sterile peaks, revealed where my tent lay "perdu"
among the palm-groves of Feiran ; and to me at that moment it had
an unspeakable charm, though I almost doubted if I should get
there with unbroken limbs or neck. After all, even at some risk,
and with great toil, it was something grand to brood like the eagle
from these all but inaccessible cliffs, over a region to which Biblical
history has imparted a sublime interest, and to see, outspread like a
map, the chief part of the "great and terrible wilderness," which
entombed an entire generation of the Israelites ; to be able to trace
their route almost from the hills of Marah and Elim, and the Desert
of Shur, visible beyond the openings through the defile of Fei-
ran, into the heart of these mountains, and to behold, far-stretched-
°ut, almost to the borders of the promised land, that great central
plateau, through which their allotted.period of wandering must sub-
sequently have led them.

I am uncertain whether the peak which we had scaled is that
climbed by Burckhardt, and upon which he found the Sinaitic cha-
racter— as Ruppell also did upon that he ascended, being the second
from the west of the five principal peaks : but I believe it is the
same from which a path leads up from the ruined convent of Wady
Daghade, on the south-west of the mountain. This existence of the
Sinaitic writings on more than one peak, seems rather to bear out
-D1'- Lepsius's view of their being the work of the shepherds who
were accustomed to roam over the mountains. The Serbal is 6342
feet above the Red Sea, which is at no great distance ; and though it