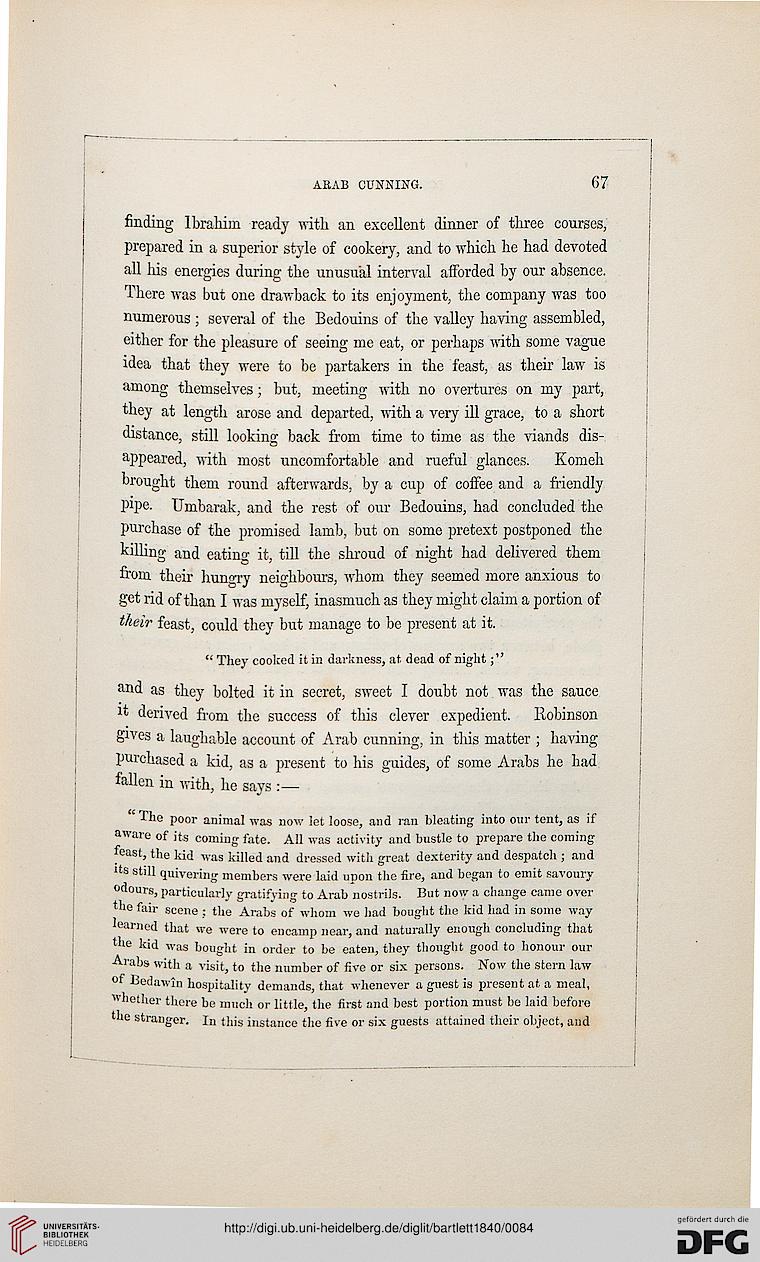 finding Ibrahim ready with an excellent dinner of three courses,
prepared in a superior style of cookery, and to which he had devoted
all his energies during the unusual interval afforded by our absence.
There was but one drawback to its enjoyment, the company was too
numerous ; several of the Bedouins of the valley having assembled,
either for the pleasure of seeing me eat, or perhaps with some vague
idea that they were to be partakers in the feast, as their law is
among themselves; but, meeting with no overtures on my part,
they at length arose and departed, with a very ill grace, to a short
distance, still looking back from time to time as the viands dis-
appeared, with most uncomfortable and rueful glances. Komeh
brought them round afterwards, by a cup of coffee and a friendly
pipe. Umbarak, and the rest of our Bedouins, had concluded the
purchase of the promised lamb, but on some pretext postponed the
killing and eating it, till the shroud of night had delivered them
from their hungry neighbours, whom they seemed more anxious to
get rid of than I was myself, inasmuch as they might claim a portion of
their feast, could they but manage to be present at it.

" They cooked it in darkness, at dead of night;"

and as they bolted it in secret, sweet I doubt not was the sauce
it derived from the success of this clever expedient. llobinson
gives a laughable account of Arab cunning, in this matter ; having
purchased a kid, as a present to his guides, of some Arabs he had
fallen in with, he says :—

The poor animal was now let loose, and ran bleating into our tent, as if
aware of its coming fate. All was activity and bustle to prepare the coming
feast, the kid was killed and dressed with great dexterity and despatch ; and
'ts still quivering members were laid upon the fire, and began to emit savoury
odours, particularly gratifying to Arab nostrils. But now a change came over
the fair scene : the Arabs of whom we had bought the kid had in some way
learned that we were to encamp near, and naturally enough concluding that
le Wd was bought in order to be eaten, they thought good to honour our
Arabs with a visit, to the number of five or six persons. Now the stern law
°f Bedawin hospitality demands, that whenever a guest is present at a meal,
whether there be much or little, the first and best portion must be laid before
the stranger. In this instance the five or six guests attained their object, and