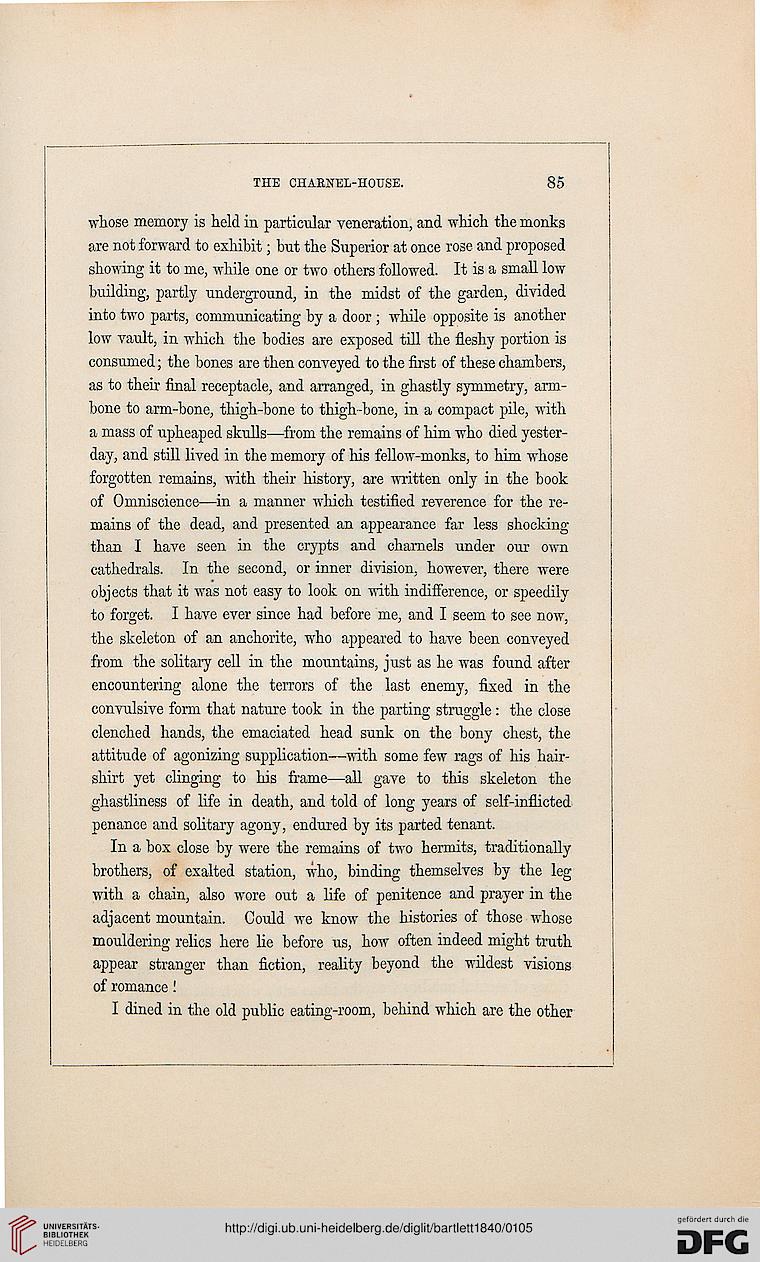 Information about OCR text
THE CHARNEL-HOUSE. 85

whose memory is held in particular veneration, and which the monks
are not forward to exhibit; but the Superior at once rose and proposed
showing it to me, while one or two others followed. It is a small low
building, partly underground, in the midst of the garden, divided
into two parts, communicating by a door; while opposite is another
low vault, in which the bodies are exposed till the fleshy portion is
consumed; the bones are then conveyed to the first of these chambers,
as to their final receptacle, and arranged, in ghastly symmetry, arm-
bone to arm-bone, thigh-bone to thigh-bone, in a compact pile, with
a mass of upheaped skulls—from the remains of him who died yester-
day, and still lived in the memory of his fellow-monks, to him whose
forgotten remains, with their history, are written only in the book
of Omniscience—in a manner which testified reverence for the re-
mains of the dead, and presented an appearance far less shocking
than I have seen in the crypts and chamels under our own
cathedrals. In the second, or inner division, however, there were
objects that it was not easy to look on with indifference, or speedily
to forget. I have ever since had before me, and I seem to see now,
the skeleton of an anchorite, who appeared to have been conveyed
from the solitary cell in the mountains, just as he was found after
encountering alone the terrors of the last enemy, fixed in the
convulsive form that nature took in the parting struggle: the close
clenched hands, the emaciated head sunk on the bony chest, the
attitude of agonizing supplication—with some few rags of his hair-
shirt yet clinging to his frame—all gave to this skeleton the
ghastliness of life in death, and told of long years of self-inflicted
penance and solitary agony, endured by its parted tenant.

In a box close by were the remains of two hermits, traditionally
brothers, of exalted station, who, binding themselves by the leg
with a chain, also wore out a life of penitence and prayer in the
adjacent mountain. Could we know the histories of those whose
mouldering relics here lie before us, how often indeed might truth
appear stranger than fiction, reality beyond the wildest visions
of romance !

I dined in the old public eating-room, behind which are the other