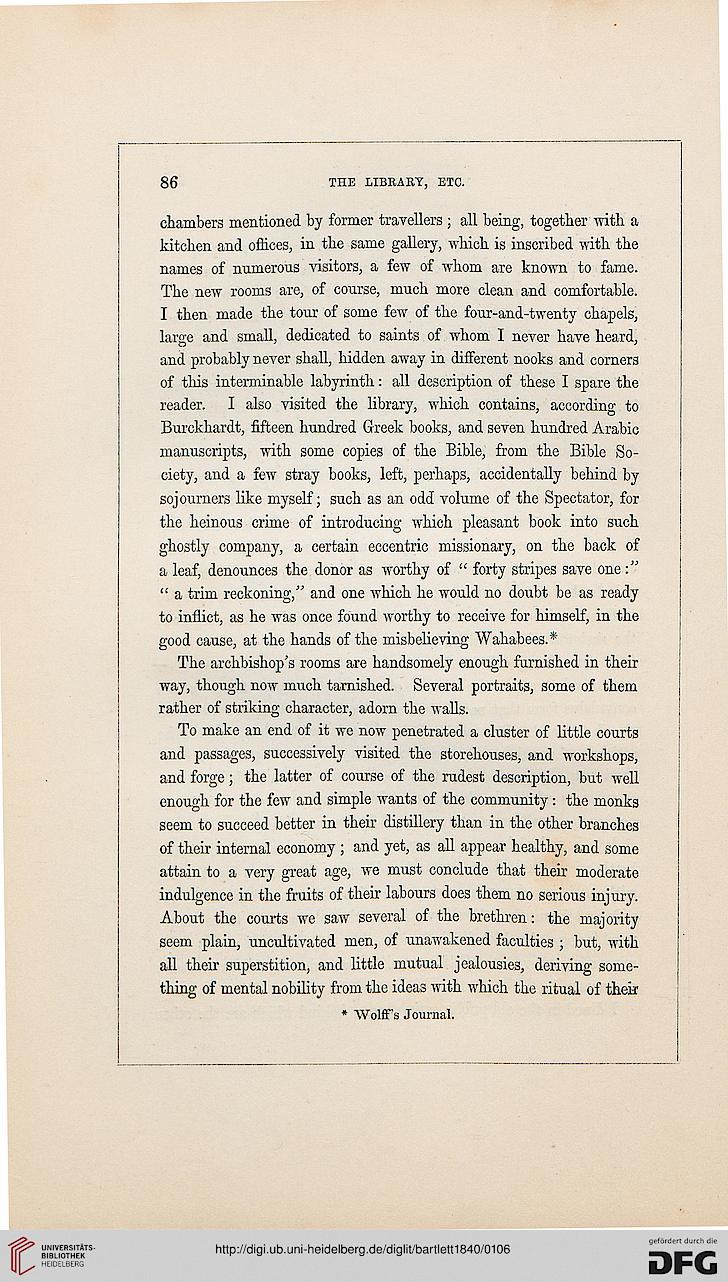 chambers mentioned by former travellers ; all being, together with a
kitchen and offices, in the same gallery, which is inscribed with the
names of numerous visitors, a few of whom are known to fame.
The new rooms are, of course, much more clean and comfortable.
I then made the tour of some few of the four-and-twenty chapels,
large and small, dedicated to saints of whom I never have heard,
and probably never shall, hidden away in different nooks and corners
of this interminable labyrinth: all description of these I spare the
reader. I also visited the library, which contains, according to
Burekhardt, fifteen hundred Greek books, and seven hundred Arabic
manuscripts, with some copies of the Bible, from the Bible So-
ciety, and a few stray books, left, perhaps, accidentally behind by
sojourners like myself; such as an odd volume of the Spectator, for
the heinous crime of introducing which pleasant book into such
ghostly company, a certain eccentric missionary, on the back of
a leaf, denounces the donor as worthy of " forty stripes save one:"
" a trim reckoning," and one which he would no doubt be as ready
to inflict, as he was once found worthy to receive for himself, in the
good cause, at the hands of the misbelieving Wahabees.*

The archbishop's rooms are handsomely enough furnished in their
way, though now nrach tarnished. Several portraits, some of them
rather of striking character, adorn the walls.

To make an end of it we now penetrated a cluster of little courts
and passages, successively visited the storehouses, and workshops,
and forge; the latter of course of the rudest description, but well
enough for the few and simple wants of the community: the monks
seem to succeed better in their distillery than in the other branches
of their internal economy ; and yet, as all appear healthy, and some
attain to a very great age, we must conclude that their moderate
indulgence in the fruits of their labours does them no serious injury.
About the courts we saw several of the brethren: the majority
seem plain, uncultivated men, of unawakened faculties ; but, with
all their superstition, and little mutual jealousies, deriving some-
thing of mental nobility from the ideas with which the ritual of their
* Wolff's Journal.