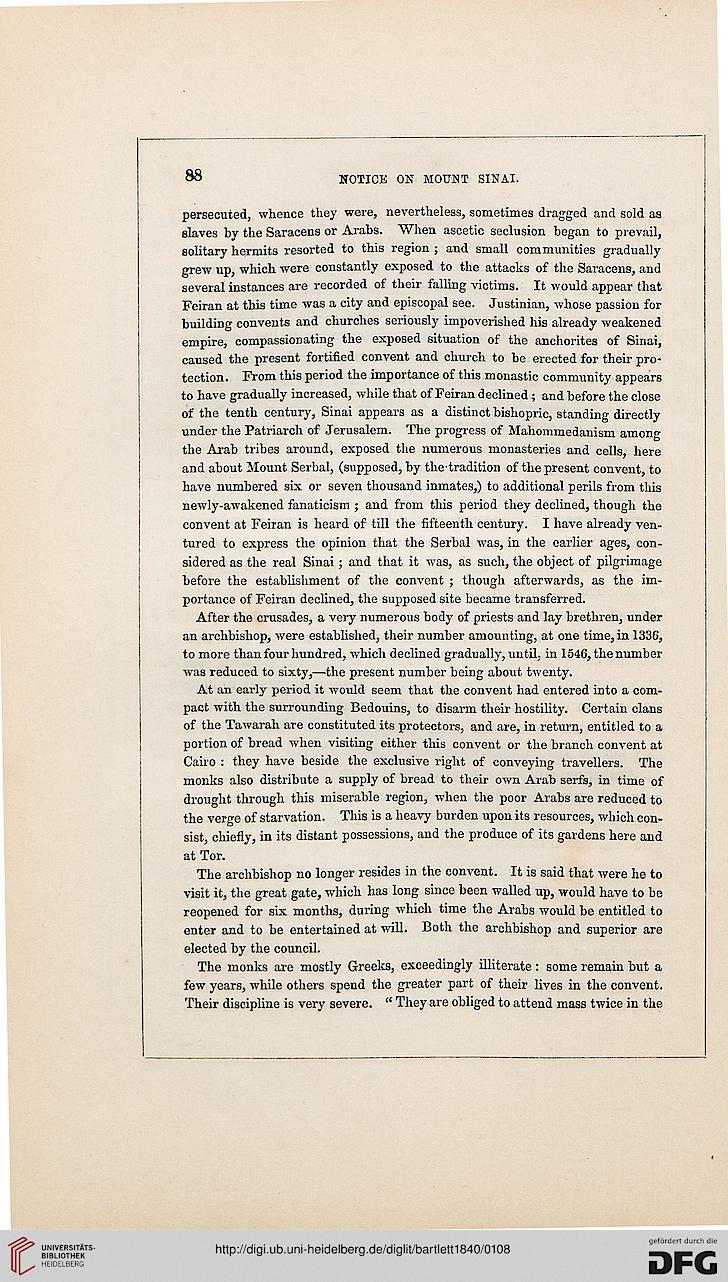 persecuted, whence they were, nevertheless, sometimes dragged and sold as
slaves by the Saracens or Arabs. When ascetic seclusion began to prevail,
solitary hermits resorted to this region ; and small communities gradually
grew up, which were constantly exposed to the attacks of the Saracens, and
several instances are recorded of their falling victims. It would appear that
Feiran at this time was a city and episcopal see. Justinian, whose passion for
building convents and churches seriously impoverished his already weakened
empire, compassionating the exposed situation of the anchorites of Sinai,
caused the present fortified convent and church to be erected for their pro-
tection. From this period the importance of this monastic community appears
to have gradually increased, while that of Feiran declined ; and before the close
of the tenth century, Sinai appears as a distinct bishopric, standing directly
under the Patriarch of Jerusalem. The progress of Mahommedanism amono-
the Arab tribes around, exposed the numerous monasteries and cells here
and about Mount Serbal, (supposed, by thetradition of the present convent to
have numbered six or seven thousand inmates,) to additional perils from this
newly-awakened fanaticism ; and from this period they declined, though the
convent at Feiran is heard of till the fifteenth century. I have already ven-
tured to express the opinion that the Serbal was, in the earlier ages, con-
sidered as the real Sinai; and that it was, as such, the object of pilgrimage
before the establishment of the convent ; though afterwards, as the im-
portance of Feiran declined, the supposed site became transferred.

After the crusades, a very numerous body of priests and lay brethren, under
an archbishop, were established, their number amounting, at one time, in 1330,
to more than four hundred, which declined gradually, until, in 1546, the number
was reduced to sixty,—the present number being about twenty.

At an early period it would seem that the convent had entered into a com-
pact with the surrounding Bedouins, to disarm their hostility. Certain clans
of the Tawarah are constituted its protectors, and are, in return, entitled to a
portion of bread when visiting either this convent or the branch convent at
Cairo : they have beside the exclusive right of conveying travellers. The
monks also distribute a supply of bread to their own Arab serfs, in time of
drought through this miserable region, when the poor Arabs are reduced to
the verge of starvation. This is a heavy burden upon its resources, which con-
sist, chiefly, in its distant possessions, and the produce of its gardens here and
at Tor.

The archbishop no longer resides in the convent. It is said that were he to
visit it, the great gate, which has long since been walled up, would have to be
reopened for six months, during which time the Arabs would be entitled to
enter and to be entertained at will. Both the archbishop and superior are
elected by the council.

The monks are mostly Greeks, exceedingly illiterate : some remain but a
few years, while others spend the greater part of their lives in the convent.
Their discipline is very severe. " They are obliged to attend mass twice in the