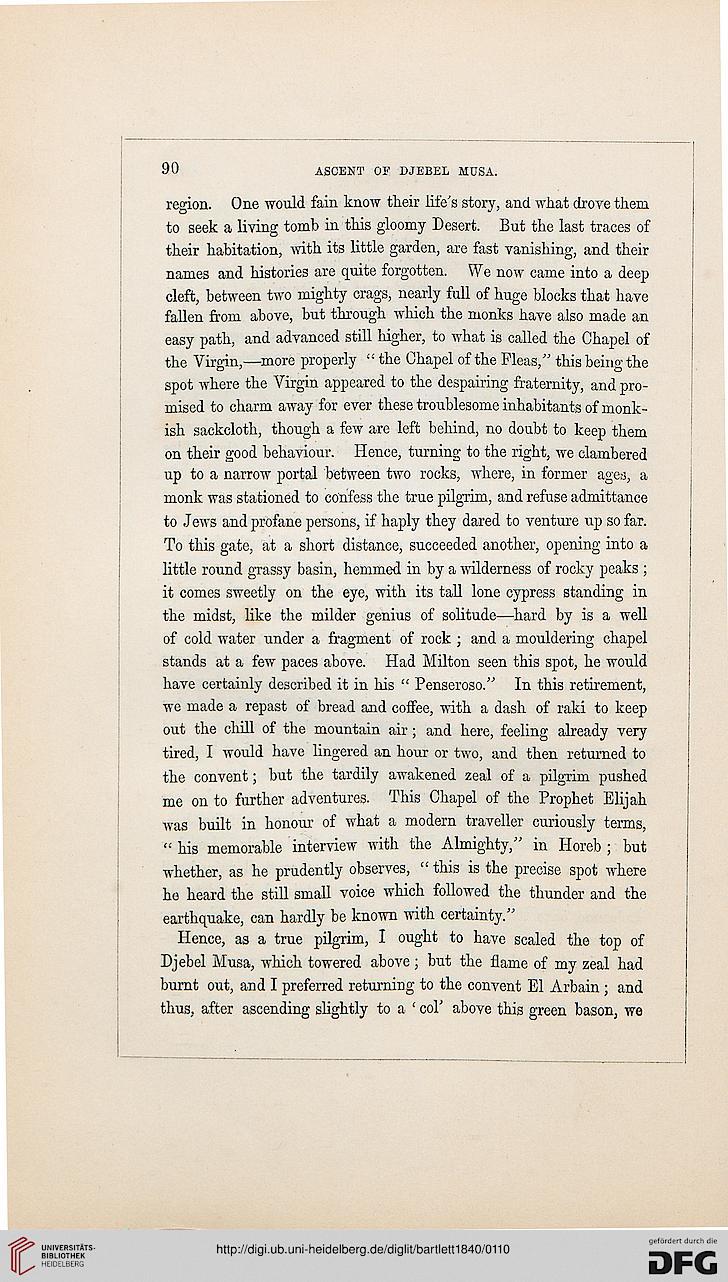 re°ion One would fain know their life's story, and what drove them
to seek a livino- tomb in this gloomy Desert. But the last traces of
their habitation, with its little garden, are fast vanishing, and their
names and histories are quite forgotten. We now came into a deep
cleft between two mighty crags, nearly full of huge blocks that have
fallen from above, but through which the monks have also made an
easy path, and advanced still higher, to what is called the Chapel of
the Virgin,—more properly " the Chapel of the Fleas," this being the
spot where the Virgin appeared to the despairing fraternity, and pro-
mised to charm away for ever these troublesome inhabitants of monk-
ish sackcloth, though a few are left behind, no doubt to keep them
on their good behaviour. Hence, turning to the right, we clambered
up to a narrow portal between two rocks, where, in former ages, a
monk was stationed to confess the true pilgrim, and refuse admittance
to Jews and profane persons, if haply they dared to venture up so far.
To this gate, at a short distance, succeeded another, opening into a
little round grassy basin, hemmed in by a wilderness of rocky peaks ;
it comes sweetly on the eye, with its tall lone cypress standing in
the midst, like the milder genius of solitude—hard by is a well
of cold water under a fragment of rock ; and a mouldering chapel
stands at a few paces above. Had Milton seen this spot, he would
have certainly described it in his " Penseroso." In this retirement,
we made a repast of bread and coffee, with a dash of raki to keep
out the chill of the mountain air; and here, feeling already very
tired, I would have lingered an hour or two, and then returned to
the convent; but the tardily awakened zeal of a pilgrim pushed
me on to further adventures. This Chapel of the Prophet Elijah
was built in honour of what a modern traveller curiously terms,
"his memorable interview with the Almighty," in Horeb ; but
whether, as he prudently observes, " this is the precise spot where
he heard the still small voice which followed the thunder and the
earthquake, can hardly be known with certainty."

Hence, as a true pilgrim, I ought to have scaled the top of
Djebel Musa, which towered above; but the flame of my zeal had
burnt out, and I preferred returning to the convent El Arbain ; and
thus, after ascending slightly to a ' coP above this green bason, we