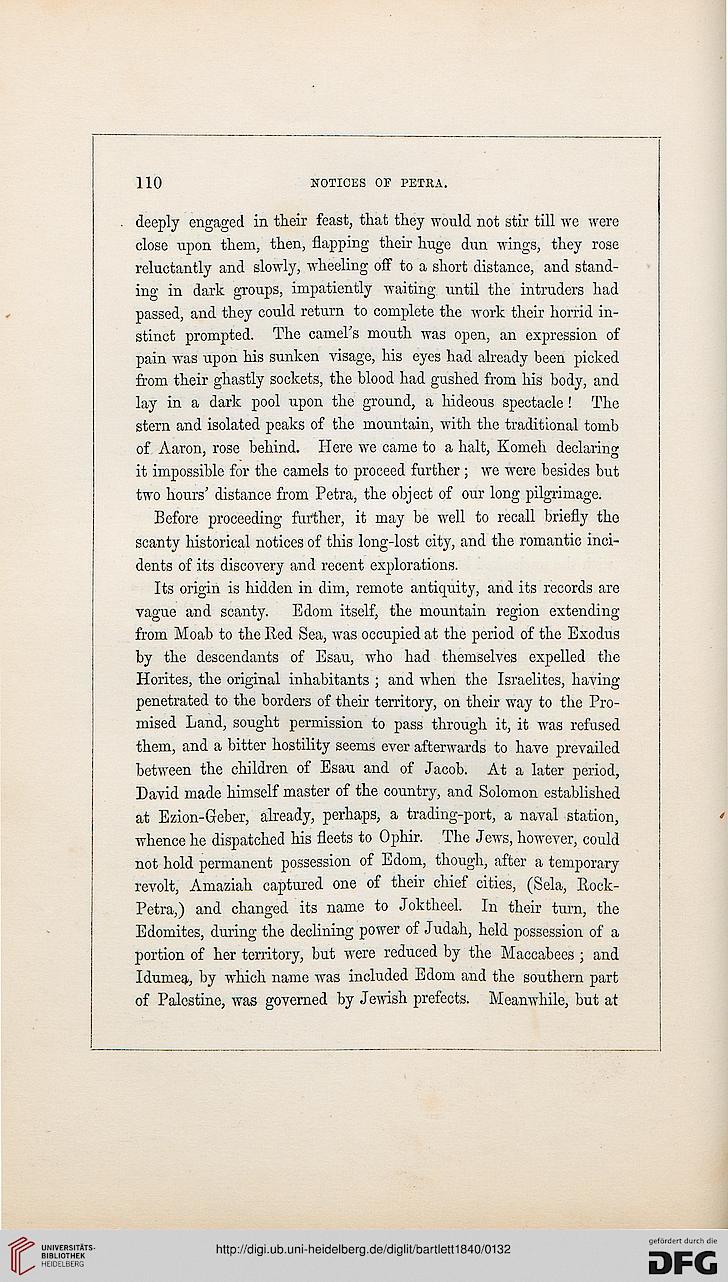 deeply engaged in their feast, that they would not stir till we were
close upon them, then, flapping their huge dun wings, they rose
reluctantly and slowly, wheeling off to a short distance, and stand-
ing in dark groups, impatiently waiting until the intruders had
passed, and they could return to complete the work their horrid in-
stinct prompted. The camel's mouth was open, an expression of
pain was upon his sunken visage, his eyes had already been picked
from their ghastly sockets, the blood had gushed from his body, and
lay in a dark pool upon the ground, a hideous spectacle ! The
stern and isolated peaks of the mountain, with the traditional tomb
of Aaron, rose behind. Here we came to a halt, Komeh declaring
it impossible for the camels to proceed further ; we were besides but
two hours' distance from Petra, the object of our long pilgrimage.

Before proceeding further, it may be well to recall briefly the
scanty historical notices of this long-lost city, and the romantic inci-
dents of its discovery and recent explorations.

Its origin is hidden in dim, remote antiquity, and its records are
vague and scanty. Edom itself, the mountain region extending
from Moab to the Red Sea, was occupied at the period of the Exodus
by the descendants of Esau, who had themselves expelled the
Horites, the original inhabitants ; and when the Israelites, having
penetrated to the borders of their territory, on their way to the Pro-
mised Land, sought permission to pass through it, it was refused
them, and a bitter hostility seems ever afterwards to have prevailed
between the children of Esau and of Jacob. At a later period,
David made himself master of the country, and Solomon established
at Ezion-Geber, already, perhaps, a trading-port, a naval station,
whence he dispatched his fleets to Ophir. The Jews, however, could
not hold permanent possession of Edom, though, after a temporary
revolt, Amaziah captured one of their chief cities, (Sela, Rock-
Petra,) and changed its name to Joktheel. In their turn, the
Edomites, during the declining power of Judah, held possession of a
portion of her territory, but were reduced by the Maccabees ; and
Idumea, by which name was included Edom and the southern part
of Palestine, was governed by Jewish prefects. Meanwhile, but at