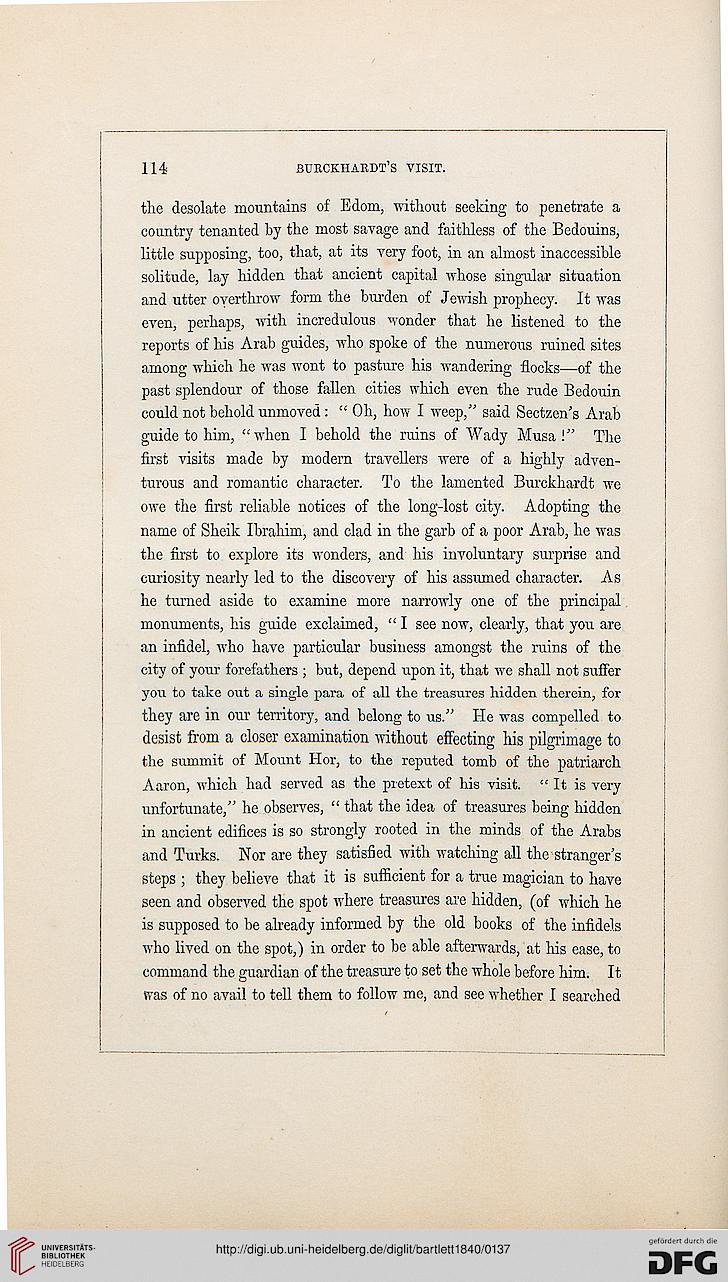 the desolate mountains of Edom, without seeking to penetrate a
country tenanted by the most savage and faithless of the Bedouins,
little supposing, too, that, at its very foot, in an almost inaccessible
solitude, lay hidden that ancient capital whose singular situation
and utter overthrow form the burden of Jewish prophecy. It was
even, perhaps, with incredulous wonder that he listened to the
reports of his Arab guides, who spoke of the numerous ruined sites
among which he was wont to pasture his wandering flocks—-of the
past splendour of those fallen cities which even the rude Bedouin
could not behold unmoved : " Oh, how I weep," said Sectzen's Arab
guide to him, "when I behold the ruins of Wady Musa \" The
first visits made by modern travellers were of a highly adven-
turous and romantic character. To the lamented Burckhardt we
owe the first reliable notices of the long-lost city. Adopting the
name of Sheik Ibrahim, and clad in the garb of a poor Arab, he was
the first to explore its wonders, and his involuntary surprise and
curiosity nearly led to the discovery of his assumed character. As
he turned aside to examine more narrowly one of the principal
monuments, his guide exclaimed, " I see now, clearly, that you are
an infidel, who have particular business amongst the ruins of the
city of your forefathers ; but, depend upon it, that we shall not suffer
you to take out a single para of all the treasures hidden therein, for
they are in our territory, and belong to us." He was compelled to
desist from a closer examination without effecting his pilgrimage to
the summit of Mount Hor, to the reputed tomb of the patriarch
Aaron, which had served as the pretext of his visit. " It is very
unfortunate," he observes, " that the idea of treasures being hidden
in ancient edifices is so strongly rooted in the minds of the Arabs
and Turks. Nor are they satisfied with watching all the stranger's
steps ; they believe that it is sufficient for a true magician to have
seen and observed the spot where treasures are hidden, (of which he
is supposed to be already informed by the old books of the infidels
who lived on the spot,) in order to be able afterwards, at his ease, to
command the guardian of the treasure to set the whole before him. It
vras of no avail to tell them to follow me, and see whether I searched