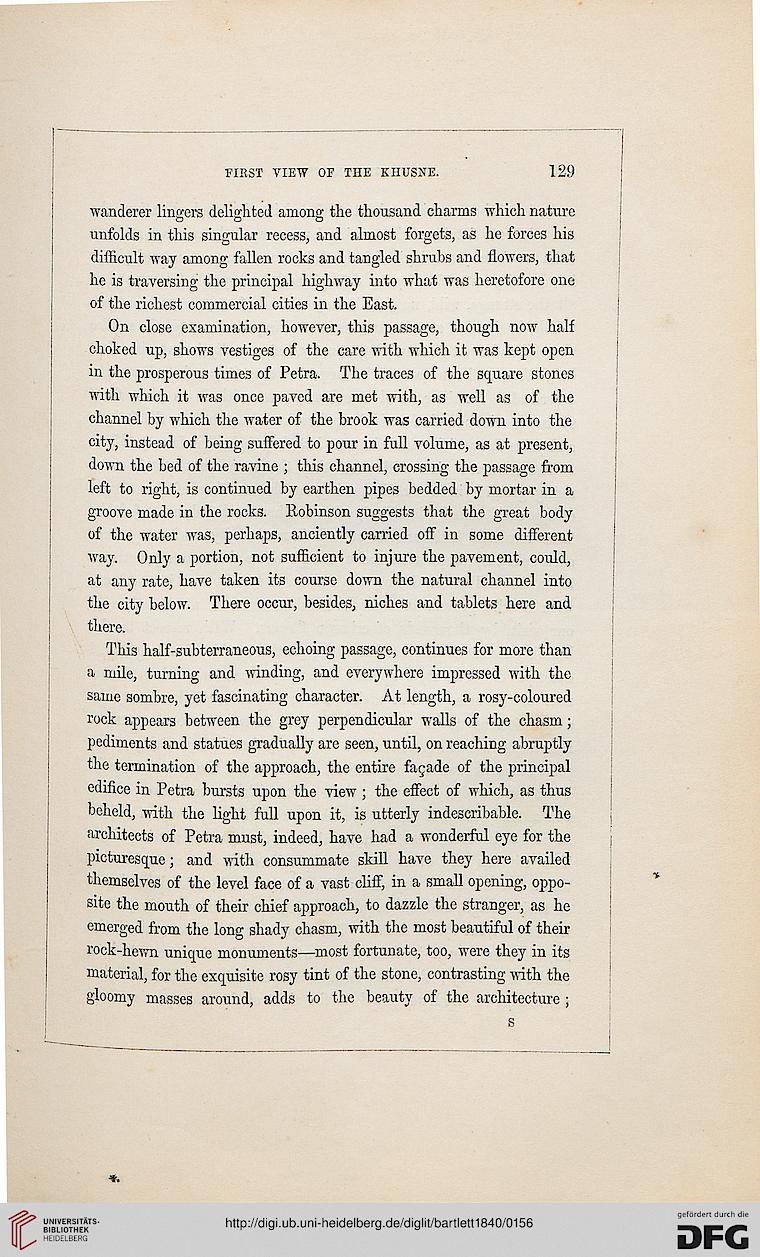 Information about OCR text
FIRST VIEW OF THE KHUSNE. 129

wanderer lingers delighted among the thousand charms which nature
unfolds in this singular recess, and almost forgets, as he forces his
difficult way among fallen rocks and tangled shrubs and flowers, that
he is traversing the principal highway into what was heretofore one
of the richest commercial cities in the East.

On close examination, however, this passage, though now half
choked up, shows vestiges of the care with which it was kept open
in the prosperous times of Petra. The traces of the square stones
with which it was once paved are met with, as well as of the
channel by which the water of the brook was carried down into the
city, instead of being suffered to pour in full volume, as at present,
down the bed of the ravine ; this channel, crossing the passage from
left to right, is continued by earthen pipes bedded by mortar in a
groove made in the rocks. Robinson suggests that the great body
of the water was, perhaps, anciently earned off in some different
way. Only a portion, not sufficient to injure the pavement, could,
at any rate, have taken its course down the natural channel into
the city below. There occur, besides, niches and tablets here and
there.

This half-subterraneous, echoing passage, continues for more than
a mile, turning and winding, and everywhere impressed with the
same sombre, yet fascinating character. At length, a rosy-coloured
rock appears between the grey perpendicular walls of the chasm;
pediments and statues gradually are seen, until, on reaching abruptly
the termination of the approach, the entire fagade of the principal
edifice in Petra bursts upon the view ; the effect of which, as thus
beheld, with the light full upon it, is utterly indescribable. The
architects of Petra must, indeed, have had a wonderful eye for the
picturesque; and with consummate skill have they here availed
themselves of the level face of a vast cliff, in a small opening, oppo-
site the mouth of their chief approach, to dazzle the stranger, as he
emerged from the long shady chasm, with the most beautiful of their
rock-hewn unique monuments—most fortunate, too, were they in its
material, for the exquisite rosy tint of the stone, contrasting with the
gloomy masses around, adds to the beauty of the architecture ;