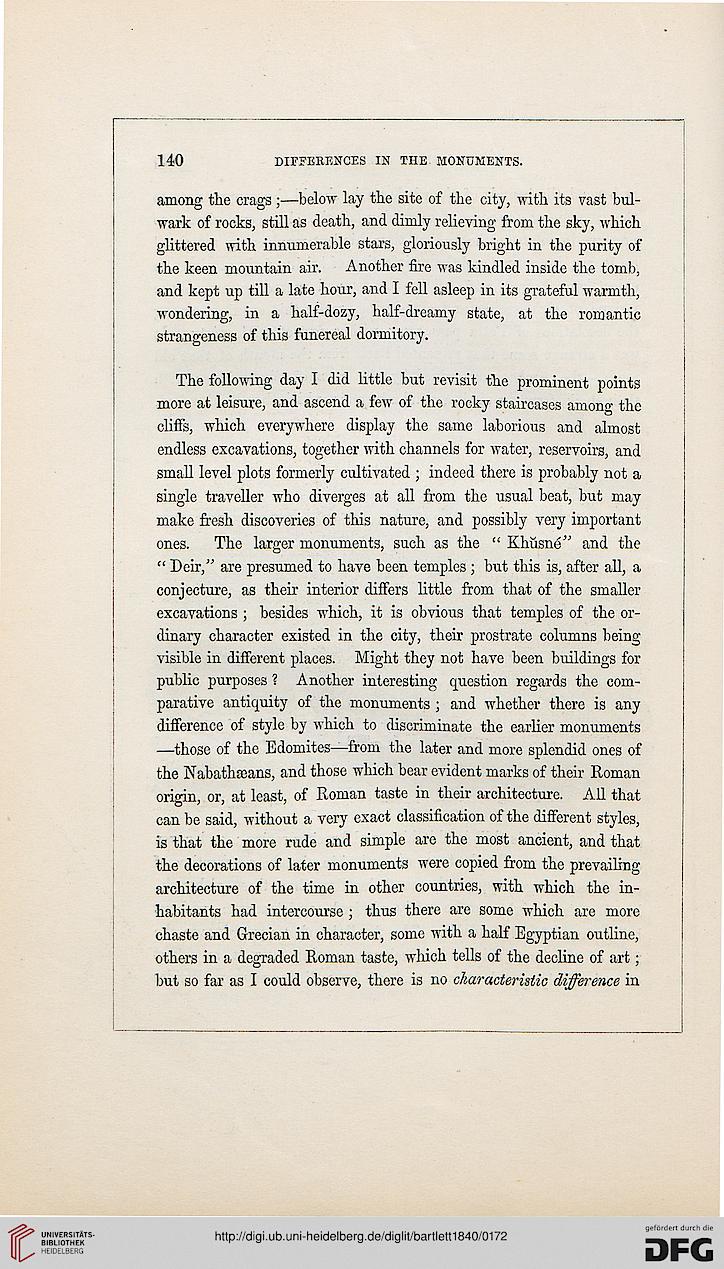 Information about OCR text
140 DIFFERENCES IN THE MONUMENTS.

among the crags ;—below lay the site of the city, with its vast bul-
wark of rocks, still as death, and dimly relieving from the sky, which
glittered with innumerable stars, gloriously bright in the purity of
the keen mountain air. Another fire was kindled inside the tomb,
and kept up till a late hour, and I fell asleep in its grateful warmth,
wondering, in a half-dozy, half-dreamy state, at the romantic
strangeness of this funereal dormitory.

The following day I did little but revisit the prominent points
more at leisure, and ascend a few of the rocky staircases among the
cliffs, which everywhere display the same laborious and almost
endless excavations, together with channels for water, reservoirs, and
small level plots formerly cultivated ; indeed there is probably not a
single traveller who diverges at all from the usual beat, but may
make fresh discoveries of this nature, and possibly very important
ones. The larger monuments, such as the " Khusne" and the
" Dcir," are presumed to have been temples ; but this is, after all, a
conjecture, as their interior differs little from that of the smaller
excavations ; besides which, it is obvious that temples of the or-
dinary character existed in the city, their prostrate columns being
visible in different places. Might they not have been buildings for
public purposes ? Another interesting question regards the com-
parative antiquity of the monuments ; and whether there is any
difference of style by which to discriminate the earlier monuments
—those of the Edomites—from the later and more splendid ones of
the Nabathaeans, and those which bear evident marks of their Roman
origin, or, at least, of Roman taste in their architecture. All that
can be said, without a very exact classification of the different styles,
is that the more rude and simple are the most ancient, and that
the decorations of later monuments were copied from the prevailing
architecture of the time in other countries, with which the in-
habitants had intercourse ; thus there are some which are more
chaste and Grecian in character, some with a half Egyptian outline,
others in a degraded Roman taste, which tells of the decline of art;
but so far as I could observe, there is no characteristic difference in