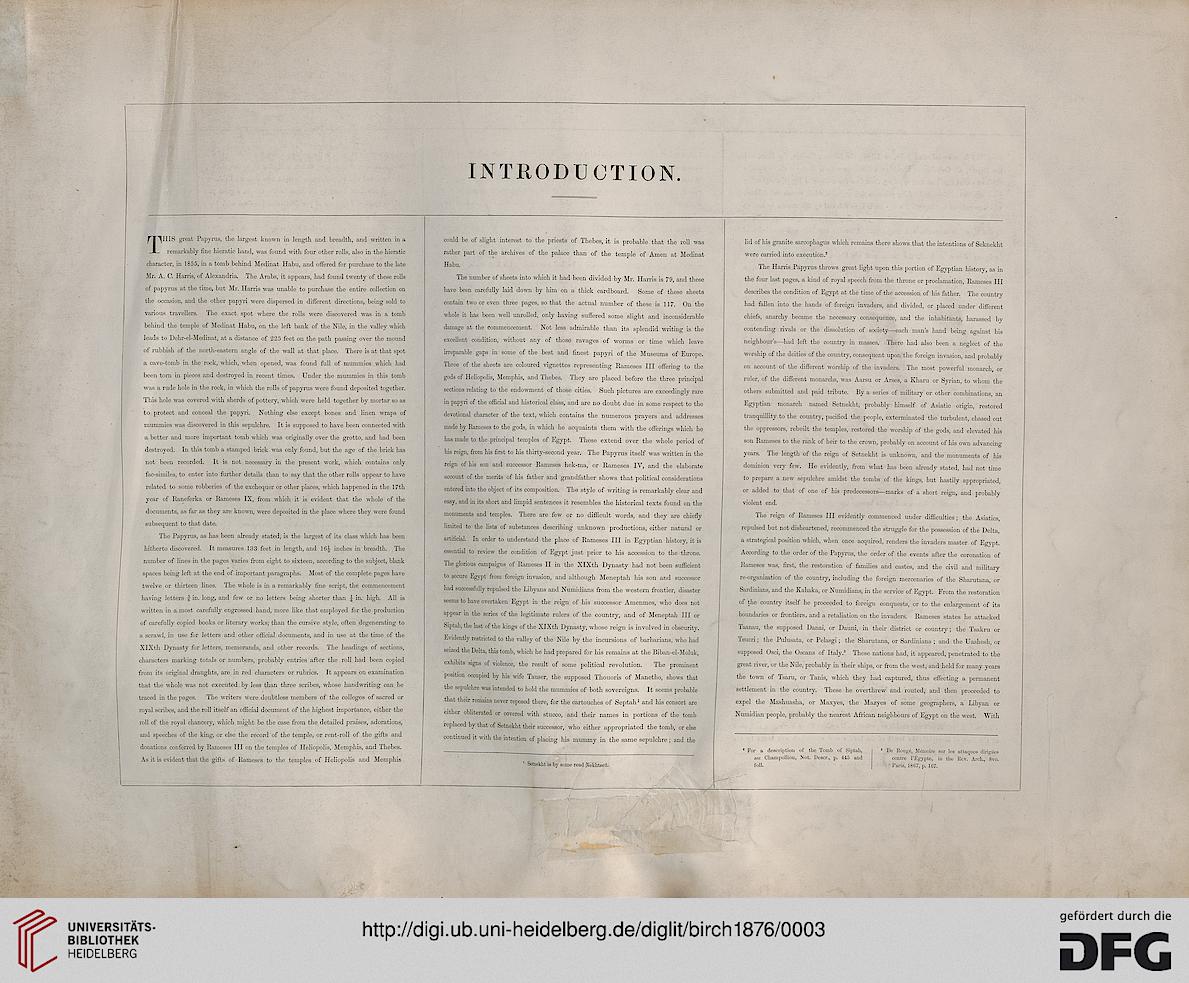 THIS great Papyrus, the largest known in length and breadth, and written in a
remarkably fine hieratic hand, was found with four other rolls, also in the hieratic
character, in 1855, in a tomb behind Medinat Habu, and offered for purchase to the late
Mr. A. C. Harris, of Alexandria. The Arabs, it appears, had found twenty of these rolls
of papyrus at the time, but Mr. Harris was unable to purchase the entire collection on
the occasion, and the other papyri were dispersed in different directions, being sold to
various travellers. The exact spot where the rolls were discovered was in a tomb
behind the temple of Medinat Habu, on the left bank of the Nile, in the valley which
leads to Dehr-el-Medinat, at a distance of 225 feet on the path passing over the mound
of rubbish of the north-eastern angle of the wall at that place. There is at that spot
a cave-tomb in the rock, which, when opened, was found full of mummies which had
been torn in pieces and destroyed in recent times. Under the mummies in this tomb
was a rude hole in the rock, in which the rolls of papyrus were found deposited together.
This hole was covered with sherds of pottery, which were held together by mortar so as
to protect and conceal the papyri. Nothing else except bones and linen wraps of
mummies was discovered in this sepulchre. It is supposed to have been connected with
a better and more important tomb which was originally over the grotto, and had been
destroyed. In this tomb a stamped brick was only found, but the age of the brick has
not been recorded. It is not necessary in the present work, which contains only
fac-similes, to enter into further details than to say that the other rolls appear to have
related to some robberies of the exchequer or other places, which happened in the 17th
year of Eaneferka or Rameses IX, from which it is evident that the whole of the
documents, as far as they are known, were deposited in the place where they were found
subsequent to that date.

The Papyrus, as has been already stated, is the largest of its class which has been
hitherto discovered. It measures 133 feet in length, and 16| inches in breadth. The
number of lines in the pages varies from eight to sixteen, according to the subject, blank
spaces being left at the end of important paragraphs. Most of the complete pages have
twelve or thirteen lines. The whole is in a remarkably fine script, the commencement
having letters f in. long, and few or no letters being shorter than ^ in. high. All is
written in a most carefully engrossed hand, more like that employed for the production
of carefully copied books or literary works; than the cursive style, often degenerating to
a scrawl, in use for letters and other official documents, and in use at the time of the
XlXth Dynasty for letters, memoranda, and other records. The headings of sections,
characters marking totals or numbers, probably entries after the roll had been copied
from its original draughts, are in red characters or rubrics. It appears on examination
that the whole was not executed by less than three scribes, whose handwriting can be
traced in the pages. The writers were doubtless members of the colleges of sacred or
royal scribes, and the roll itself an official document of the highest importance, either the
roll of the royal chancery, which might be the case from the detailed praises, adorations,
and speeches of the king, or else the record of the temple, or rent-roll of the gifts and
donations conferred by Rameses III on the temples of Heliopolis, Memphis, and Thebes.
As it is evident that the gifts of Rameses to the temples of Heliopolis and Memphis

could be of slight interest to the priests of Thebes, it is probable that the roll was
rather part of the archives of the palace than of the temple of Amen at Medinat
Habu.

The number of sheets into which it had been divided by Mr. Harris is 79, and these
have been carefully laid down by him on a thick cardboard. Some of these sheets
contain two or even three pages, so that the actual number of these is 117. On the
whole it has been well unrolled, only having suffered some slight and inconsiderable
damage at the commencement. Not less admirable than its splendid writing is the
excellent condition, without any of those ravages of worms or time which leave
irreparable gaps in some of the best and finest papyri of the Museums of Europe.
Three of the sheets are coloured vignettes representing Rameses III offering to the
gods of Heliopolis, Memphis, and Thebes. They are placed before the three principal
sections relating to the endowment of those cities. Such pictures are exceedingly rare
in papyri of the official and historical class, and are no doubt due in some respect to the
devotional character of the text, which contains the numerous prayers and addresses
made by Rameses to the gods, in which he acquaints them with the offerings which he
has made to the principal temples of Egypt. These extend over the whole period of
his reign, from his first to his thirty-second year. The Papyrus itself was written in the
reign of his son and successor Rameses hek-ma, or Rameses IV, and the elaborate
account of the merits of his father and grandfather shows that political considerations
entered into the object of its composition. The style of writing is remarkably clear and
easy, and in its short and limpid sentences it resembles the historical texts found on the
monuments and temples. There are few or no difficult words, and they are chiefly
limited to the lists of substances describing unknown productions, either natural or
artificial. In order to understand the place of Rameses III in Egyptian history, it is
essential to review the condition of Egypt just prior to his accession to the throne.
The glorious campaigns of Rameses II in the XIXth Dynasty had not been sufficient
to secure Egypt from foreign invasion, and although Meneptah his son and successor
had successfully repulsed the Libyans and Numidians from the western frontier, disaster
seems to have overtaken Egypt in the reign of his successor Amenmes, who does not
appear in the series of the legitimate rulers of the country, and of Meneptah III or
Siptah, the last of the kings of the XlXth Dynasty, whose reign is involved in obscurity.
Evidently restricted to the valley of the Nile by the incursions of barbarians, who had
seized the Delta, this tomb, which he had prepared for his remains at the Biban-el-Moluk,
exhibits signs of violence, the result of some political revolution. The prominent
position occupied by his wife Tauser, the supposed Thouoris of Manetho, shows that
the sepulchre was intended to hold the mummies of both sovereigns. It seems probable
that their remains never reposed there, for the cartouches of Septah1 and his consort are
either obliterated or covered with stucco, and their names in portions of the tomb
replaced by that of Setnekht their successor, who either appropriated the tomb, or else
continued it with the intention of placing his mummy in the same sepulchre ; and the

lid of his granite sarcophagus which remains there shows that the intentions of Seknekht
were carried into execution.2

The Harris Papyrus throws great light upon this portion of Egyptian history, as in
the four last pages, a kind of royal speech from the throne or proclamation, Rameses III
describes the condition of Egypt at the time of the accession of his father. The country
had fallen into the hands of foreign invaders, and divided, or placed under different
chiefs, anarchy became the necessary consequence, and the inhabitants, harassed by
contending rivals or the dissolution of society—each man's hand being against his
neighbour's—had left the country in masses. There had also been a neglect of the
worship of the deities of the country, consequent upon the foreign invasion, and probably
on account of the different worship of the invaders. The most powerful monarch, or
ruler, of the different monarchs, was Aarsu or Arses, a Kharu or Syrian, to whom the
others submitted and paid tribute. By a series of military or other combinations, an
Egyptian monarch named Setnekht, probably himself of Asiatic origin, restored
tranquillity to the country, pacified the people, exterminated the turbulent, chased out
the oppressors, rebuilt the temples, restored the worship of the gods, and elevated his
son Rameses to the rank of heir to the crown, probably on account of his own advancing
years. The length of the reign of Setnekht is unknown, and the monuments of his
dominion very few. He evidently, from what has been already stated, had not time
to prepare a new sepulchre amidst the tombs of the kings, but hastily appropriated,
or added to that of one of his predecessors—marks of a short reign, and probably
violent end.

The reign of Rameses III evidently commenced under difficulties ; the Asiatics,

repulsed but not disheartened, recommenced the struggle for the possession of the Delta,

a strategical position which, when once acquired, renders the invaders master of Egypt.

Rameses was, first, the restoration of families and castes, and the civil and military

re-organization of the country, including the foreign mercenaries of the Sharutana, or

Sardinians, and the Kahaka, or Numidians, in the service of Egypt. From the restoration

of the country itself he proceeded to foreign conquests, or to the enlargement of its

boundaries or frontiers, and a retaliation on the invaders. Rameses states he attacked

supposed Osci, the Oscans of Italy.3 These nations had, it appeared, penetrated to the

great river, or the Nile, probably in their ships, or from the west, and held for many years

the town of Tsaru, or Tanis, which they had captured, thus effecting a permanent

settlement in the country. These he overthrew and routed, and then proceeded to

Numidian people, probably the nearest African neighbours of Egypt on the west. With

For a description of the Tomb of Siptah,
see Charnpollion, Not. Descr., p. 445 and
foil.