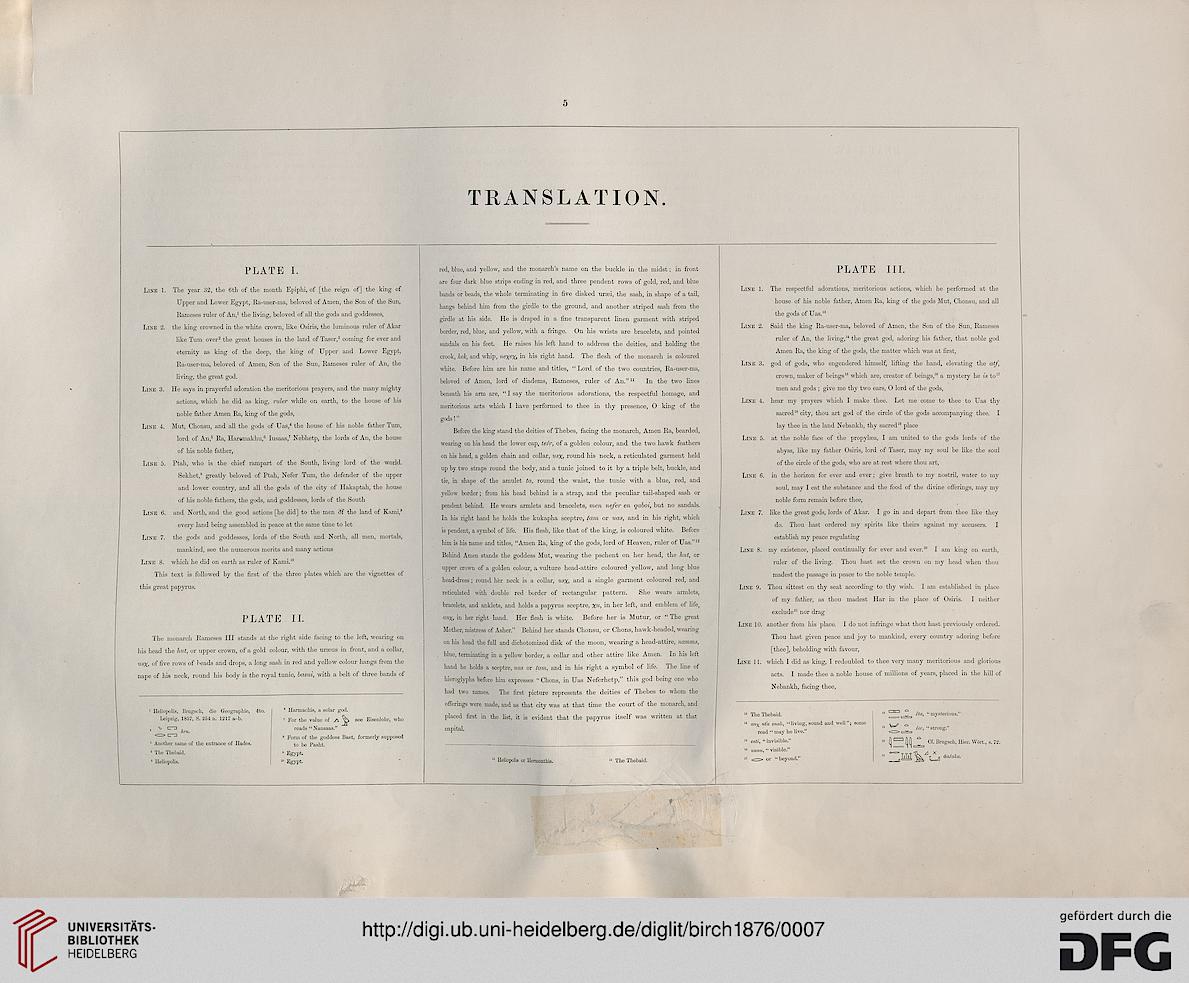 Line 1. The year 32, the 6th of the month Epiphi, of [the reign of] the king of
Upper and Lower Egypt, Ra-user-ma, beloved of Amen, the Son of the Sun,
Rameses ruler of An,1 the living, beloved of all the gods and goddesses,

Line 2. the king crowned in the white crown, like Osiris, the luminous ruler of Akar
like Turn over2 the great houses in the land of Taser,3 coming for ever and
eternity as king of the deep, the king of Upper and Lower Egypt,
Ra-user-ma, beloved of Amen, Son of the Sun, Rameses ruler of An, the
living, the great god.

Line 3. He says in prayerful adoration the meritorious prayers, and the many mighty
actions, which he did as king, ruler while on earth, to the house of his
noble father Amen Ra, king of the gods,

Line 5. Ptah, who is the chief rampart of the South, living lord of the world.
Sekhet,8 greatly beloved of Ptah, Nef er Tum, the defender of the upper
and lower country, and all the gods of the city of Hakaptah, the house
of his noble fathers, the gods, and goddesses, lords of the South

Line 6. and North, and the good actions [he did] to the men of the land of Kami,9
every land being assembled in peace at the same time to let

Line 7. the gods and goddesses, lords of the South and North, all men, mortals,

mankind, see the numerous merits and many actions
Line 8. which he did on earth as ruler of Kami.10

This text is followed by the first of the three plates which are the vignettes of
this great papyrus.

The monarch Rameses III stands at the right side facing to the left, wearing on
his head the hut, or upper crown, of a gold colour, with the urasus in front, and a collar,
usx, of five rows of beads and drops, a long sash in red and yellow colour hangs from the
nape of his neck, round his body is the royal tunic, hasui, with a belt of three bands of

3 Another name of the entrance of Hades.
1 The Thebaid.
6 Heliopolis.

red, blue, and yellow, and the monarch's name on the buckle in the midst ; in front
are four dark blue strips ending in red, and three pendent rows of gold, red, and blue
bands or beads, the whole terminating in five disked ursei, the sash, in shape of a tail,
hangs behind him from the girdle to the ground, and another striped sash from the
girdle at his side. He is draped in a fine transparent linen garment with striped
border, red, blue, and yellow, with a fringe. On his wrists are bracelets, and pointed
sandals on his feet. He raises his left hand to address the deities, and holding the
crook, hek, and whip, ηβχβχ, in his right hand. The flesh of the monarch is coloured
white. Before him are his name and titles, " Lord of the two countries, Ra-user-ma,
beloved of Amen, lord of diadems, Rameses, ruler of An."u In the two lines
beneath his arm are, " I say the meritorious adorations, the respectful homage, and
meritorious acts which I have performed to thee in thy presence, Ο king of the
gods !"

Before the king stand the deities of Thebes, facing the monarch, Amen Ra, bearded,

wearing on his head the lower cap, tes'r, of a golden colour, and the two hawk feathers

on his head, a golden chain and collar, usx, round his neck, a reticulated garment held

up by two straps round the body, and a tunic joined to it by a triple belt, buckle, and

tie, in shape of the amulet ta, round the waist, the tunic with a blue, red, and

yellow border ; from his head behind is a strap, and the peculiar tail-shaped sash or

pendent behind. He wears armlets and bracelets, men nef er en qaboi, but no sandals.

In his right hand he holds the kukapha sceptre, tarn or uas, and in his right, which

is pendent, a symbol of life. His flesh, like that of the king, is coloured white. Before

him is his name and titles, "Amen Ra, king of the gods, lord of Heaven, ruler of Uas."12

Behind Amen stands the goddess Mut, wearing the pschent on her head, the hut, or

head-dress ; round her neck is a collar, usx, and a single garment coloured red, and

bracelets, and anklets, and holds a papyrus sceptre, xu, in her left, and emblem of life,

αηχ, in her right hand. Her flesh is white. Before her is Mutur, or " The great

Mother, mistress of Asher." Behind her stands Chonsu, or Chons, hawk-headed, wearing

on his head the full and dichotomized disk of the moon, wearing a head-attire, namms,

blue, terminating in a yellow border, a collar and other attire like Amen. In his left

hand he holds a sceptre, uas or tarn, and in his right a symbol of life. The fine of

hieroglyphs before him expresses " Chons, in Uas Neferhetp," this god being one who

had two names. The first picture represents the deities of Thebes to whom the

offerings were made, and as that city was at that time the court of the monarch, and

placed first in the list, it is evident that the papyrus itself was written at that

Line 1. The respectful adorations, meritorious actions, which he performed at the
house of his noble father, Amen Ra, king of the gods Mut, Chonsu, and all
the gods of Uas.18
Line 2. Said the king Ra-user-ma, beloved of Amen, the Son of the Sun, Rameses
ruler of An, the living,14 the great god, adoring his father, that noble god
Amen Ra, the king of the gods, the matter which was at first,
Line 3. god of gods, who engendered himself, lifting the hand, elevating the at/,
crown, maker of beings15 which are, creator of beings,16 a mystery he is to17
men and gods ; give me thy two ears, Ο lord of the gods,
Line 4. hear my prayers which I make thee. Let me come to thee to Uas thy
sacred18 city, thou art god of the circle of the gods accompanying thee. I
lay thee in the land Nebankh, thy sacred19 place
Line 5. at the noble face of the propylsea, I am united to the gods lords of the
abyss, like my father Osiris, lord of Taser, may my soul be like the soul
of the circle of the gods, who are at rest where thou art,
Line 6. in the horizon for ever and ever; give breath to my nostril, water to my
soul, may I eat the substance and the food of the divine offerings, may my
noble form remain before thee,
Line 7. like the great gods, lords of Akar. I go in and depart from thee like they
do. Thou hast ordered my spirits like theirs against my accusers. I
establish my peace regulating
Line 8. my existence, placed continually for ever and ever.-0 I am king on earth,
ruler of the living. Thou hast set the crown on my head when thou
madest the passage in peace to the noble temple.
Line 9. Thou sittest on thy seat according to thy wish. I am established in place
of my father, as thou madest Har in the place of Osiris. I neither
exclude21 nor drag
Line 10. another from his place. I do not infringe what thou hast previously ordered.
Thou hast given peace and joy to mankind, every country adoring before
[thee], beholding with favour,
Line 11. which I did as king, I redoubled to thee very many meritorious and glorious
acts. I made thee a noble house of millions of years, placed in the hill of
Nebankh, facing thee,