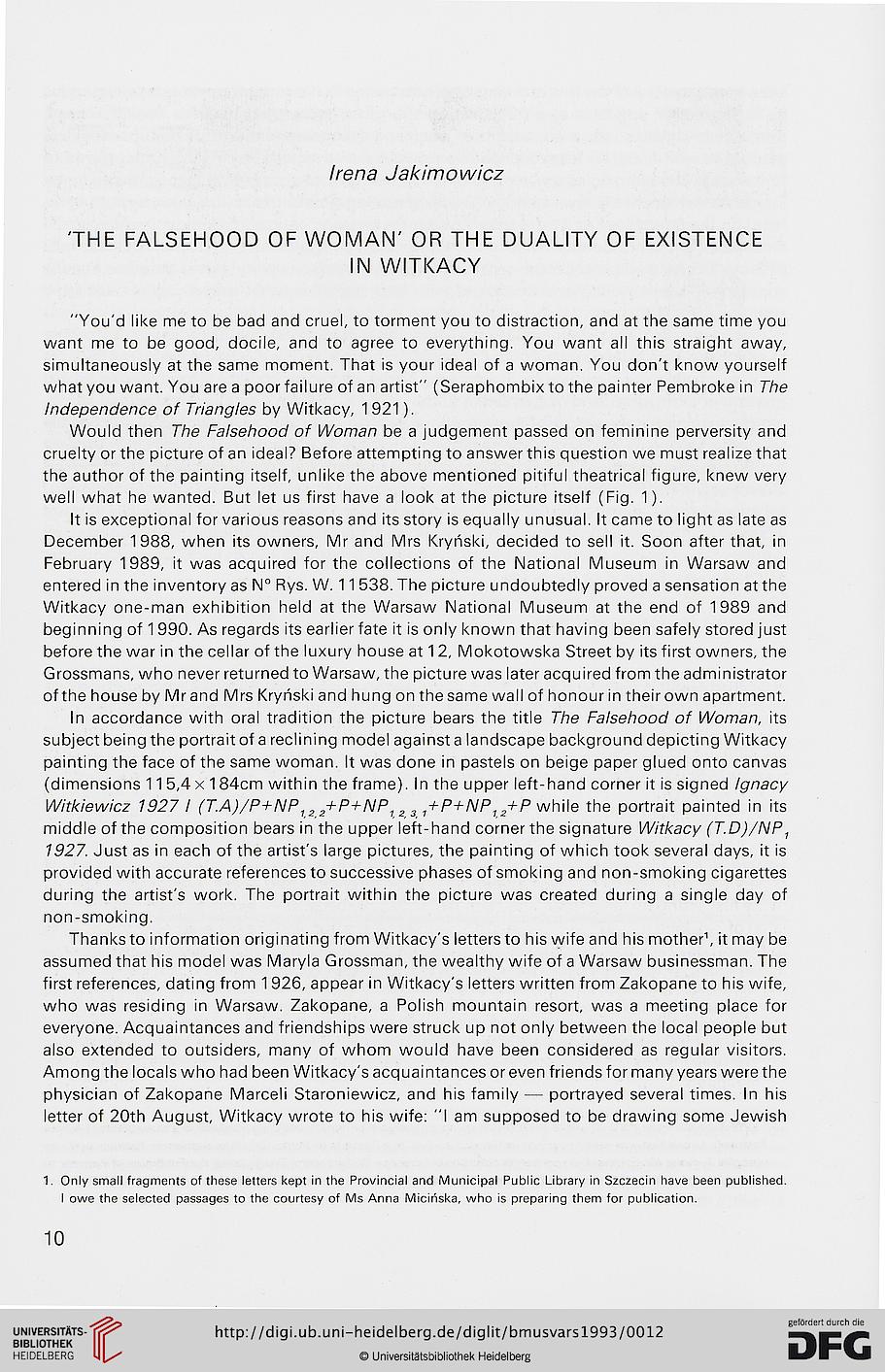 THE FALSEHOOD OF WOMAN' OR THE DUALITY OF EXISTENCE

"You'd like me to be bad and cruel, to torment you to distraction, and at the same time you
want me to be good, docile, and to agree to everything. You want all this straight away,
simultaneously at the same moment. That is your ideał of a woman. You don't know yourself
what you want. You are a poor failure of an artist" (Seraphombix to the painter Pembroke in The
Independence of Triangles by Witkacy, 1 921).

Would then The Falsehood of Woman be a judgement passed on feminine perversity and
cruelty or the picture of an ideał? Before attempting to answer this question we must realize that
the author of the painting itself, unlike the above mentioned pitiful theatrical figurę, knew very
well what he wanted. But let us first have a look at the picture itself (Fig. 1).

It is exceptional for various reasons and its story is equally unusual. It came to light as late as
December 1988, when its owners, Mr and Mrs Kryński, decided to sell it. Soon after that, in
February 1989, it was acquired for the collections of the National Museum in Warsaw and
entered in the inventory as N° Rys. W. 11 538. The picture undoubtedly proved a sensation at the
Witkacy one-man exhibition held at the Warsaw National Museum at the end of 1989 and
beginning of 1 990. As regards its earlier fate it is only known that having been safely stored just
before the war in the cellar of the luxury house at 1 2, Mokotowska Street by its first owners, the
Grossmans, who never returned to Warsaw, the picture was later acquired from the administrator
of the house by Mr and Mrs Kryński andhungonthesame wali ofhonourintheir own apartment.

In accordance with oral tradition the picture bears the title The Falsehood of Woman, its
subject being the portrait of a reclining model against a landscape background depicting Witkacy
painting the face of the same woman. It was done in pastels on beige paper glued onto canvas
(dimensions 11 5,4 x 1 84cm within the frame). In the upper left-hand corner it is signed Ignacy
Witkiewicz 1927 I (T.A)/P+NP122+P+NP123 ,+P+NP^+P while the portrait painted in its
middle of the composition bears in the upper left-hand corner the signature Witkacy (T.D)/NP1
1927. Just as in each of the artisfs large pictures, the painting of which took several days, it is
provided with accurate references to successive phases of smoking and non-smoking cigarettes
during the artist's work. The portrait within the picture was created during a single day of
non-smoking.

Thanks to information originating from Witkacy's letters to his wife and his mother1, it may be
assumed that his model was Maryla Grossman, the wealthy wife of a Warsaw businessman. The
first references, dating from 1 926, appear in Witkacy's letters written from Zakopane to his wife,
who was residing in Warsaw. Zakopane, a Polish mountain resort, was a meeting place for
everyone. Acquaintances and friendships were struck up not only between the local people but
also extended to outsiders, many of whom would have been considered as regular visitors.
Among the locals who had been Witkacy's acquaintances or even friends for many years were the
physician of Zakopane Marceli Staroniewicz, and his family — portrayed several times. In his
letter of 20th August, Witkacy wrote to his wife: "I am supposed to be drawing some Jewish

1. Only smali fragments of these letters kept in the Provincial and Municipal Public Library in Szczecin have been published.
I owe the selected passages to the courtesy of Ms Anna Micińska, who is preparing them for publication.