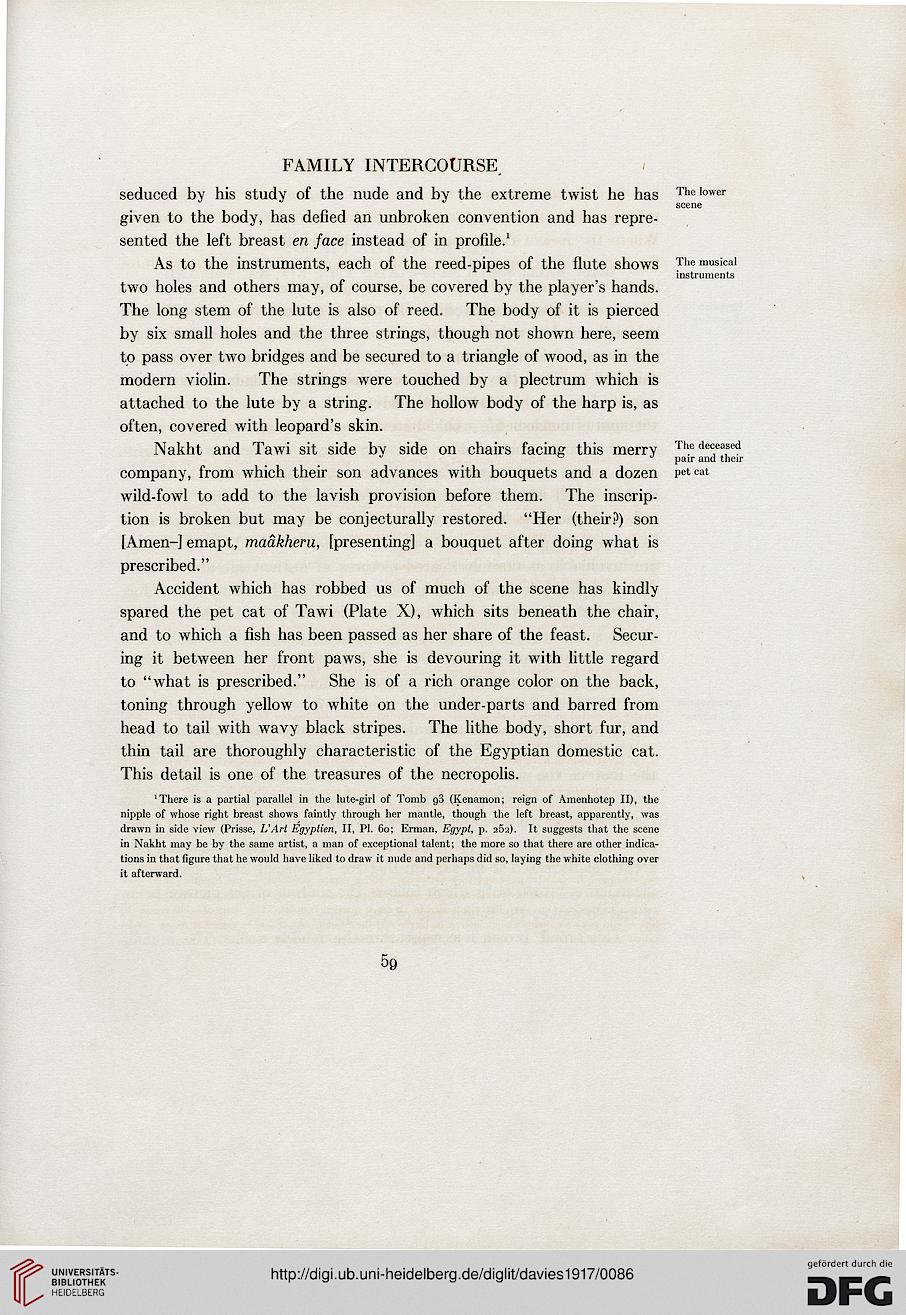 seduced by his study of the nude and by the extreme twist he has
given to the body, has defied an unbroken convention and has repre-
sented the left breast en face instead of in profile.1

As to the instruments, each of the reed-pipes of the flute shows
two holes and others may, of course, be covered by the player's hands.
The long stem of the lute is also of reed. The body of it is pierced
by six small holes and the three strings, though not shown here, seem
to pass over two bridges and be secured to a triangle of wood, as in the
modern violin. The strings were touched by a plectrum which is
attached to the lute by a string. The hollow body of the harp is, as
often, covered with leopard's skin.

Nakht and Tawi sit side by side on chairs facing this merry
company, from which their son advances with bouquets and a dozen
wild-fowl to add to the lavish provision before them. The inscrip-
tion is broken but may be conjecturally restored. "Her (theirP) son
[Amen-] emapt, maakheru, [presenting] a bouquet after doing what is
prescribed."

Accident which has robbed us of much of the scene has kindly
spared the pet cat of Tawi (Plate X), which sits beneath the chair,
and to which a fish has been passed as her share of the feast. Secur-
ing it between her front paws, she is devouring it with little regard
to "what is prescribed." She is of a rich orange color on the back,
toning through yellow to white on the under-parts and barred from
head to tail with wavy black stripes. The lithe body, short fur, and
thin tail are thoroughly characteristic of the Egyptian domestic cat.
This detail is one of the treasures of the necropolis.

1 There is a partial parallel in the lute-girl of Tomb q3 (Kenamon; reign of Amenhotep II), the
nipple of whose right breast shows faintly through her mantle, though the left breast, apparently, was
drawn in side view (Prisse, L'Art Egyptien, II, PI. 60; Erman, Egypt, p. 25a). It suggests that the scene
in Nakht may be by the same artist, a man of exceptional talent; the more so that there are other indica-
tions in that figure that he would have liked to draw it nude and perhaps did so, laying the white clothing over
it afterward.

The deceased
pair and their
pet cat