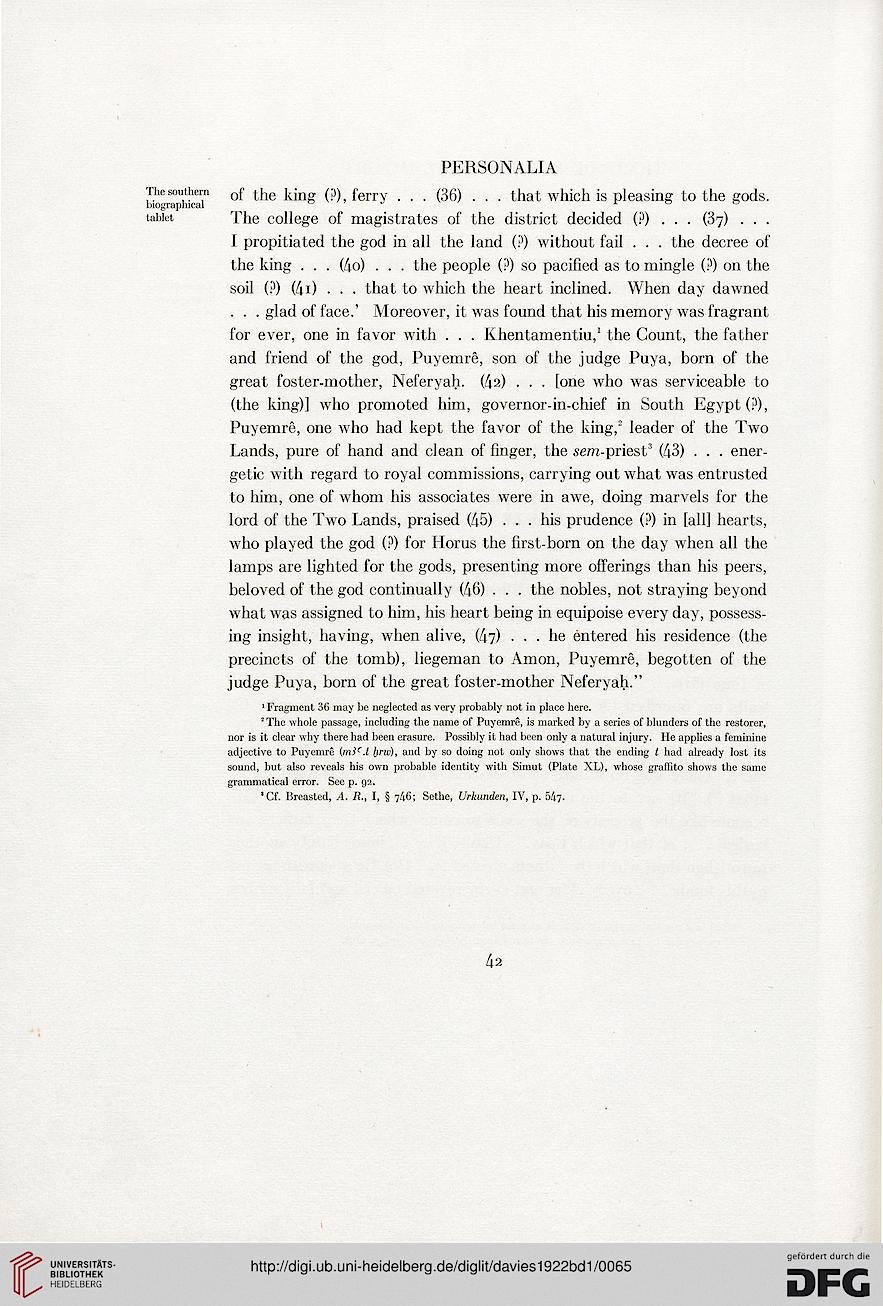 I propitiated the god in all the land (P) without fail . . . the decree of
the king . . . (4o) . . . the people (?) so pacified as to mingle (?) on the
soil (P) (4i) . . . that to which the heart inclined. When day dawned
. . . glad of face.' Moreover, it was found that his memory was fragrant
for ever, one in favor with . . . Khentamentiu,1 the Count, the father
and friend of the god, Puyemre, son of the judge Puya, born of the
great foster-mother, Neferyah. (42) . . . [one who was serviceable to
(the king)] who promoted him, governor-in-chief in South Egypt (P),
Puyemre, one who had kept the favor of the king,2 leader of the Two
Lands, pure of hand and clean of finger, the sem-priest3 (43) . . . ener-
getic with regard to royal commissions, carrying out what was entrusted
to him, one of whom his associates were in awe, doing marvels for the
lord of the Two Lands, praised (45) . . . his prudence (?) in [all] hearts,
who played the god (?) for Horus the first-born on the day when all the
lamps are lighted for the gods, presenting more offerings than his peers,
beloved of the god continually (46) . . . the nobles, not straying beyond
what was assigned to him, his heart being in equipoise every day, possess-
ing insight, having, when alive, (47) ... he entered his residence (the
precincts of the tomb), liegeman to Anion, Puyemre, begotten of the
judge Puya, born of the great foster-mother Neferyah."

fragment 36 may be neglected as very probably not in place here.

2 The whole passage, including the name of Puyemre, is marked by a series of blunders of the restorer,
nor is it clear why there had been erasure. Possibly it had been only a natural injury. He applies a feminine
adjective to Puyemre {m$c.1 !}rw), and by so doing not only shows that the ending t had already lost its
sound, but also reveals his own probable identity with Simut (Plate XL), whose graffito shows the same
grammatical error. See p. 92.