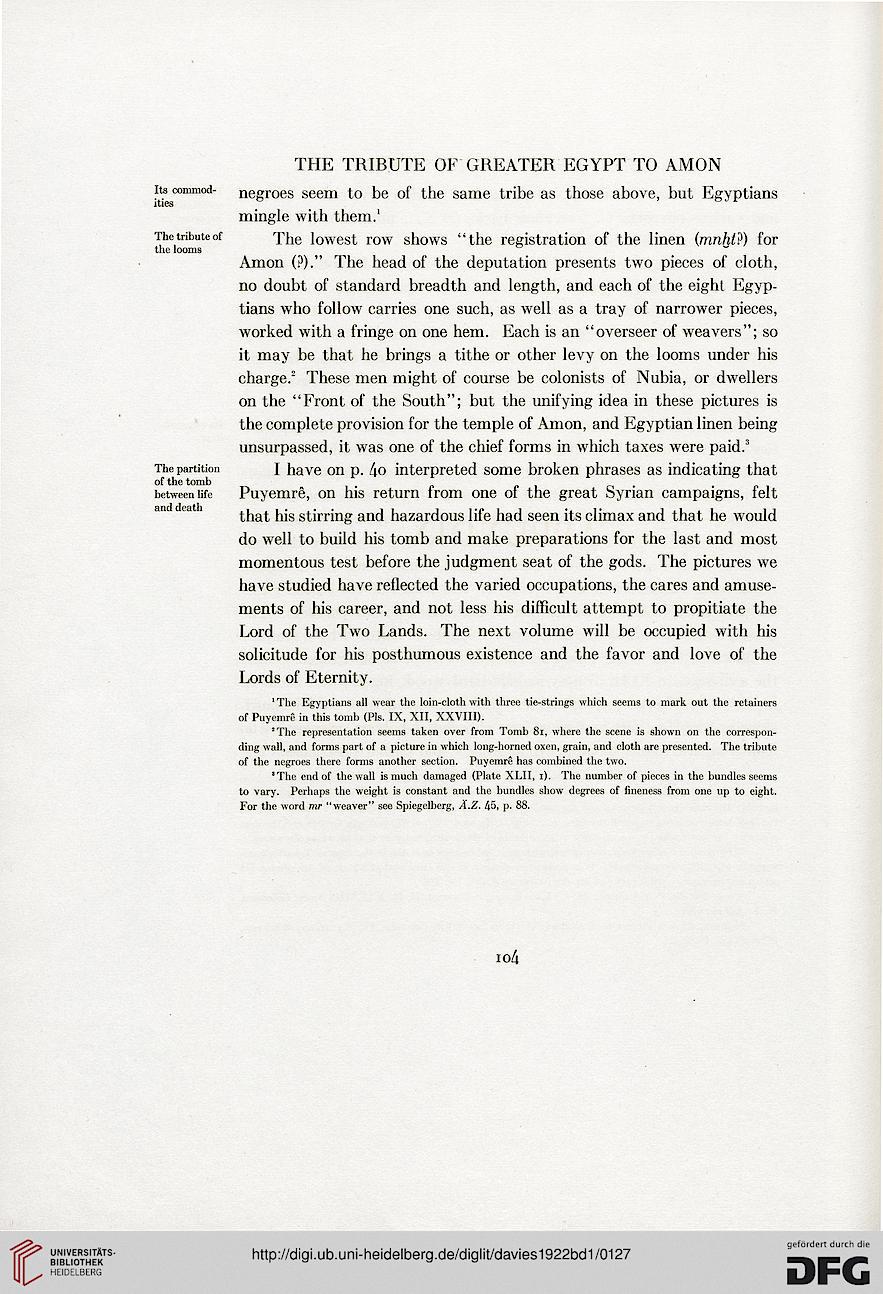 The tribute of
the looms

The partition
of the tomb
between life
and death

THE TRIBUTE OF GREATER EGYPT TO AMON

negroes seem to be of the same tribe as those above, but Egyptians
mingle with them.1

The lowest row shows "the registration of the linen (mnht?) for
Amon (?)." The head of the deputation presents two pieces of cloth,
no doubt of standard breadth and length, and each of the eight Egyp-
tians who follow carries one such, as well as a tray of narrower pieces,
worked with a fringe on one hem. Each is an "overseer of weavers"; so
it may be that he brings a tithe or other levy on the looms under his
charge.2 These men might of course be colonists of Nubia, or dwellers
on the "Front of the South"; but the unifying idea in these pictures is
the complete provision for the temple of Anion, and Egyptian linen being
unsurpassed, it was one of the chief forms in which taxes were paid.3

I have on p. /io interpreted some broken phrases as indicating that
Puyemre, on his return from one of the great Syrian campaigns, felt
that his stirring and hazardous life had seen its climax and that he would
do well to build his tomb and make preparations for the last and most
momentous test before the judgment seat of the gods. The pictures we
have studied have reflected the varied occupations, the cares and amuse-
ments of his career, and not less his difficult attempt to propitiate the
Lord of the Two Lands. The next volume will be occupied with his
solicitude for his posthumous existence and the favor and love of the
Lords of Eternity.

1 The Egyptians all wear the loin-cloth with three tie-strings which seems to mark out the retainers
of Puyemre in this tomb (Pis. IX, XII, XXVIII).

2 The representation seems taken over from Tomb 81, where the scene is shown on the correspon-
ding wall, and forms part of a picture in which long-horned oxen, grain, and cloth are presented. The tribute
of the negroes there forms another section. Puyemre has combined the two.

3 The end of the wall is much damaged (Plate XLII, i). The number of pieces in the bundles seems
to vary. Perhaps the weight is constant and the bundles show degrees of fineness from one up to eight.
For the word mr "weaver" see Spiegelberg, A.Z. 45, p. 88.