Evans, Arthur
The ‘Tomb of the Double Axes’ and associated group, and the pillar rooms and ritual vessels of the ‘Little Palace’ at Knossos’ — London, 1914 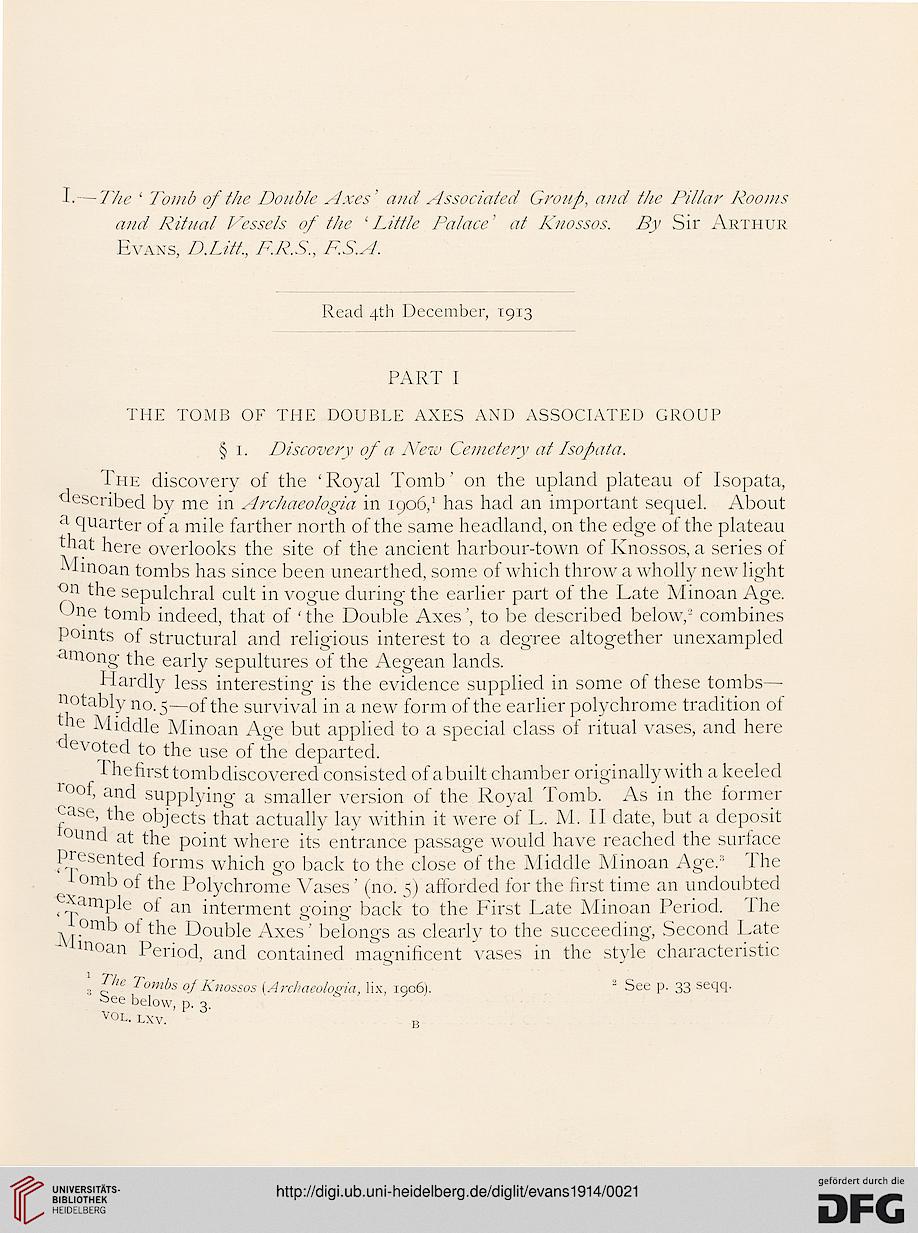 Information about OCR text
I. — 7 he 1 Tomb of the Double Axes' and Associated Group, and the Pillar Rooms
and Ritual Vessels of the 'Little Palace' at Knossos. By Sir Arthur
Evans, D.Litt., P.R.S., F.S.A.

THE TOMB OF THE DOUBLE AXES AND ASSOCIATED GROUP
§ I. Discovery of a New Cemetery at Isopata.

The discovery of the 'Royal Tomb' on the upland plateau of Isopata,
described by me in Archaeologia in 1906,1 has had an important sequel. About
a quarter of a mile farther north of the same headland, on the edge of the plateau
that here overlooks the site of the ancient harbour-town of Knossos, a series of
^■linoan tombs has since been unearthed, some of which throw a wholly new light
on the sepulchral cult in vogue during the earlier part of the Late Minoan Age.
^ne tomb indeed, that of ' the Double Axes', to be described below,- combines
points of structural and religious interest to a degree altogether unexampled
■among the early sepultures of the Aegean lands.

Hardly less interesting is the evidence supplied in some of these tombs—
notably no. 5—of the survival in a new form of the earlier polychrome tradition of
he Middle Minoan Age but applied to a special class of ritual vases, and here
devoted to the use of the departed.

1 nerirst tomb discovered consisted of abuilt chamber originally with a keeled
10of, and supplying a smaller version of the Royal Tomb. As in the former
case, the objects that actually lay within it were of L. M. II date, but a deposit
°und at the point where its entrance passage would have reached the surface
Presented forms which go back to the close of the Middle Minoan Age. '' The
omb of the Polychrome Vases' (no. 5) afforded for the first time an undoubted
example of an interment going back to the First Late Minoan Period. The
fyr-° °f the Double Axes ' belongs as clearly to the succeeding, Second Late
moan Period, and contained magnificent vases in the style characteristic