Evans, Arthur
The earlier religion of Greece in the light of Cretan discoveries — London, 1931 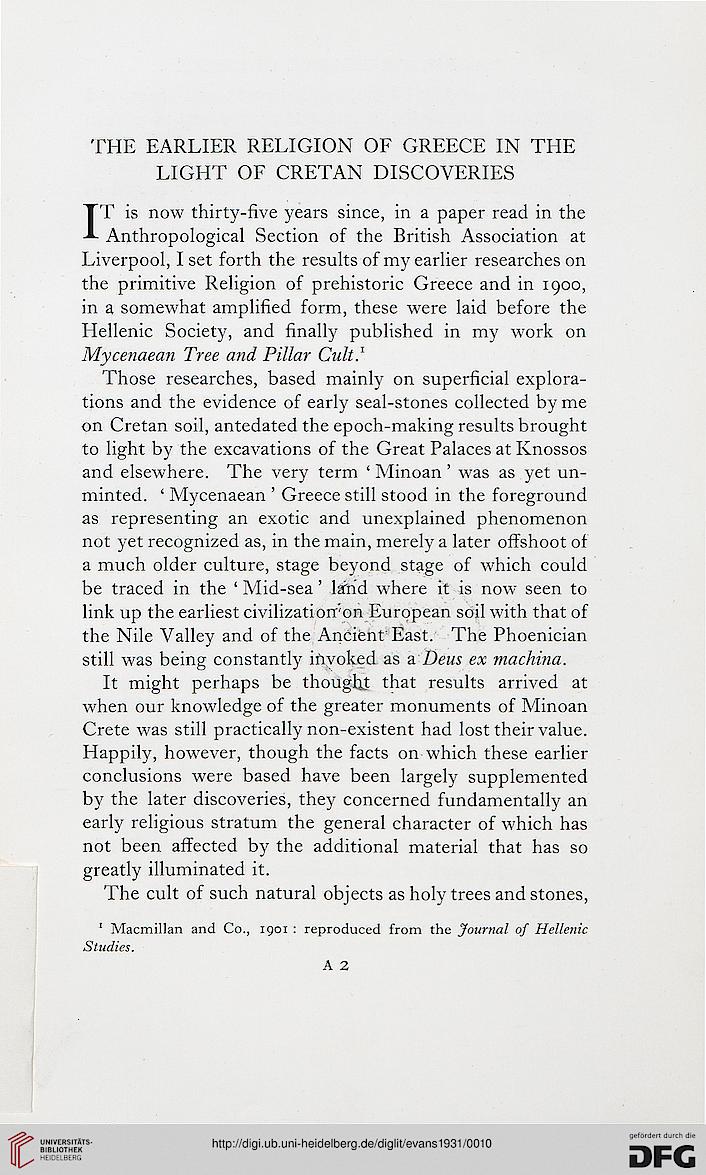 IT is now thirty-five years since, in a paper read in the
Anthropological Section of the British Association at
Liverpool, I set forth the results of my earlier researches on
the primitive Religion of prehistoric Greece and in 1900,
in a somewhat amplified form, these were laid before the
Hellenic Society, and finally published in my work on
Mycenaean Tree and Pillar Cult.1

Those researches, based mainly on superficial explora-
tions and the evidence of early seal-stones collected by me
on Cretan soil, antedated the epoch-making results brought
to light by the excavations of the Great Palaces at Knossos
and elsewhere. The very term ' Minoan' was as yet un-
minted. ' Mycenaean ' Greece still stood in the foreground
as representing an exotic and unexplained phenomenon
not yet recognized as, in the main, merely a later offshoot of
a much older culture, stage beyond stage of which could
be traced in the ' Mid-sea' larrid where it is now seen to
link up the earliest civilization'on European soil with that of
the Nile Valley and of the Ancient East. The Phoenician
still was being constantly invoked as a Deus ex machina.

It might perhaps be thought that results arrived at
when our knowledge of the greater monuments of Minoan
Crete was still practically non-existent had lost their value.
Happily, however, though the facts on which these earlier
conclusions were based have been largely supplemented
by the later discoveries, they concerned fundamentally an
early religious stratum the general character of which has
not been affected by the additional material that has so
greatly illuminated it.

The cult of such natural objects as holy trees and stones,

1 Macmillan and Co., 1901 : reproduced from the Journal of Hellenic
Studies.