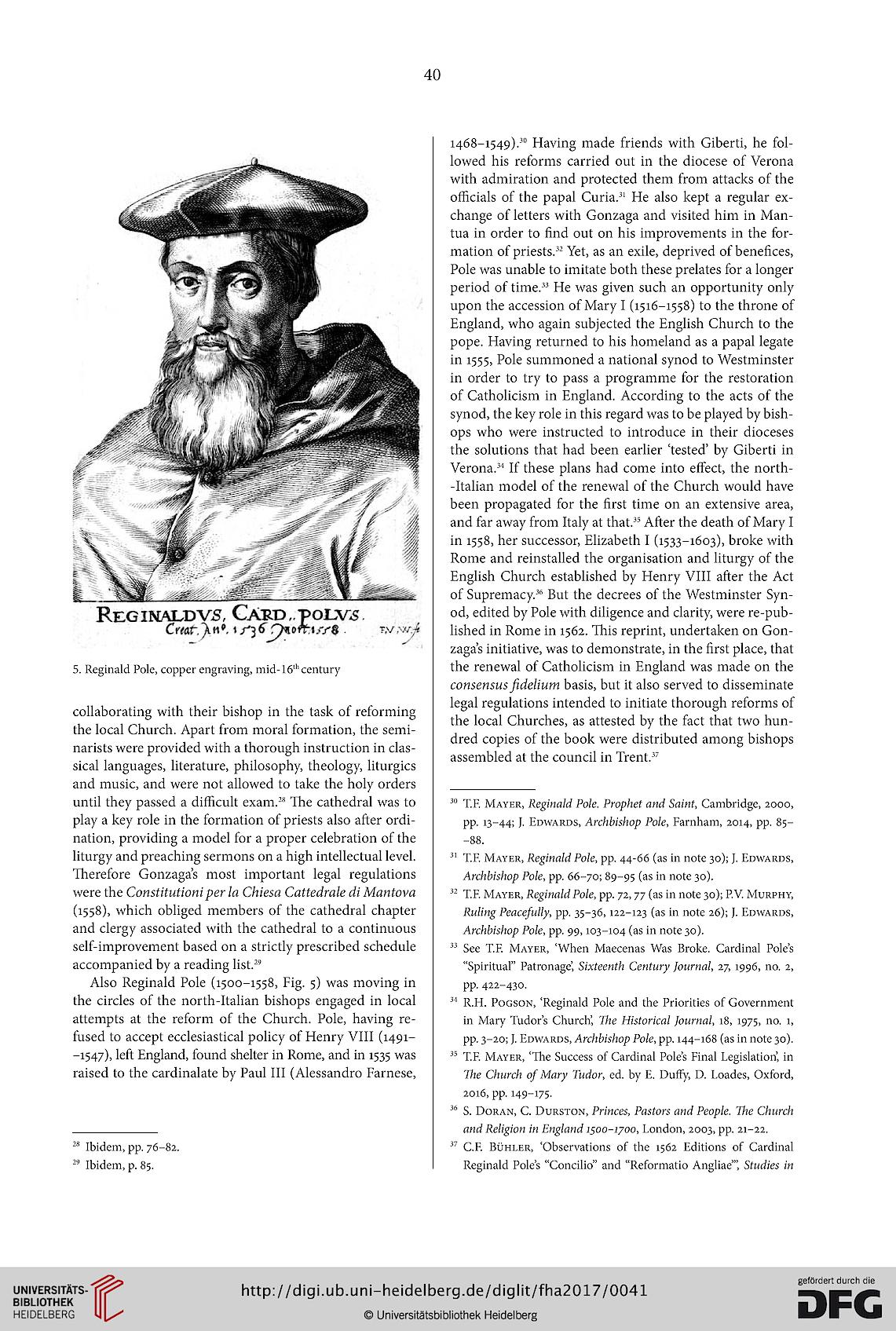 5. Reginald Pole, copper engraving, mid-16th century
collaborating with their bishop in the task of reforming
the local Church. Apart from moral formation, the semi-
narists were provided with a thorough instruction in clas-
sical languages, literature, philosophy, theology, liturgies
and music, and were not allowed to take the holy orders
until they passed a difficult exam.28 The cathedral was to
play a key role in the formation of priests also after ordi-
nation, providing a model for a proper celebration of the
liturgy and preaching sermons on a high intellectual level.
Therefore Gonzagas most important legal regulations
were the Constitutioni per la Chiesa Cattedrale di Mantova
(1558), which obliged members of the cathedral chapter
and clergy associated with the cathedral to a continuous
self-improvement based on a strictly prescribed schedule
accompanied by a reading list.29
Also Reginald Pole (1500-1558, Fig. 5) was moving in
the circles of the north-Italian bishops engaged in local
attempts at the reform of the Church. Pole, having re-
fused to accept ecclesiastical policy of Henry VIII (1491-
-1547), left England, found shelter in Rome, and in 1535 was
raised to the cardinalate by Paul III (Alessandro Farnese,

1468-1549).30 Having made friends with Giberti, he fol-
lowed his reforms carried out in the diocese of Verona
with admiration and protected them from attacks of the
officials of the papal Curia.31 He also kept a regular ex-
change of letters with Gonzaga and visited him in Man-
tua in order to find out on his improvements in the for-
mation of priests.32 Yet, as an exile, deprived of benefices,
Pole was unable to imitate both these prelates for a longer
period of time.33 He was given such an opportunity only
upon the accession of Mary I (1516-1558) to the throne of
England, who again subjected the English Church to the
pope. Having returned to his homeland as a papal legate
in 1555, Pole summoned a national synod to Westminster
in order to try to pass a programme for the restoration
of Catholicism in England. According to the acts of the
synod, the key role in this regard was to be played by bish-
ops who were instructed to introduce in their dioceses
the solutions that had been earlier ‘tested’ by Giberti in
Verona.34 If these plans had come into effect, the north-
- Italian model of the renewal of the Church would have
been propagated for the first time on an extensive area,
and far away from Italy at that.35 After the death of Mary I
in 1558, her successor, Elizabeth I (1533-1603), broke with
Rome and reinstalled the organisation and liturgy of the
English Church established by Henry VIII after the Act
of Supremacy.36 But the decrees of the Westminster Syn-
od, edited by Pole with diligence and clarity, were re-pub-
lished in Rome in 1562. This reprint, undertaken on Gon-
zagas initiative, was to demonstrate, in the first place, that
the renewal of Catholicism in England was made on the
consensus fidelium basis, but it also served to disseminate
legal regulations intended to initiate thorough reforms of
the local Churches, as attested by the fact that two hun-
dred copies of the book were distributed among bishops
assembled at the council in Trent.37