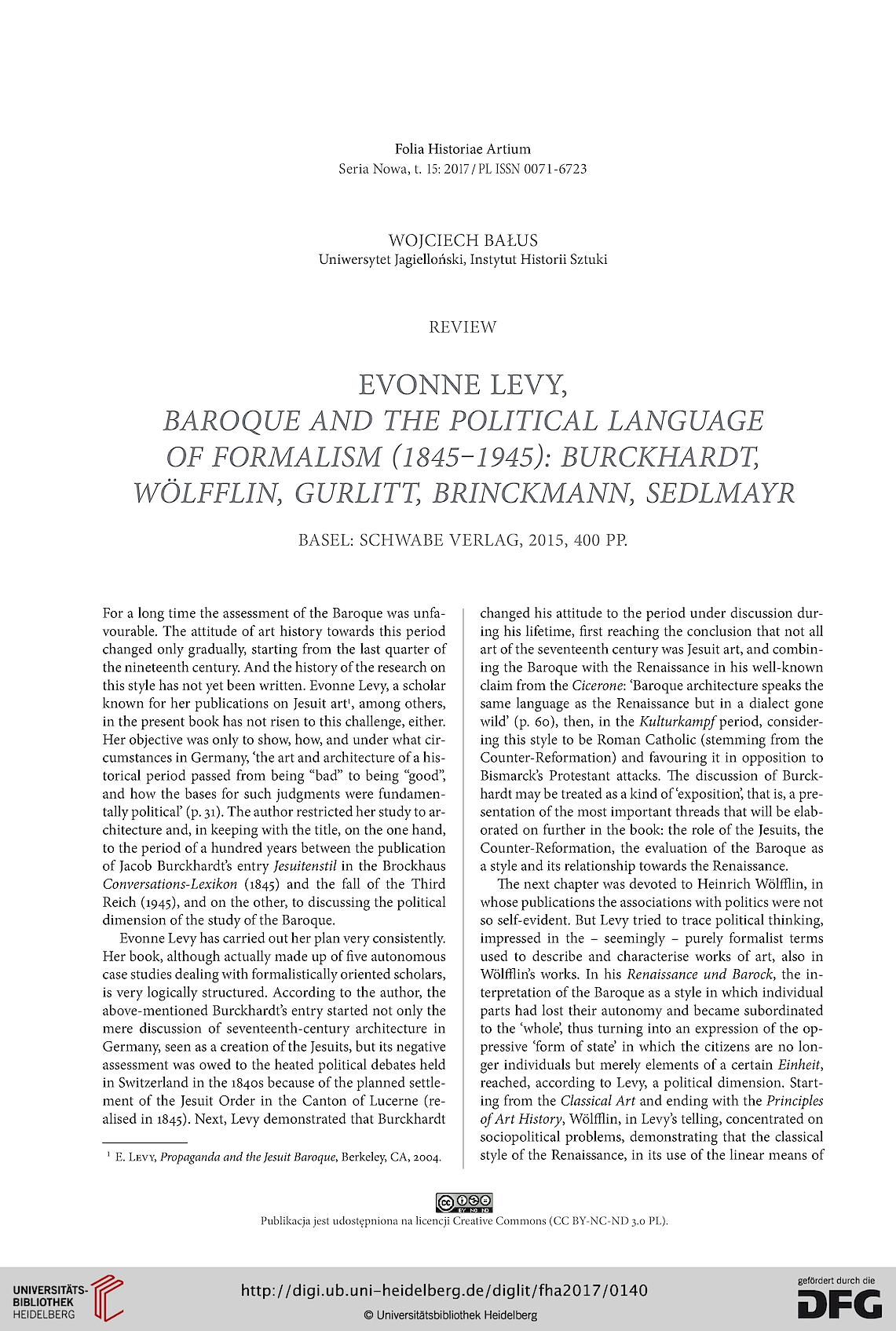 For a long time the assessment of the Baroque was unfa-
vourable. The attitude of art history towards this period
changed only gradually, starting from the last quarter of
the nineteenth century And the history of the research on
this style has not yet been written. Evonne Levy, a scholar
known for her publications on Jesuit art1, among others,
in the present book has not risen to this challenge, either.
Her objective was only to show, how, and under what cir-
cumstances in Germany, ‘the art and architecture of a his-
torical period passed from being “bad” to being “good”,
and how the bases for such judgments were fundamen-
tally political’ (p. 31). The author restricted her study to ar-
chitecture and, in keeping with the title, on the one hand,
to the period of a hundred years between the publication
of Jacob Burckhardts entry Jesuitenstil in the Brockhaus
Conversations-Lexikon (1845) and the fall of the Third
Reich (1945), and on the other, to discussing the political
dimension of the study of the Baroque.
Evonne Levy has carried out her plan very consistently.
Her book, although actually made up of five autonomous
case studies dealing with formalistically oriented scholars,
is very logically structured. According to the author, the
above-mentioned Burckhardts entry started not only the
mere discussion of seventeenth-century architecture in
Germany, seen as a creation of the Jesuits, but its negative
assessment was owed to the heated political debates held
in Switzerland in the 1840s because of the planned settle-
ment of the Jesuit Order in the Canton of Lucerne (re-
alised in 1845). Next, Levy demonstrated that Burckhardt

changed his attitude to the period under discussion dur-
ing his lifetime, first reaching the conclusion that not all
art of the seventeenth century was Jesuit art, and combin-
ing the Baroque with the Renaissance in his well-known
claim from the Cicerone: ‘Baroque architecture speaks the
same language as the Renaissance but in a dialect gone
wild’ (p. 60), then, in the Kulturkampf period, consider-
ing this style to be Roman Catholic (stemming from the
Counter-Reformation) and favouring it in opposition to
Bismarck’s Protestant attacks. The discussion of Burck-
hardt maybe treated as a kind of‘exposition, that is, a pre-
sentation of the most important threads that will be elab-
orated on further in the book: the role of the Jesuits, the
Counter-Reformation, the evaluation of the Baroque as
a style and its relationship towards the Renaissance.
The next chapter was devoted to Heinrich Wölfflin, in
whose publications the associations with politics were not
so self-evident. But Levy tried to trace political thinking,
impressed in the - seemingly - purely formalist terms
used to describe and characterise works of art, also in
Wolfflin’s works. In his Renaissance und Barock, the in-
terpretation of the Baroque as a style in which individual
parts had lost their autonomy and became subordinated
to the ‘whole’, thus turning into an expression of the op-
pressive ‘form of state’ in which the citizens are no lon-
ger individuals but merely elements of a certain Einheit,
reached, according to Levy, a political dimension. Start-
ing from the Classical Art and ending with the Principles
of Art History, Wölfflin, in Levy’s telling, concentrated on
sociopolitical problems, demonstrating that the classical
style of the Renaissance, in its use of the linear means of