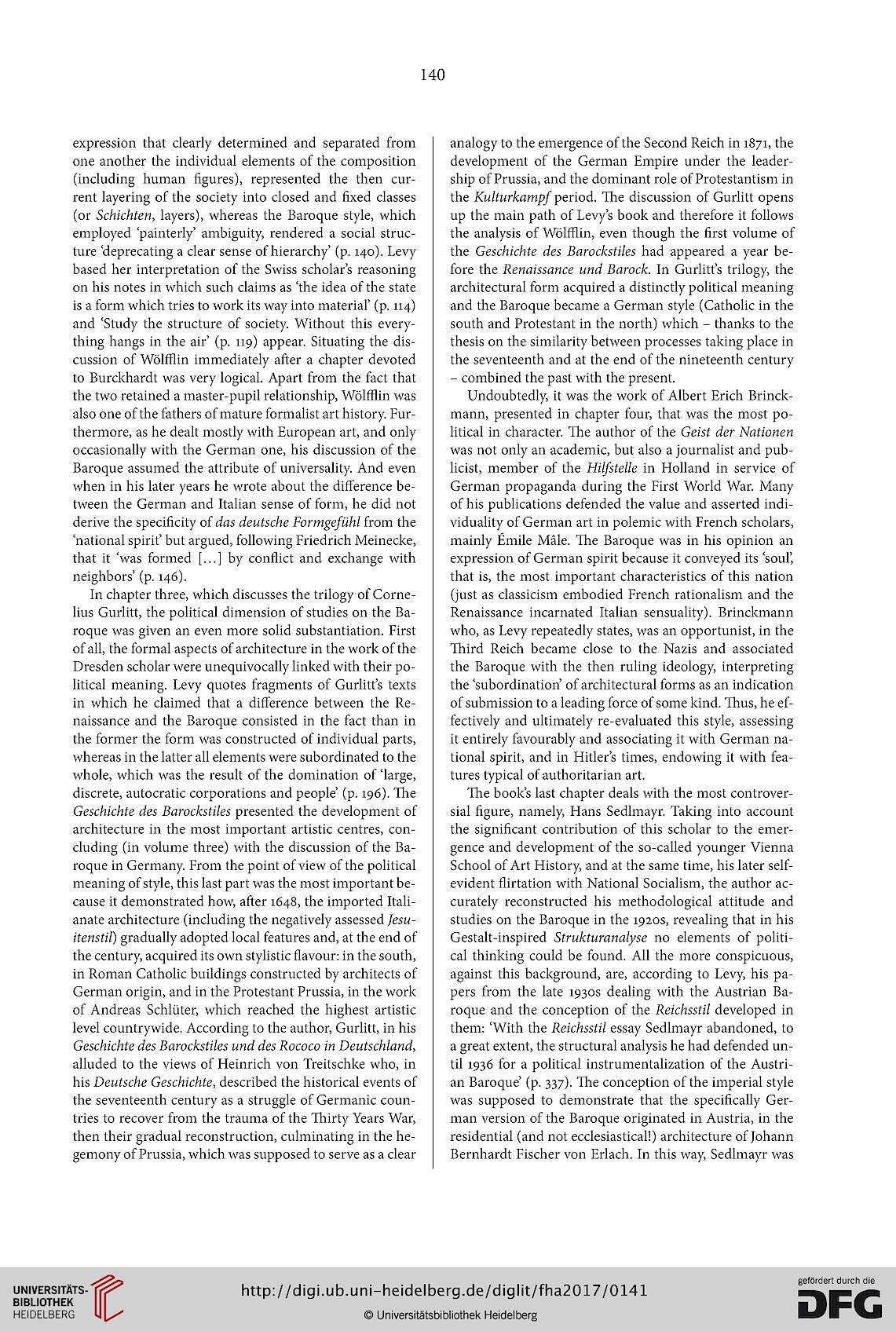 expression that clearly determined and separated from
one another the individual elements of the composition
(including human figures), represented the then cur-
rent layering of the society into closed and fixed classes
(or Schichten, layers), whereas the Baroque style, which
employed ‘painterly ambiguity, rendered a social struc-
ture ‘deprecating a clear sense of hierarchy (p. 140). Levy
based her interpretation of the Swiss scholars reasoning
on his notes in which such claims as ‘the idea of the state
is a form which tries to work its way into material’ (p. 114)
and ‘Study the structure of society Without this every-
thing hangs in the air’ (p. 119) appear. Situating the dis-
cussion of Wolfflin immediately after a chapter devoted
to Burckhardt was very logical. Apart from the fact that
the two retained a master-pupil relationship, Wölfflin was
also one of the fathers of mature formalist art history. Fur-
thermore, as he dealt mostly with European art, and only
occasionally with the German one, his discussion of the
Baroque assumed the attribute of universality. And even
when in his later years he wrote about the difference be-
tween the German and Italian sense of form, he did not
derive the specificity of das deutsche Formgefühl from the
‘national spirit’ but argued, following Friedrich Meinecke,
that it ‘was formed [...] by conflict and exchange with
neighbors’ (p. 146).
In chapter three, which discusses the trilogy of Corne-
lius Gurlitt, the political dimension of studies on the Ba-
roque was given an even more solid substantiation. First
of all, the formal aspects of architecture in the work of the
Dresden scholar were unequivocally linked with their po-
litical meaning. Levy quotes fragments of Gurlitt’s texts
in which he claimed that a difference between the Re-
naissance and the Baroque consisted in the fact than in
the former the form was constructed of individual parts,
whereas in the latter all elements were subordinated to the
whole, which was the result of the domination of ‘large,
discrete, autocratic corporations and people’ (p. 196). The
Geschichte des Barockstiles presented the development of
architecture in the most important artistic centres, con-
cluding (in volume three) with the discussion of the Ba-
roque in Germany. From the point of view of the political
meaning of style, this last part was the most important be-
cause it demonstrated how, after 1648, the imported Itali-
anate architecture (including the negatively assessed Jesu-
itenstil) gradually adopted local features and, at the end of
the century, acquired its own stylistic flavour: in the south,
in Roman Catholic buildings constructed by architects of
German origin, and in the Protestant Prussia, in the work
of Andreas Schlüter, which reached the highest artistic
level countrywide. According to the author, Gurlitt, in his
Geschichte des Barockstiles und des Rococo in Deutschland,
alluded to the views of Heinrich von Treitschke who, in
his Deutsche Geschichte, described the historical events of
the seventeenth century as a struggle of Germanic coun-
tries to recover from the trauma of the Thirty Years War,
then their gradual reconstruction, culminating in the he-
gemony of Prussia, which was supposed to serve as a clear

analogy to the emergence of the Second Reich in 1871, the
development of the German Empire under the leader-
ship of Prussia, and the dominant role of Protestantism in
the Kulturkampf period. The discussion of Gurlitt opens
up the main path of Levy’s book and therefore it follows
the analysis of Wolfflin, even though the first volume of
the Geschichte des Barockstiles had appeared a year be-
fore the Renaissance und Barock. In Gurlitt’s trilogy, the
architectural form acquired a distinctly political meaning
and the Baroque became a German style (Catholic in the
south and Protestant in the north) which - thanks to the
thesis on the similarity between processes taking place in
the seventeenth and at the end of the nineteenth century
- combined the past with the present.
Undoubtedly, it was the work of Albert Erich Brinck-
mann, presented in chapter four, that was the most po-
litical in character. The author of the Geist der Nationen
was not only an academic, but also a journalist and pub-
licist, member of the Hilfsteile in Holland in service of
German propaganda during the First World War. Many
of his publications defended the value and asserted indi-
viduality of German art in polemic with French scholars,
mainly Émile Mâle. The Baroque was in his opinion an
expression of German spirit because it conveyed its ‘soul’,
that is, the most important characteristics of this nation
(just as classicism embodied French rationalism and the
Renaissance incarnated Italian sensuality). Brinckmann
who, as Levy repeatedly states, was an opportunist, in the
Third Reich became close to the Nazis and associated
the Baroque with the then ruling ideology, interpreting
the ‘subordination of architectural forms as an indication
of submission to a leading force of some kind. Thus, he ef-
fectively and ultimately re-evaluated this style, assessing
it entirely favourably and associating it with German na-
tional spirit, and in Hitler’s times, endowing it with fea-
tures typical of authoritarian art.
The book’s last chapter deals with the most controver-
sial figure, namely, Hans Sedlmayr. Taking into account
the significant contribution of this scholar to the emer-
gence and development of the so-called younger Vienna
School of Art History, and at the same time, his later self-
evident flirtation with National Socialism, the author ac-
curately reconstructed his methodological attitude and
studies on the Baroque in the 1920s, revealing that in his
Gestalt-inspired Strukturanalyse no elements of politi-
cal thinking could be found. All the more conspicuous,
against this background, are, according to Levy, his pa-
pers from the late 1930s dealing with the Austrian Ba-
roque and the conception of the Reichsstil developed in
them: ‘With the Reichsstil essay Sedlmayr abandoned, to
a great extent, the structural analysis he had defended un-
til 1936 for a political instrumentalization of the Austri-
an Baroque’ (p. 337). The conception of the imperial style
was supposed to demonstrate that the specifically Ger-
man version of the Baroque originated in Austria, in the
residential (and not ecclesiastical!) architecture of Johann
Bernhardt Fischer von Erlach. In this way, Sedlmayr was