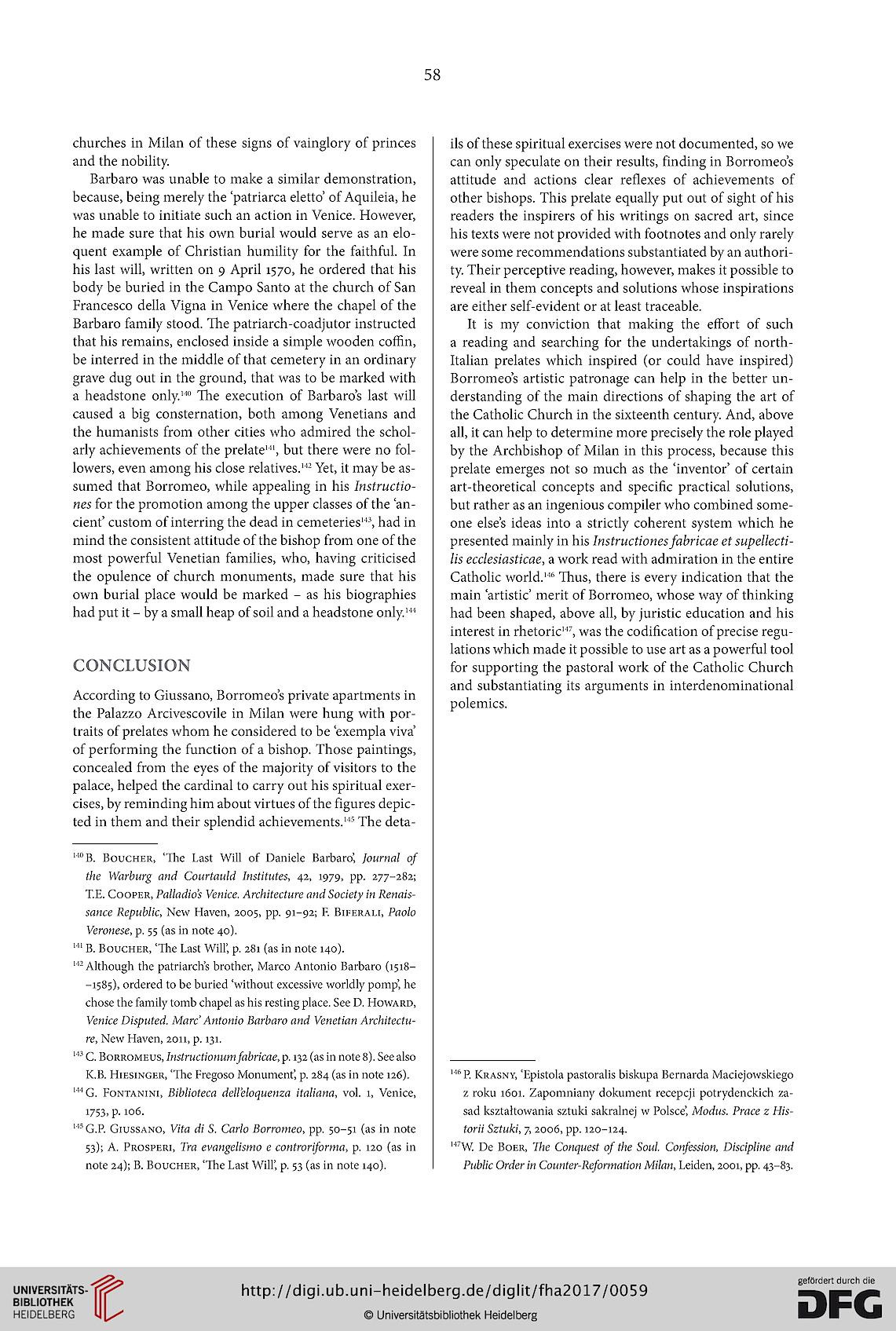 churches in Milan of these signs of vainglory of princes
and the nobility
Barbaro was unable to make a similar demonstration,
because, being merely the ‘patriarca eletto’ of Aquileia, he
was unable to initiate such an action in Venice. However,
he made sure that his own burial would serve as an elo-
quent example of Christian humility for the faithful. In
his last will, written on 9 April 1570, he ordered that his
body be buried in the Campo Santo at the church of San
Francesco della Vigna in Venice where the chapel of the
Barbaro family stood. The patriarch-coadjutor instructed
that his remains, enclosed inside a simple wooden coffin,
be interred in the middle of that cemetery in an ordinary
grave dug out in the ground, that was to be marked with
a headstone only.140 The execution of Barbaros last will
caused a big consternation, both among Venetians and
the humanists from other cities who admired the schol-
arly achievements of the prelate141, but there were no fol-
lowers, even among his close relatives.142 Yet, it maybe as-
sumed that Borromeo, while appealing in his Instructio-
nes for the promotion among the upper classes of the an-
cient’ custom of interring the dead in cemeteries143, had in
mind the consistent attitude of the bishop from one of the
most powerful Venetian families, who, having criticised
the opulence of church monuments, made sure that his
own burial place would be marked - as his biographies
had put it - by a small heap of soil and a headstone only.144
CONCLUSION
According to Giussano, Borromeo’s private apartments in
the Palazzo Arcivescovile in Milan were hung with por-
traits of prelates whom he considered to be ‘exempla viva’
of performing the function of a bishop. Those paintings,
concealed from the eyes of the majority of visitors to the
palace, helped the cardinal to carry out his spiritual exer-
cises, by reminding him about virtues of the figures depic-
ted in them and their splendid achievements.145 The deta-
140 B. Boucher, ‘The Last Will of Daniele Barbaro’, Journal of
the Warburg and Courtauld Institutes, 42, 1979, pp. 277-282;
T.E. Cooper, Palladio’s Venice. Architecture and Society in Renais-
sance Republic, New Haven, 2005, pp. 91-92; F. Biferali, Paolo
Veronese, p. 55 (as in note 40).
141B. Boucher, ‘The Last Will’, p. 281 (as in note 140).
142 Although the patriarch’s brother, Marco Antonio Barbaro (1518-
-1585), ordered to be buried ‘without excessive worldly pomp’, he
chose the family tomb chapel as his resting place. See D. Howard,
Venice Disputed. Marc’ Antonio Barbaro and Venetian Architectu-
re, New Haven, 2011, p. 131.
143 C. BORROMEUS, Instructionum fabricae, p. 132 (as in note 8). See also
K.B. Hiesinger, ‘The Fregoso Monument’, p. 284 (as in note 126).
144 G. Fontanini, Biblioteca dell’eloquenza italiana, vol. 1, Venice,
1753, p. 106.
145 G.P. Giussano, Vita di S. Carlo Borromeo, pp. 50-51 (as in note
53); A. Prosperi, Tra evangelismo e Controriforma, p. 120 (as in
note 24); B. Boucher, ‘The Last Will’, p. 53 (as in note 140).

ils of these spiritual exercises were not documented, so we
can only speculate on their results, finding in Borromeo’s
attitude and actions clear reflexes of achievements of
other bishops. This prelate equally put out of sight of his
readers the inspirers of his writings on sacred art, since
his texts were not provided with footnotes and only rarely
were some recommendations substantiated by an authori-
ty. Their perceptive reading, however, makes it possible to
reveal in them concepts and solutions whose inspirations
are either self-evident or at least traceable.
It is my conviction that making the effort of such
a reading and searching for the undertakings of north-
Italian prelates which inspired (or could have inspired)
Borromeo’s artistic patronage can help in the better un-
derstanding of the main directions of shaping the art of
the Catholic Church in the sixteenth century. And, above
all, it can help to determine more precisely the role played
by the Archbishop of Milan in this process, because this
prelate emerges not so much as the ‘inventor’ of certain
art-theoretical concepts and specific practical solutions,
but rather as an ingenious compiler who combined some-
one else’s ideas into a strictly coherent system which he
presented mainly in his Instructiones fabricae et supellecti-
lis ecclesiasticae, a work read with admiration in the entire
Catholic world.146 Thus, there is every indication that the
main ‘artistic’ merit of Borromeo, whose way of thinking
had been shaped, above all, by juristic education and his
interest in rhetoric147, was the codification of precise regu-
lations which made it possible to use art as a powerful tool
for supporting the pastoral work of the Catholic Church
and substantiating its arguments in interdenominational
polemics.