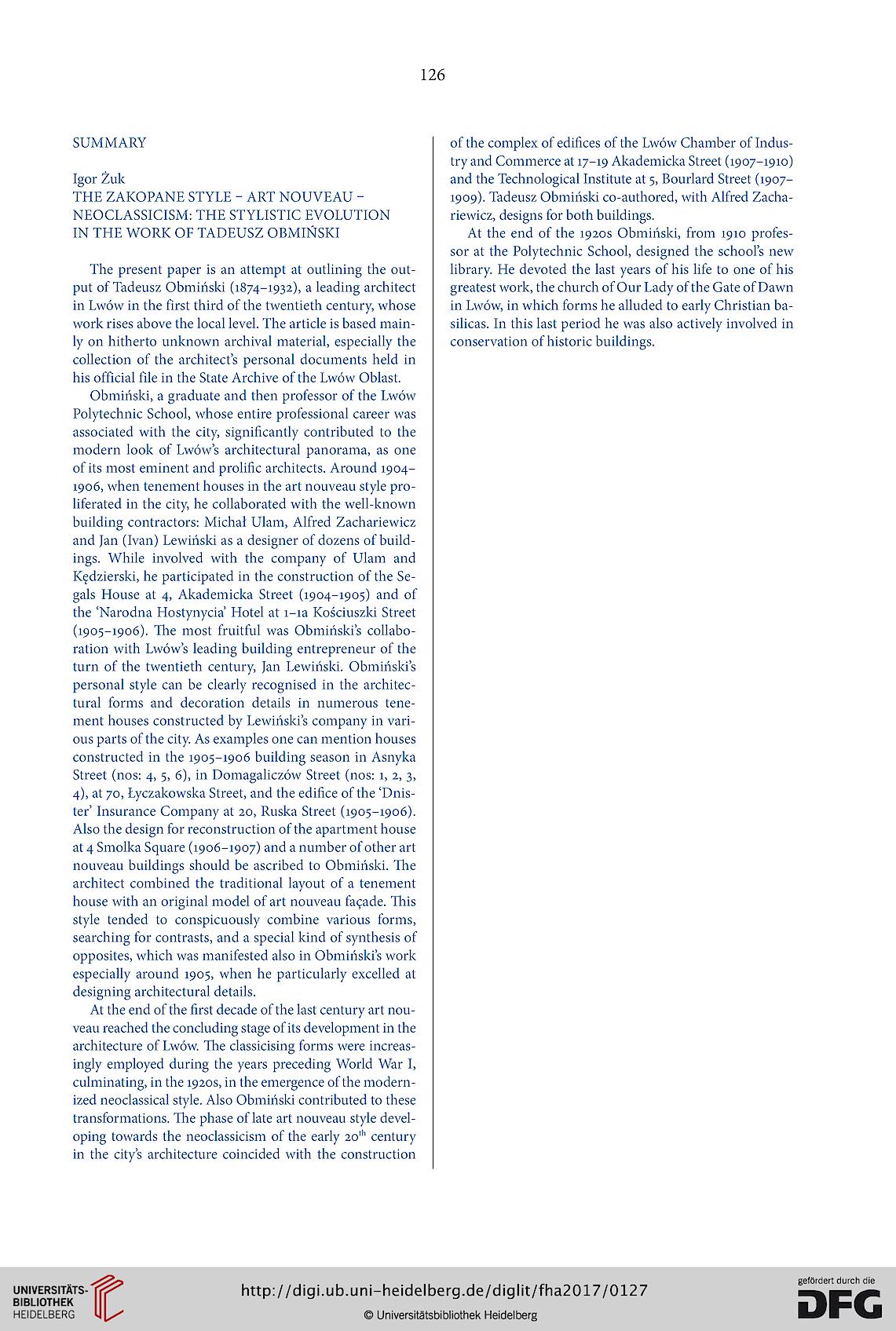 SUMMARY
Igor Żuk
THE ZAKOPANE STYLE - ART NOUVEAU -
NEOCLASSICISM: THE STYLISTIC EVOLUTION
IN THE WORK OF TADEUSZ OBMIŃSKI
The present paper is an attempt at outlining the out-
put of Tadeusz Obmiński (1874-1932), a leading architect
in Lwów in the first third of the twentieth century, whose
work rises above the local level. The article is based main-
ly on hitherto unknown archival material, especially the
collection of the architects personal documents held in
his official file in the State Archive of the Lwów Oblast.
Obmiński, a graduate and then professor of the Lwów
Polytechnic School, whose entire professional career was
associated with the city, significantly contributed to the
modern look of Lwóws architectural panorama, as one
of its most eminent and prolific architects. Around 1904-
1906, when tenement houses in the art nouveau style pro-
liferated in the city, he collaborated with the well-known
building contractors: Michał Ulam, Alfred Zachariewicz
and Jan (Ivan) Lewiński as a designer of dozens of build-
ings. While involved with the company of Ulam and
Kędzierski, he participated in the construction of the Se-
gals House at 4, Akademicka Street (1904-1905) and of
the ‘Narodna Hostynycia’ Hotel at l-ia Kościuszki Street
(1905-1906). The most fruitful was Obmińskis collabo-
ration with Lwóws leading building entrepreneur of the
turn of the twentieth century, Jan Lewiński. Obmińskis
personal style can be clearly recognised in the architec-
tural forms and decoration details in numerous tene-
ment houses constructed by Lewiński s company in vari-
ous parts of the city. As examples one can mention houses
constructed in the 1905-1906 building season in Asnyka
Street (nos: 4, 5, 6), in Domagaliczów Street (nos: 1, 2, 3,
4), at 70, Łyczakowska Street, and the edifice of the ‘Dnis-
ter Insurance Company at 20, Ruska Street (1905-1906).
Also the design for reconstruction of the apartment house
at 4 Smolka Square (1906-1907) and a number of other art
nouveau buildings should be ascribed to Obmiński. The
architect combined the traditional layout of a tenement
house with an original model of art nouveau façade. This
style tended to conspicuously combine various forms,
searching for contrasts, and a special kind of synthesis of
opposites, which was manifested also in Obmińskis work
especially around 1905, when he particularly excelled at
designing architectural details.
At the end of the first decade of the last century art nou-
veau reached the concluding stage of its development in the
architecture of Lwów. The classicising forms were increas-
ingly employed during the years preceding World War I,
culminating, in the 1920s, in the emergence of the modern-
ized neoclassical style. Also Obmiński contributed to these
transformations. The phase of late art nouveau style devel-
oping towards the neoclassicism of the early 20th century
in the city’s architecture coincided with the construction

of the complex of edifices of the Lwów Chamber of Indus-
try and Commerce at 17-19 Akademicka Street (1907-1910)
and the Technological Institute at 5, Bourlard Street (1907-
1909). Tadeusz Obmiński co-authored, with Alfred Zacha-
riewicz, designs for both buildings.
At the end of the 1920s Obmiński, from 1910 profes-
sor at the Polytechnic School, designed the schools new
library. He devoted the last years of his life to one of his
greatest work, the church of Our Lady of the Gate of Dawn
in Lwów, in which forms he alluded to early Christian ba-
silicas. In this last period he was also actively involved in
conservation of historic buildings.