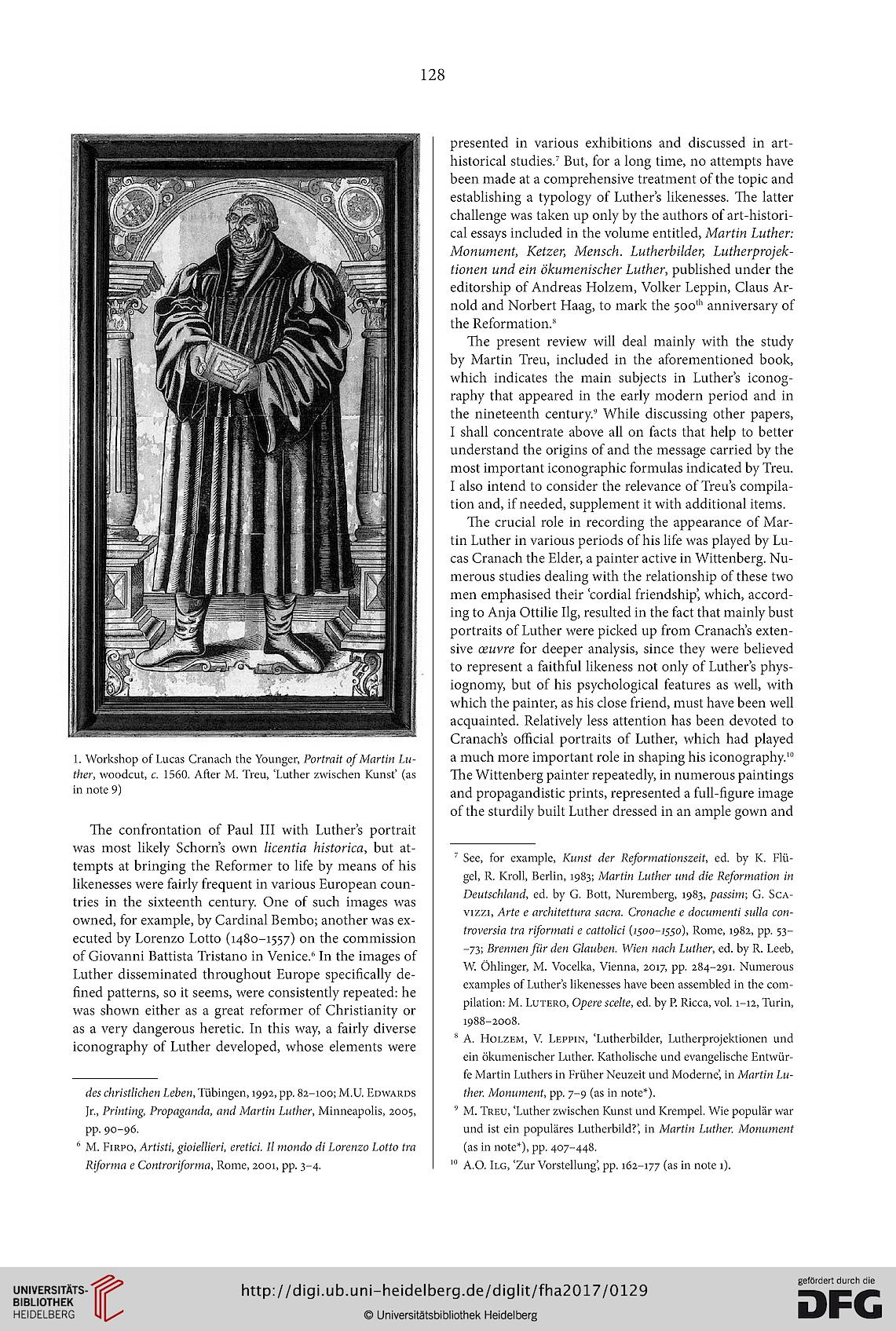 
1. Workshop of Lucas Cranach the Younger, Portrait of Martin Lu-
ther, woodcut, c. 1560. After M. Treu, ‘Luther zwischen Kunst’ (as
in note 9)
The confrontation of Paul III with Luthers portrait
was most likely Schorns own licentia historica, but at-
tempts at bringing the Reformer to life by means of his
likenesses were fairly frequent in various European coun-
tries in the sixteenth century One of such images was
owned, for example, by Cardinal Bembo; another was ex-
ecuted by Lorenzo Lotto (1480-1557) on the commission
of Giovanni Battista Tristano in Venice.* * * 6 In the images of
Luther disseminated throughout Europe specifically de-
fined patterns, so it seems, were consistently repeated: he
was shown either as a great reformer of Christianity or
as a very dangerous heretic. In this way, a fairly diverse
iconography of Luther developed, whose elements were

presented in various exhibitions and discussed in art-
historical studies.7 But, for a long time, no attempts have
been made at a comprehensive treatment of the topic and
establishing a typology of Luthers likenesses. The latter
challenge was taken up only by the authors of art-histori-
cal essays included in the volume entitled, Martin Luther:
Monument, Ketzer, Mensch. Lutherbilder, Lutherprojek-
tionen und ein ökumenischer Luther, published under the
editorship of Andreas Holzem, Volker Leppin, Claus Ar-
nold and Norbert Haag, to mark the 500th anniversary of
the Reformation.8
The present review will deal mainly with the study
by Martin Treu, included in the aforementioned book,
which indicates the main subjects in Luthers iconog-
raphy that appeared in the early modern period and in
the nineteenth century.9 While discussing other papers,
I shall concentrate above all on facts that help to better
understand the origins of and the message carried by the
most important iconographie formulas indicated by Treu.
I also intend to consider the relevance of Treu s compila-
tion and, if needed, supplement it with additional items.
The crucial role in recording the appearance of Mar-
tin Luther in various periods of his life was played by Lu-
cas Cranach the Elder, a painter active in Wittenberg. Nu-
merous studies dealing with the relationship of these two
men emphasised their cordial friendship’, which, accord-
ing to Anja Ottilie Ilg, resulted in the fact that mainly bust
portraits of Luther were picked up from Cranach’s exten-
sive oeuvre for deeper analysis, since they were believed
to represent a faithful likeness not only of Luther’s phys-
iognomy, but of his psychological features as well, with
which the painter, as his close friend, must have been well
acquainted. Relatively less attention has been devoted to
Cranach’s official portraits of Luther, which had played
a much more important role in shaping his iconography.10
The Wittenberg painter repeatedly, in numerous paintings
and propagandistic prints, represented a full-figure image
of the sturdily built Luther dressed in an ample gown and