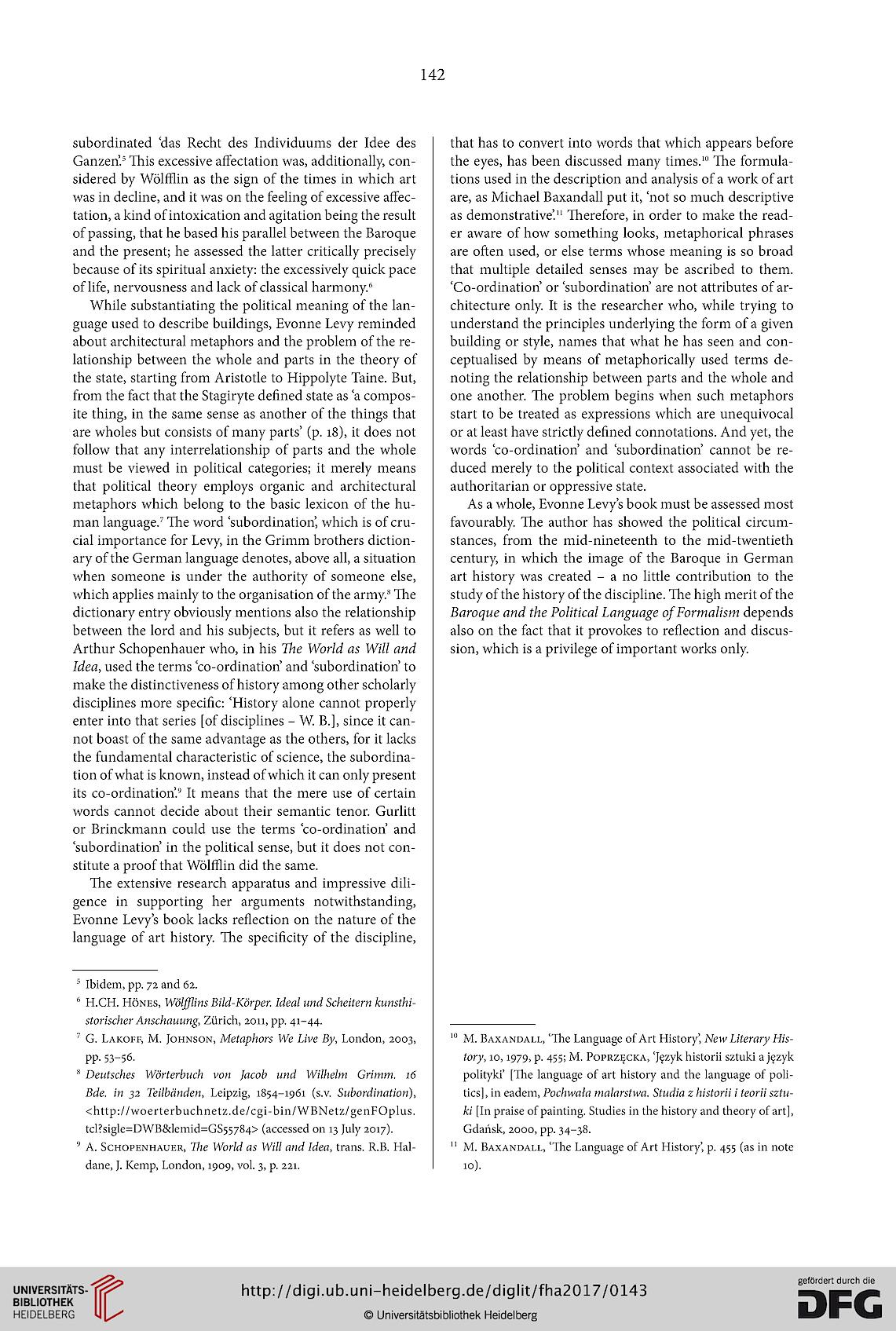 subordinateci ‘das Recht des Individuums der Idee des
Ganzen.5 This excessive affectation was, additionally, con-
sidered by Wölfflin as the sign of the times in which art
was in decline, and it was on the feeling of excessive affec-
tation, a kind of intoxication and agitation being the result
of passing, that he based his parallel between the Baroque
and the present; he assessed the latter critically precisely
because of its spiritual anxiety: the excessively quick pace
of life, nervousness and lack of classical harmony.6
While substantiating the political meaning of the lan-
guage used to describe buildings, Evonne Levy reminded
about architectural metaphors and the problem of the re-
lationship between the whole and parts in the theory of
the state, starting from Aristotle to Hippolyte Taine. But,
from the fact that the Stagiryte defined state as a compos-
ite thing, in the same sense as another of the things that
are wholes but consists of many parts’ (p. 18), it does not
follow that any interrelationship of parts and the whole
must be viewed in political categories; it merely means
that political theory employs organic and architectural
metaphors which belong to the basic lexicon of the hu-
man language.7 The word subordination, which is of cru-
cial importance for Levy, in the Grimm brothers diction-
ary of the German language denotes, above all, a situation
when someone is under the authority of someone else,
which applies mainly to the organisation of the army.8 The
dictionary entry obviously mentions also the relationship
between the lord and his subjects, but it refers as well to
Arthur Schopenhauer who, in his The World as Will and
Idea, used the terms co-ordination and subordination to
make the distinctiveness of history among other scholarly
disciplines more specific: ‘History alone cannot properly
enter into that series [of disciplines - W. B.], since it can-
not boast of the same advantage as the others, for it lacks
the fundamental characteristic of science, the subordina-
tion of what is known, instead of which it can only present
its co-ordination.9 It means that the mere use of certain
words cannot decide about their semantic tenor. Gurlitt
or Brinckmann could use the terms ‘co-ordination and
‘subordination in the political sense, but it does not con-
stitute a proof that Wölfflin did the same.
The extensive research apparatus and impressive dili-
gence in supporting her arguments notwithstanding,
Evonne Levy’s book lacks reflection on the nature of the
language of art history. The specificity of the discipline,

that has to convert into words that which appears before
the eyes, has been discussed many times.10 * The formula-
tions used in the description and analysis of a work of art
are, as Michael Baxandall put it, ‘not so much descriptive
as demonstrative’.11 Therefore, in order to make the read-
er aware of how something looks, metaphorical phrases
are often used, or else terms whose meaning is so broad
that multiple detailed senses may be ascribed to them.
‘Co-ordination or ‘subordination are not attributes of ar-
chitecture only. It is the researcher who, while trying to
understand the principles underlying the form of a given
building or style, names that what he has seen and con-
ceptualised by means of metaphorically used terms de-
noting the relationship between parts and the whole and
one another. The problem begins when such metaphors
start to be treated as expressions which are unequivocal
or at least have strictly defined connotations. And yet, the
words ‘co-ordination and ‘subordination cannot be re-
duced merely to the political context associated with the
authoritarian or oppressive state.
As a whole, Evonne Levy’s book must be assessed most
favourably. The author has showed the political circum-
stances, from the mid-nineteenth to the mid-twentieth
century, in which the image of the Baroque in German
art history was created - a no little contribution to the
study of the history of the discipline. The high merit of the
Baroque and the Political Language of Formalism depends
also on the fact that it provokes to reflection and discus-
sion, which is a privilege of important works only.