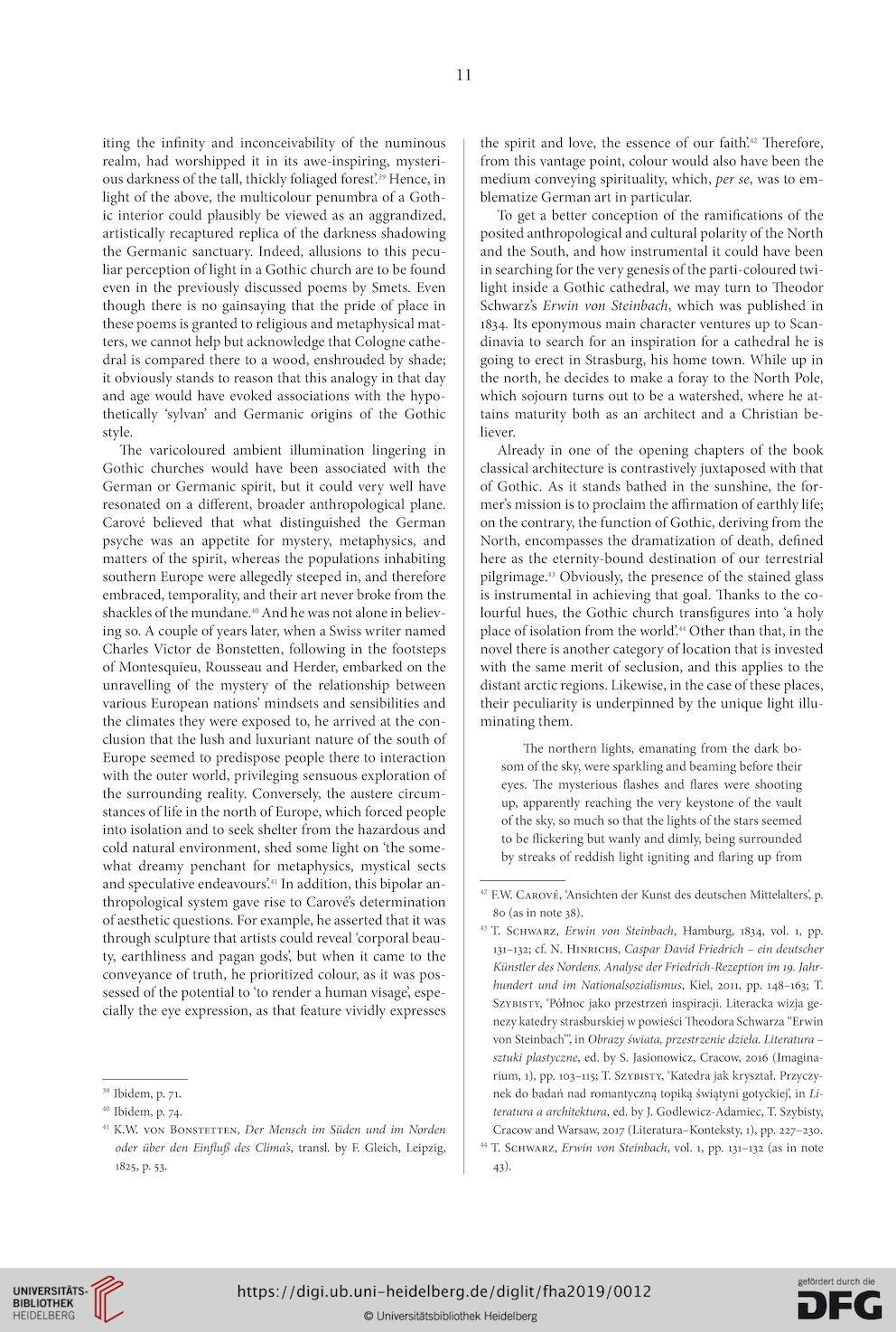 iting the infinity and inconceivability of the numinous
realm, had worshipped it in its awe-inspiring, mysteri-
ous darkness of the tall, thickly foliaged forest’.39 Hence, in
light of the above, the multicolour penumbra of a Goth-
ic interior could plausibly be viewed as an aggrandized,
artistically recaptured replica of the darkness shadowing
the Germanic sanctuary Indeed, allusions to this pecu-
liar perception of light in a Gothic church are to be found
even in the previously discussed poems by Smets. Even
though there is no gainsaying that the pride of place in
these poems is granted to religious and metaphysical mat-
ters, we cannot help but acknowledge that Cologne cathe-
dral is compared there to a wood, enshrouded by shade;
it obviously stands to reason that this analogy in that day
and age would have evoked associations with the hypo-
thetically sylvan and Germanic origins of the Gothic
style.
The varicoloured ambient illumination lingering in
Gothic churches would have been associated with the
German or Germanic spirit, but it could very well have
resonated on a different, broader anthropological plane.
Carové believed that what distinguished the German
psyche was an appetite for mystery, metaphysics, and
matters of the spirit, whereas the populations inhabiting
southern Europe were allegedly steeped in, and therefore
embraced, temporality, and their art never broke from the
shackles of the mundane.40 And he was not alone in believ-
ing so. A couple of years later, when a Swiss writer named
Charles Victor de Bonstetten, following in the footsteps
of Montesquieu, Rousseau and Herder, embarked on the
unravelling of the mystery of the relationship between
various European nations’ mindsets and sensibilities and
the climates they were exposed to, he arrived at the con-
clusion that the lush and luxuriant nature of the south of
Europe seemed to predispose people there to interaction
with the outer world, privileging sensuous exploration of
the surrounding reality. Conversely, the austere circum-
stances of life in the north of Europe, which forced people
into isolation and to seek shelter from the hazardous and
cold natural environment, shed some light on ‘the some-
what dreamy penchant for metaphysics, mystical sects
and speculative endeavours’.41 In addition, this bipolar an-
thropological system gave rise to Caroves determination
of aesthetic questions. For example, he asserted that it was
through sculpture that artists could reveal corporal beau-
ty, earthliness and pagan gods’, but when it came to the
conveyance of truth, he prioritized colour, as it was pos-
sessed of the potential to ‘to render a human visage’, espe-
cially the eye expression, as that feature vividly expresses

the spirit and love, the essence of our faith’.42 Therefore,
from this vantage point, colour would also have been the
medium conveying spirituality, which, per se, was to em-
blematize German art in particular.
To get a better conception of the ramifications of the
posited anthropological and cultural polarity of the North
and the South, and how instrumental it could have been
in searching for the very genesis of the parti-coloured twi-
light inside a Gothic cathedral, we may turn to Theodor
Schwarz’s Erwin von Steinbach, which was published in
1834. Its eponymous main character ventures up to Scan-
dinavia to search for an inspiration for a cathedral he is
going to erect in Strasburg, his home town. While up in
the north, he decides to make a foray to the North Pole,
which sojourn turns out to be a watershed, where he at-
tains maturity both as an architect and a Christian be-
liever.
Already in one of the opening chapters of the book
classical architecture is contrastively juxtaposed with that
of Gothic. As it stands bathed in the sunshine, the for-
mer’s mission is to proclaim the affirmation of earthly life;
on the contrary, the function of Gothic, deriving from the
North, encompasses the dramatization of death, defined
here as the eternity-bound destination of our terrestrial
pilgrimage.43 Obviously, the presence of the stained glass
is instrumental in achieving that goal. Thanks to the co-
lourful hues, the Gothic church transfigures into ‘a holy
place of isolation from the world’.44 Other than that, in the
novel there is another category of location that is invested
with the same merit of seclusion, and this applies to the
distant arctic regions. Likewise, in the case of these places,
their peculiarity is underpinned by the unique light illu-
minating them.
The northern lights, emanating from the dark bo-
som of the sky, were sparkling and beaming before their
eyes. The mysterious flashes and flares were shooting
up, apparently reaching the very keystone of the vault
of the sky, so much so that the lights of the stars seemed
to be flickering but wanly and dimly, being surrounded
by streaks of reddish light igniting and flaring up from