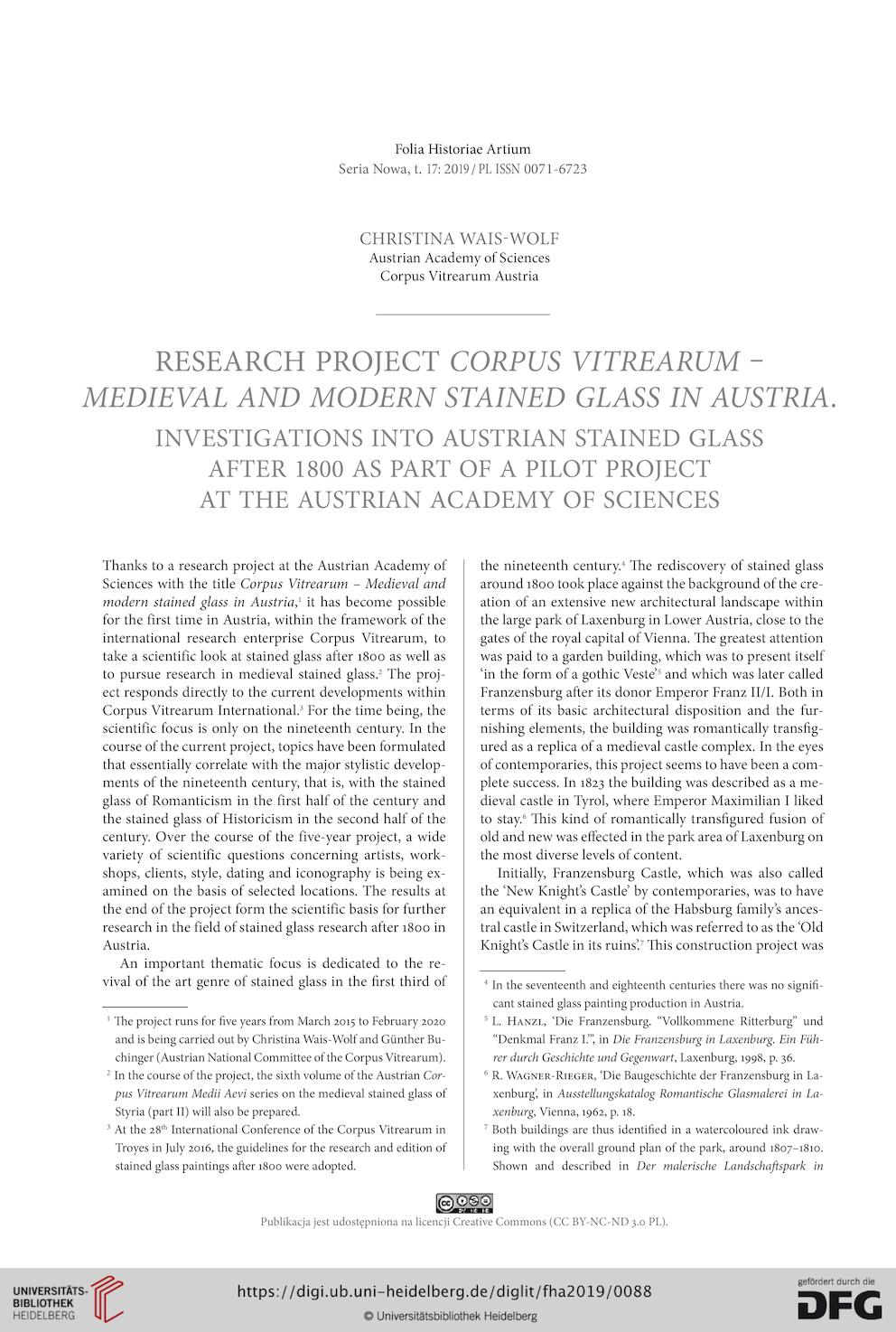 Thanks to a research project at the Austrian Academy of
Sciences with the title Corpus Vitrearum - Medieval and
modern stained glass in Austria,1 it has become possible
for the first time in Austria, within the framework of the
international research enterprise Corpus Vitrearum, to
take a scientific look at stained glass after 1800 as well as
to pursue research in medieval stained glass.2 The proj-
ect responds directly to the current developments within
Corpus Vitrearum International.3 For the time being, the
scientific focus is only on the nineteenth century. In the
course of the current project, topics have been formulated
that essentially correlate with the major stylistic develop-
ments of the nineteenth century, that is, with the stained
glass of Romanticism in the first half of the century and
the stained glass of Historicism in the second half of the
century. Over the course of the five-year project, a wide
variety of scientific questions concerning artists, work-
shops, clients, style, dating and iconography is being ex-
amined on the basis of selected locations. The results at
the end of the project form the scientific basis for further
research in the field of stained glass research after 1800 in
Austria.
An important thematic focus is dedicated to the re-
vival of the art genre of stained glass in the first third of

1 The project runs for five years from March 2015 to February 2020
and is being carried out by Christina Wais-Wolf and Günther Bu-
chinger (Austrian National Committee of the Corpus Vitrearum).
2 In the course of the project, the sixth volume of the Austrian Cor-
pus Vitrearum Medii Aevi series on the medieval stained glass of
Styria (part II) will also be prepared.
3 At the 28th International Conference of the Corpus Vitrearum in
Troyes in July 2016, the guidelines for the research and edition of
stained glass paintings after 1800 were adopted.

the nineteenth century.4 The rediscovery of stained glass
around 1800 took place against the background of the cre-
ation of an extensive new architectural landscape within
the large park of Laxenburg in Lower Austria, close to the
gates of the royal capital of Vienna. The greatest attention
was paid to a garden building, which was to present itself
‘in the form of a gothic Veste’5 and which was later called
Franzensburg after its donor Emperor Franz II/I. Both in
terms of its basic architectural disposition and the fur-
nishing elements, the building was romantically transfig-
ured as a replica of a medieval castle complex. In the eyes
of contemporaries, this project seems to have been a com-
plete success. In 1823 the building was described as a me-
dieval castle in Tyrol, where Emperor Maximilian I liked
to stay.6 This kind of romantically transfigured fusion of
old and new was effected in the park area of Laxenburg on
the most diverse levels of content.
Initially, Franzensburg Castle, which was also called
the ‘New Knights Castle’ by contemporaries, was to have
an equivalent in a replica of the Habsburg family’s ances-
tral castle in Switzerland, which was referred to as the ‘Old
Knight’s Castle in its ruins’.7 This construction project was