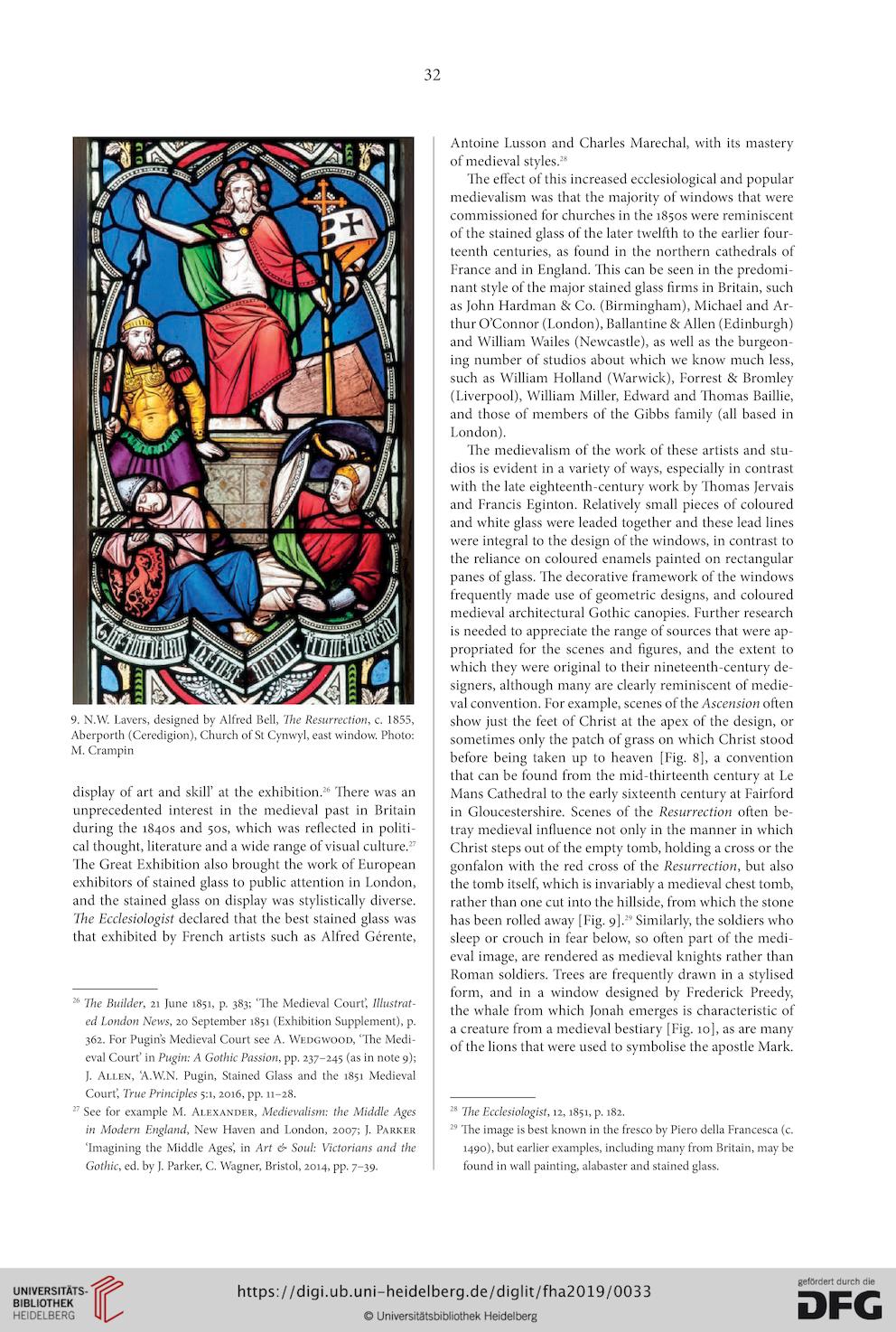 display of art and skill’ at the exhibition.26 There was an
unprecedented interest in the medieval past in Britain
during the 1840s and 50s, which was reflected in politi-
cal thought, literature and a wide range of visual culture.27
The Great Exhibition also brought the work of European
exhibitors of stained glass to public attention in London,
and the stained glass on display was stylistically diverse.
The Ecclesiologist declared that the best stained glass was
that exhibited by French artists such as Alfred Gerente,

Antoine Lusson and Charles Marechai, with its mastery
of medieval styles.28
The effect of this increased ecclesiological and popular
medievalism was that the majority of windows that were
commissioned for churches in the 1850s were reminiscent
of the stained glass of the later twelfth to the earlier four-
teenth centuries, as found in the northern cathedrals of
France and in England. This can be seen in the predomi-
nant style of the major stained glass firms in Britain, such
as John Hardman & Co. (Birmingham), Michael and Ar-
thur O’Connor (London), Ballantine & Allen (Edinburgh)
and William Wailes (Newcastle), as well as the burgeon-
ing number of studios about which we know much less,
such as William Holland (Warwick), Forrest & Bromley
(Liverpool), William Miller, Edward and Thomas Baillie,
and those of members of the Gibbs family (all based in
London).
The medievalism of the work of these artists and stu-
dios is evident in a variety of ways, especially in contrast
with the late eighteenth-century work by Thomas Jervais
and Francis Eginton. Relatively small pieces of coloured
and white glass were leaded together and these lead lines
were integral to the design of the windows, in contrast to
the reliance on coloured enamels painted on rectangular
panes of glass. The decorative framework of the windows
frequently made use of geometric designs, and coloured
medieval architectural Gothic canopies. Further research
is needed to appreciate the range of sources that were ap-
propriated for the scenes and figures, and the extent to
which they were original to their nineteenth-century de-
signers, although many are clearly reminiscent of medie-
val convention. For example, scenes of the Ascension often
show just the feet of Christ at the apex of the design, or
sometimes only the patch of grass on which Christ stood
before being taken up to heaven [Fig. 8], a convention
that can be found from the mid-thirteenth century at Le
Mans Cathedral to the early sixteenth century at Fairford
in Gloucestershire. Scenes of the Resurrection often be-
tray medieval influence not only in the manner in which
Christ steps out of the empty tomb, holding a cross or the
gonfalon with the red cross of the Resurrection, but also
the tomb itself, which is invariably a medieval chest tomb,
rather than one cut into the hillside, from which the stone
has been rolled away [Fig. 9].29 Similarly, the soldiers who
sleep or crouch in fear below, so often part of the medi-
eval image, are rendered as medieval knights rather than
Roman soldiers. Trees are frequently drawn in a stylised
form, and in a window designed by Frederick Preedy,
the whale from which Jonah emerges is characteristic of
a creature from a medieval bestiary [Fig. 10], as are many
of the lions that were used to symbolise the apostle Mark.

28 The Ecclesiologist, 12,1851, p. 182.
29 The image is best known in the fresco by Piero della Francesca (c.
1490), but earlier examples, including many from Britain, may be
found in wall painting, alabaster and stained glass.