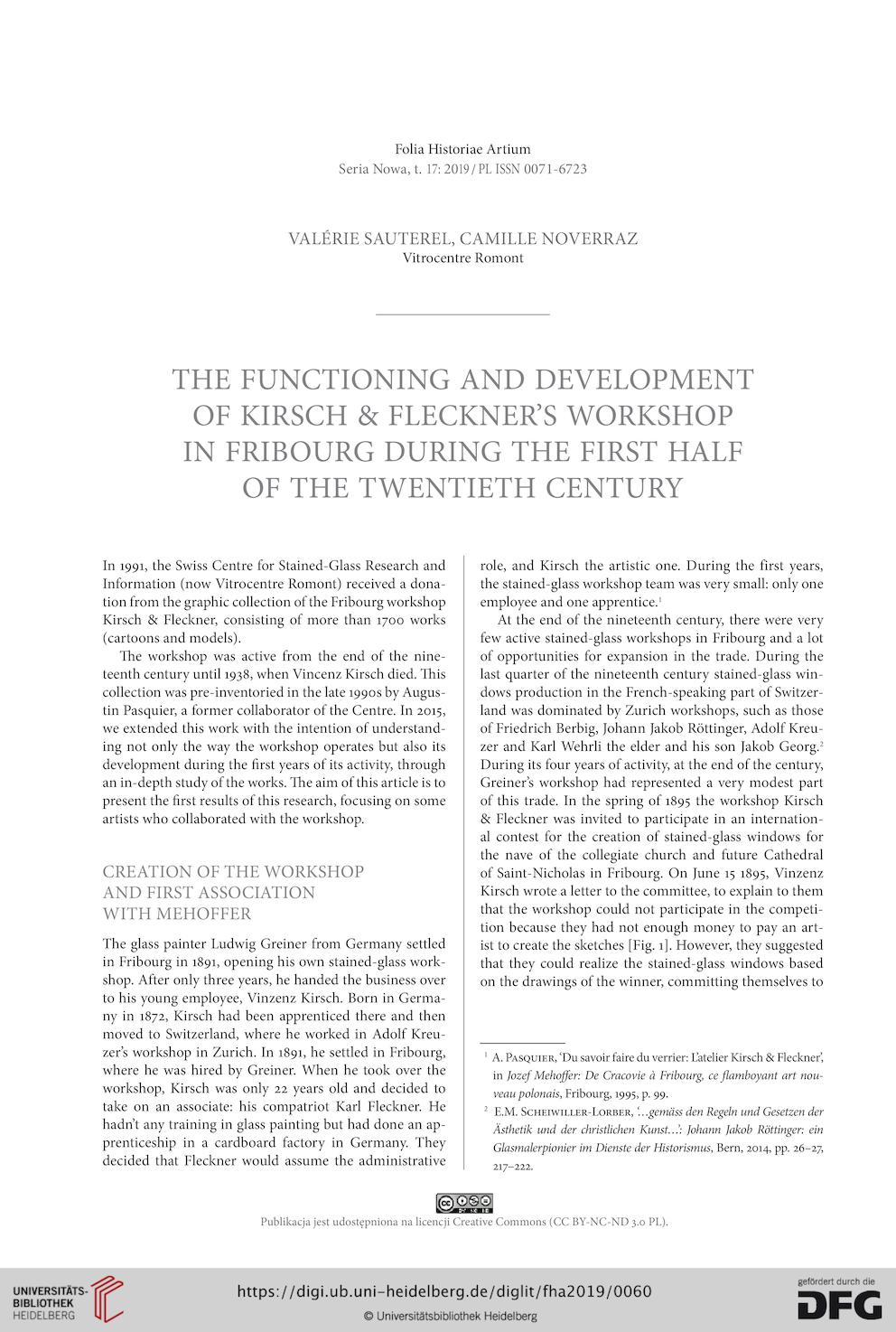 In 1991, the Swiss Centre for Stained-Glass Research and
Information (now Vitrocentre Romont) received a dona-
tion from the graphic collection of the Fribourg workshop
Kirsch & Fleckner, consisting of more than 1700 works
(cartoons and models).
The workshop was active from the end of the nine-
teenth century until 1938, when Vincenz Kirsch died. This
collection was pre-inventoried in the late 1990s by Augus-
tin Pasquier, a former collaborator of the Centre. In 2015,
we extended this work with the intention of understand-
ing not only the way the workshop operates but also its
development during the first years of its activity, through
an in-depth study of the works. The aim of this article is to
present the first results of this research, focusing on some
artists who collaborated with the workshop.
CREATION OF THE WORKSHOP
AND FIRST ASSOCIATION
WITH MEHOFFER
The glass painter Ludwig Greiner from Germany settled
in Fribourg in 1891, opening his own stained-glass work-
shop. After only three years, he handed the business over
to his young employee, Vinzenz Kirsch. Born in Germa-
ny in 1872, Kirsch had been apprenticed there and then
moved to Switzerland, where he worked in Adolf Kreu-
zers workshop in Zurich. In 1891, he settled in Fribourg,
where he was hired by Greiner. When he took over the
workshop, Kirsch was only 22 years old and decided to
take on an associate: his compatriot Karl Fleckner. He
hadn’t any training in glass painting but had done an ap-
prenticeship in a cardboard factory in Germany. They
decided that Fleckner would assume the administrative

role, and Kirsch the artistic one. During the first years,
the stained-glass workshop team was very small: only one
employee and one apprentice.1
At the end of the nineteenth century, there were very
few active stained-glass workshops in Fribourg and a lot
of opportunities for expansion in the trade. During the
last quarter of the nineteenth century stained-glass win-
dows production in the French-speaking part of Switzer-
land was dominated by Zurich workshops, such as those
of Friedrich Berbig, Johann Jakob Röttinger, Adolf Kreu-
zer and Karl Wehrli the elder and his son Jakob Georg.2
During its four years of activity, at the end of the century,
Greiners workshop had represented a very modest part
of this trade. In the spring of 1895 the workshop Kirsch
& Fleckner was invited to participate in an internation-
al contest for the creation of stained-glass windows for
the nave of the collegiate church and future Cathedral
of Saint-Nicholas in Fribourg. On June 15 1895, Vinzenz
Kirsch wrote a letter to the committee, to explain to them
that the workshop could not participate in the competi-
tion because they had not enough money to pay an art-
ist to create the sketches [Fig. 1]. However, they suggested
that they could realize the stained-glass windows based
on the drawings of the winner, committing themselves to