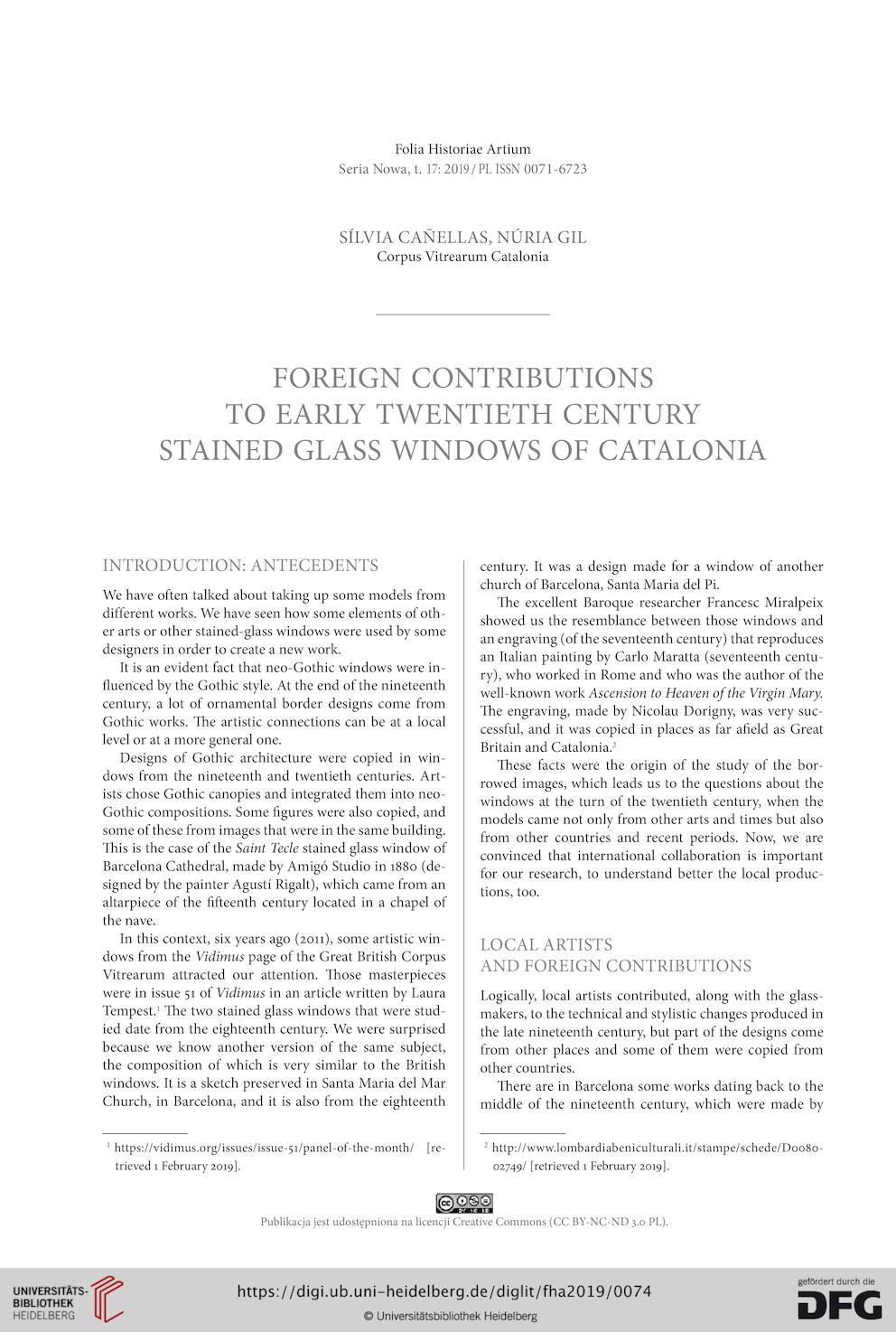 INTRODUCTION: ANTECEDENTS
We have often talked about taking up some models from
different works. We have seen how some elements of oth-
er arts or other stained-glass windows were used by some
designers in order to create a new work.
It is an evident fact that neo-Gothic windows were in-
fluenced by the Gothic style. At the end of the nineteenth
century, a lot of ornamental border designs come from
Gothic works. The artistic connections can be at a local
level or at a more general one.
Designs of Gothic architecture were copied in win-
dows from the nineteenth and twentieth centuries. Art-
ists chose Gothic canopies and integrated them into neo-
Gothic compositions. Some figures were also copied, and
some of these from images that were in the same building.
This is the case of the Saint Tede stained glass window of
Barcelona Cathedral, made by Amigó Studio in 1880 (de-
signed by the painter Agusti Rigalt), which came from an
altarpiece of the fifteenth century located in a chapel of
the nave.
In this context, six years ago (2011), some artistic win-
dows from the Vidimus page of the Great British Corpus
Vitrearum attracted our attention. Those masterpieces
were in issue 51 of Vidimus in an article written by Laura
Tempest.1 The two stained glass windows that were stud-
ied date from the eighteenth century. We were surprised
because we know another version of the same subject,
the composition of which is very similar to the British
windows. It is a sketch preserved in Santa Maria del Mar
Church, in Barcelona, and it is also from the eighteenth

century. It was a design made for a window of another
church of Barcelona, Santa Maria del Pi.
The excellent Baroque researcher Francesc Miralpeix
showed us the resemblance between those windows and
an engraving (of the seventeenth century) that reproduces
an Italian painting by Carlo Maratta (seventeenth centu-
ry), who worked in Rome and who was the author of the
well-known work Ascension to Heaven of the Virgin Mary.
The engraving, made by Nicolau Dorigny, was very suc-
cessful, and it was copied in places as far afield as Great
Britain and Catalonia.2
These facts were the origin of the study of the bor-
rowed images, which leads us to the questions about the
windows at the turn of the twentieth century, when the
models came not only from other arts and times but also
from other countries and recent periods. Now, we are
convinced that international collaboration is important
for our research, to understand better the local produc-
tions, too.
LOCAL ARTISTS
AND FOREIGN CONTRIBUTIONS
Logically, local artists contributed, along with the glass-
makers, to the technical and stylistic changes produced in
the late nineteenth century, but part of the designs come
from other places and some of them were copied from
other countries.
There are in Barcelona some works dating back to the
middle of the nineteenth century, which were made by