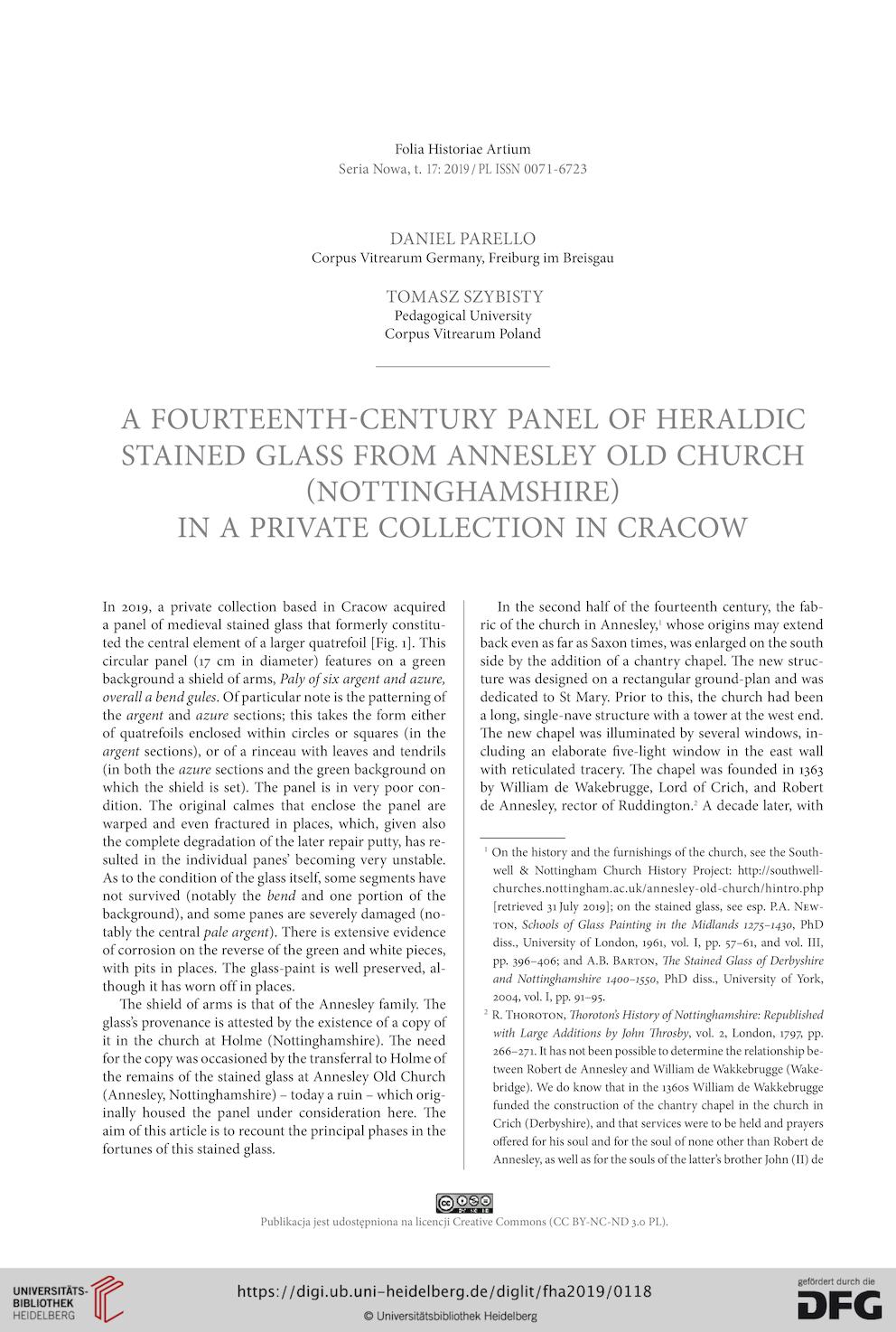 In 2019, a private collection based in Cracow acquired
a panel of medieval stained glass that formerly constitu-
ted the central element of a larger quatrefoil [Fig. 1]. This
circular panel (17 cm in diameter) features on a green
background a shield of arms, Paly of six argent and azure,
overall a bend gules. Of particular note is the patterning of
the argent and azure sections; this takes the form either
of quatrefoils enclosed within circles or squares (in the
argent sections), or of a rinceau with leaves and tendrils
(in both the azure sections and the green background on
which the shield is set). The panel is in very poor con-
dition. The original calmes that enclose the panel are
warped and even fractured in places, which, given also
the complete degradation of the later repair putty, has re-
sulted in the individual panes’ becoming very unstable.
As to the condition of the glass itself, some segments have
not survived (notably the bend and one portion of the
background), and some panes are severely damaged (no-
tably the central pale argent). There is extensive evidence
of corrosion on the reverse of the green and white pieces,
with pits in places. The glass-paint is well preserved, al-
though it has worn off in places.
The shield of arms is that of the Annesley family. The
glass’s provenance is attested by the existence of a copy of
it in the church at Holme (Nottinghamshire). The need
for the copy was occasioned by the transferral to Holme of
the remains of the stained glass at Annesley Old Church
(Annesley, Nottinghamshire) - today a ruin - which orig-
inally housed the panel under consideration here. The
aim of this article is to recount the principal phases in the
fortunes of this stained glass.

In the second half of the fourteenth century, the fab-
ric of the church in Annesley,1 whose origins may extend
back even as far as Saxon times, was enlarged on the south
side by the addition of a chantry chapel. The new struc-
ture was designed on a rectangular ground-plan and was
dedicated to St Mary. Prior to this, the church had been
a long, single-nave structure with a tower at the west end.
The new chapel was illuminated by several windows, in-
cluding an elaborate five-light window in the east wall
with reticulated tracery. The chapel was founded in 1363
by William de Wakebrugge, Lord of Crich, and Robert
de Annesley, rector of Ruddington.2 A decade later, with

1 On the history and the furnishings of the church, see the South-
well & Nottingham Church History Project: http://southwell-
churches.nottingham.ac.uk/annesley-old-church/hintro.php
[retrieved 31 July 2019]; on the stained glass, see esp. P.A. New-
ton, Schools of Glass Painting in the Midlands 1275-1430, PhD
diss., University of London, 1961, vol. I, pp. 57-61, and vol. Ill,
pp. 396-406; and A.B. Barton, The Stained Glass of Derbyshire
and Nottinghamshire 1400-1550, PhD diss., University of York,
2004, vol. I, pp. 91-95.
2 R. Thoroton, Thorotons History of Nottinghamshire: Republished
with Large Additions by John Throsby, vol. 2, London, 1797, pp.
266-271. It has not been possible to determine the relationship be-
tween Robert de Annesley and William de Wakkebrugge (Wake-
bridge). We do know that in the 1360s William de Wakkebrugge
funded the construction of the chantry chapel in the church in
Crich (Derbyshire), and that services were to be held and prayers
offered for his soul and for the soul of none other than Robert de
Annesley, as well as for the souls of the latter’s brother John (II) de