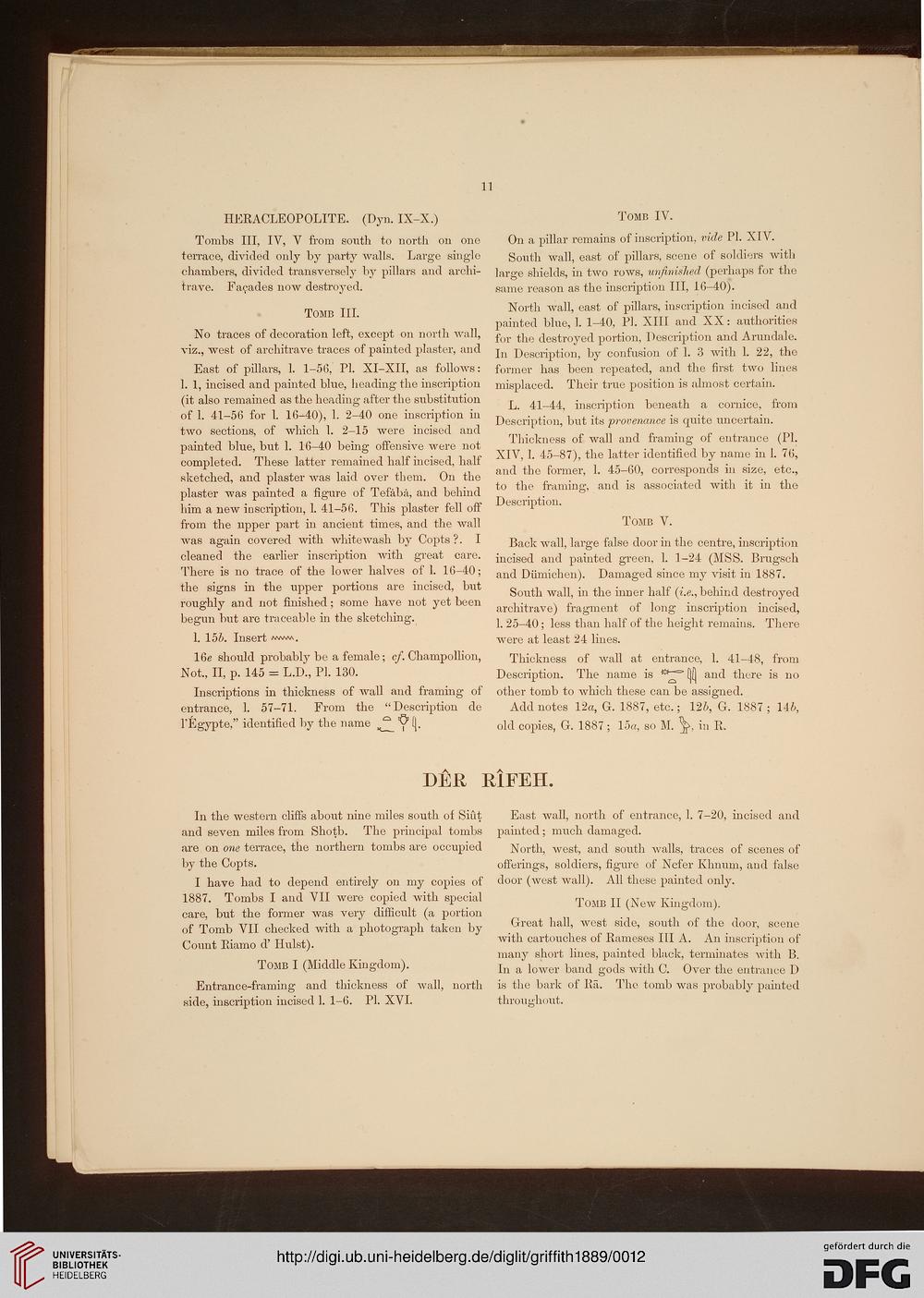 No traces of decoration left, except on north wall,
viz., west of architrave traces of painted plaster, and

East of pillars, 1. 1-56, PL XI-XII, as follows:
1. 1, incised and painted blue, heading the inscription
(it also remained as the heading after the substitution
of 1. 41-56 for 1. 16-40), 1. 2-40 one inscription in
two sections, of which 1. 2-15 were incised and
painted blue, but 1. 16-40 being offensive were not
completed. These latter remained half incised, half
sketched, and plaster was laid over them. On the
plaster was painted a figure of Tefaba, and behind
him a new inscription, 1. 41-56. This plaster fell off
from the upper part in ancient times, and the wall
was again covered with whitewash by Copts ?. I
cleaned the earlier inscription with great care.
There is no trace of the lower halves of 1. 16-40;
the signs in the upper portions are incised, but
roughly and not finished; some have not yet been
begun but are traceable in the sketching.

Inscriptions in thickness of wall and framing of
entrance, 1. 57-71. From the "Description de
l'Egypte," identified by the name Q y i[.

On a pillar remains of inscription, vide PL XIV.

South wall, east of pillars, scene of soldiers with
large shields, in two rows, unfinished (perhaps for the
same reason as the inscription III, 16-40).

North wall, east of pillars, inscription incised and
painted blue, 1. 1-40, PL XIII and XX: authorities
for the destroyed portion, Description and Arundale.
In Description, by confusion of 1. 3 with 1. 22, the
former has been repeated, and the first two lines
misplaced. Their true position is almost certain.

L. 41-44, inscription beneath a cornice, from
Description, but its provenance is quite uncertain.

Back wTall, large false door in the centre, inscription
incised and painted green, 1. 1-24 (MSS. Brugsch
and Diimichen). Damaged since my visit in 1887.

South wall, in the inner half (i.e., behind destroyed
architrave) fragment of long inscription incised,
1. 25-40; less than half of the height remains. There
were at least 24 lines.

In the western cliffs about nine miles south of Siftt
and seven miles from Shotb. The principal tombs
are on one terrace, the northern tombs are occupied
by the Copts.

I have had to depend entirely on my copies of
1887. Tombs I and VII were copied with special
care, but the former was very difficult (a portion
of Tomb VII checked with a photograph taken by
Count Pdamo d' Hulst).

North, west, and south walls, traces of scenes of
offerings, soldiers, figure of Nefer Khnum, and false
door (west wall). All these painted only.

Great hall, west side, south of the door, scene
with cartouches of Rameses III A. An inscription of
many short lines, painted black, terminates with B.
In a lower band gods with C. Over the entrance D
is the bark of Rii. The tomb was probably painted
throughout.