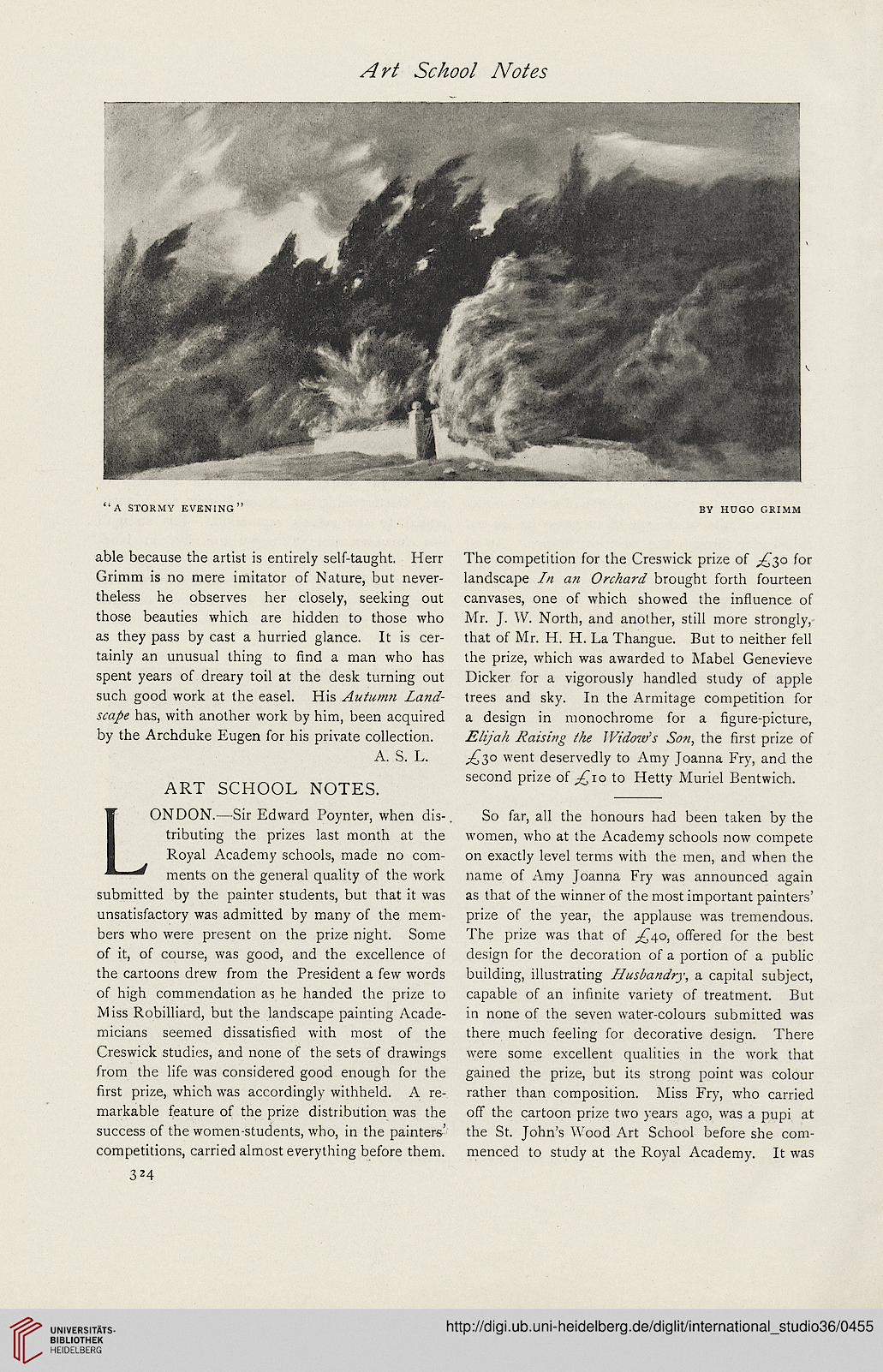 able because the artist is entirely self-taught. Herr
Grimm is no mere imitator of Nature, but never-
theless he observes her closely, seeking out
those beauties which are hidden to those who
as they pass by cast a hurried glance. It is cer-
tainly an unusual thing to hnd a man who has
spent years of dreary toil at the desk turning out
such good work at the easel. His ^77^7777777
A'a/g has, with another work by him, been acquired
by the Archduke Eugen for his private collection.
A. S. L.
ART SCHOOL NOTES.
T* ONDON.—Sir Edward Poynter, when dis-.
tributing the prizes last month at the
Royal Academy schools, made no com-
^ ments on the general quality of the work
submitted by the painter students, but that it was
unsatisfactory was admitted by many of the mem-
bers who were present on the prize night. Some
of it, of course, was good, and the excellence of
the cartoons drew from the President a few words
of high commendation as he handed the prize to
Miss Robilliard, but the landscape painting Acade-
micians seemed dissatisfied with most of the
Creswick studies, and none of the sets of drawings
from the life was considered good enough for the
first prize, whicb was accordingly withheld. A re-
markable feature of the prize distribution was the
success of the women-students, who, in the painters'
competitions, carried almost everything before them.

The competition for the Creswick prize of ^30 for
landscape V// %% (?7*<r/%a7-Z brought forth fourteen
canvases, one of which showed the influence of
Mr. J. W. North, and another, still more strongly,
that of Mr. H. H. La Thangue. But to neither fell
the prize, which was awarded to Mabel Genevieve
Dicker for a vigorously handled study of apple
trees and sky. In the Armitage competition for
a design in monochrome for a frgure-picture,
ZVz/h/i Zaz'ifTTy IfWpzfb &?72, the frrst prize of
^30 went deservedly to Amy Joanna Fry, and the
second prize of ^Jro to Hetty Muriel Bentwich.

So far, all the honours had been taken by the
women, who at the Academy schools now compete
on exactly level terms with the men, and when the
name of Amy Joanna Fry was announced again
as that of the winnerof themostimportant painters'
prize of the year, the applause was tremendous.
The prize was that of ^40, offered for the best
design for the decoration of a portion of a public
building, iHustrating a capital subject,
capable of an inhnite variety of treatment. But
in none of the seven water-colours submitted was
there much feeling for decorative design. There
were some excellent qualities in the work that
gained the prize, but its strong point was colour
rather than composition. Miss Fry, who carried
off the cartoon prize two years ago, was a pupi at
the St. John's Wood Art School before she com-
menced to study at the Royal Academy. It was