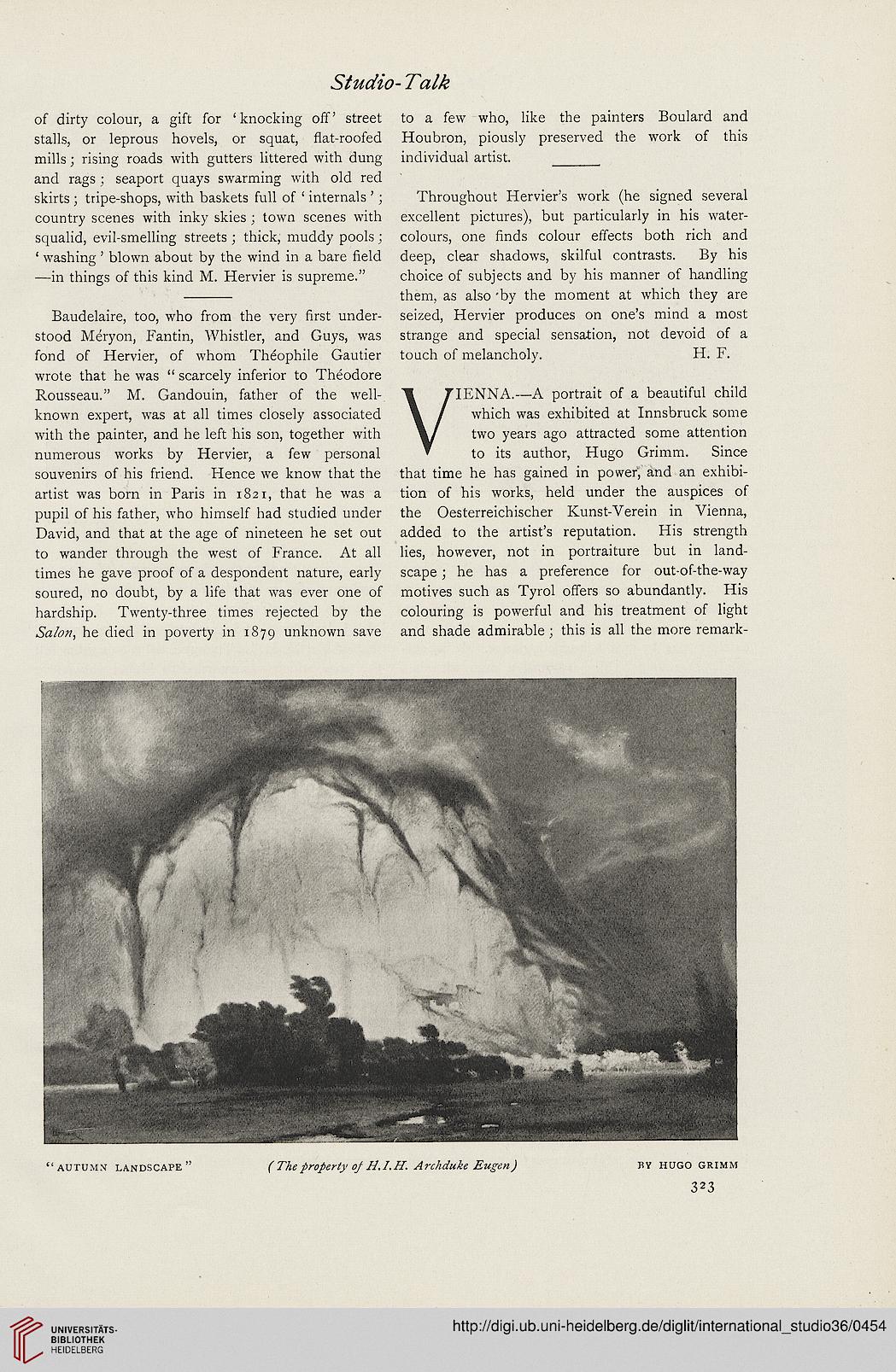 of dirty colour, a. gift for 'knocking off' street
stails, or leprous hoveis, or squat, ftat-roofed
mitls; rising roads with gutters littered with dung
and rags ; seaport quays swarming with old red
skirts ; tripe-shops, with baskets full of ' internals ';
country scenes with inky skies ; town scenes with
squalid, evil-smelling streets ; thick, muddy pools;
' washing ' blown about by the wind in a bare freld
—in things of this kind M. Hervier is supreme."
Baudelaire, too, who from the very first under-
stood Meryon, Fantin, Whistler, and Guys, was
fond of Hervier, of whom Theophilc Gautier
wrote that he was " scarcely inferior to Theodore
Rousseau." M. Gandouin, father of the well-
known expert, was at all times closely associated
with the painter, and he left his son, together with
numerous works by Hervier, a few personal
souvenirs of his friend. Hence we know that the
artist was born in Paris in 1821, that he was a
pupil of his father, who himself had studied under
David, and that at the age of nineteen he set out
to wander through the west of France. At all
times he gave proof of a despondent nature, early
soured, no doubt, by a life that was ever one of
hardship. Twenty-three times rejected by the
tSa/^77, he died in poverty in 1879 unknown save

to a few who, like the painters Boulard and
Houbron, piously preserved the work of this
individual artist.

Throughout Hervier's work (he signed several
excellent pictures), but particularly in his water-
colours, one finds colour effects both rich and
deep, clear shadows, skilful contrasts. By his
choice of subjects and by his manner of handling
them, as also 'by the moment at which they are
seized, Hervier produces on one's mind a most
strange and special sensation, not devoid of a
touch of melancholy. H. F.
7TENNA.—A portrait of a beautiful child
% / which was exhibited at Innsbruck some
\/ two years ago attracted some attention
* to its author, Hugo Grimm. Since
that time he has gained in power', and an exhibi-
tion of his works, held under the auspices of
the Oesterreichischer Kunst-Verein in Vienna,
added to the artist's reputation. His strength
lies, however, not in portraiture but in land-
scape; he has a preference for out-of-the-way
motives such as Tyrol offers so abundantly. His
colouring is powerful and his treatment of light
and shade admirable; this is all the more remark-