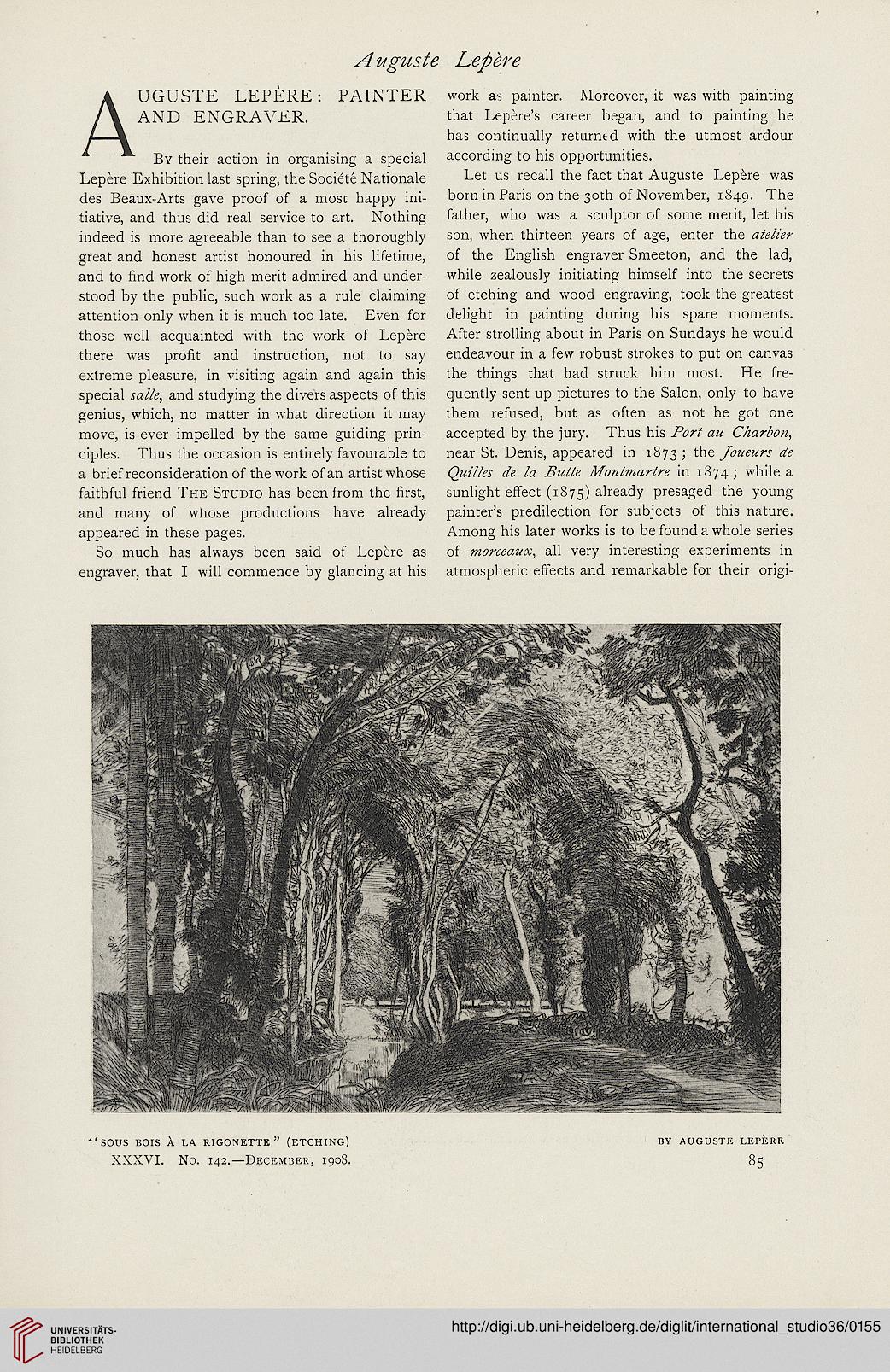 Information about OCR text
A UGUSTE LEPERE: PAIKTER
AND ENGRAVER.
By their action in organising a special
Lepere Exhibition last spring, the Soci^te Nationaie
des Beaux-Arts gave proof of a most happy ini-
tiative, and thus did real service to art. Nothing
indeed is more agreeable than to see a thoroughly
great and honest artist honoured in his lifetime,
and to hnd work of high merit admired and under-
stood by the public, such work as a rule claiming
attention only when it is much too late. Even for
those well acquainted with the work of Lepere
there was proht and instruction, not to say
extreme pleasure, in visiting again and again this
special and studying the divers aspects of this
genius, which, no matter in what direction it may
move, is ever impelled by the same guiding prin-
ciples. Thus the occasion is entirely favourable to
a brief reconsideration of the work of an artist whose
faithful friend THE STUDio has been from the first,
and many of whose productions have already
appeared in these pages.
So much has always been said of Lepere as
engraver, that I will commence by glancing at his

work as painter. Atoreover, it was with painting
that Lepere's career began, and to painting he
has continually returntd with the utmost ardour
according to his opportunities.
Let us recall the fact that Auguste Lepere was
botn in Paris on the 30th of November, 184$. The
father, who was a sculptor of some merit, let his
son, when thirteen years of age, enter the
of the English engraver Smeeton, and the lad,
while zealously initiating himself into the secrets
of etching and wood engraving, took the greatest
delight in painting during his spare moments.
After strolling about in Paris on Sundays he would
endeavour in a few robust strokes to put on canvas
the things that had struck him most. He fre-
quently sent up pictures to the Salon, only to have
them refused, but as often as not he got one
accepted by the jury. Thus his d%a?-A77?,
near St. Denis, appeared in 1873; the
.Z???//!? A/i77?/77M:7*/7T in 1874; while a
sunlight effect (1875) already presaged the young
painter's predilection for subjects of this nature.
Among his later works is to be found a whole series
of ?7:<77TrM&ar, all very interesting experiments in
atmospheric efifects and remarkable for their origi-