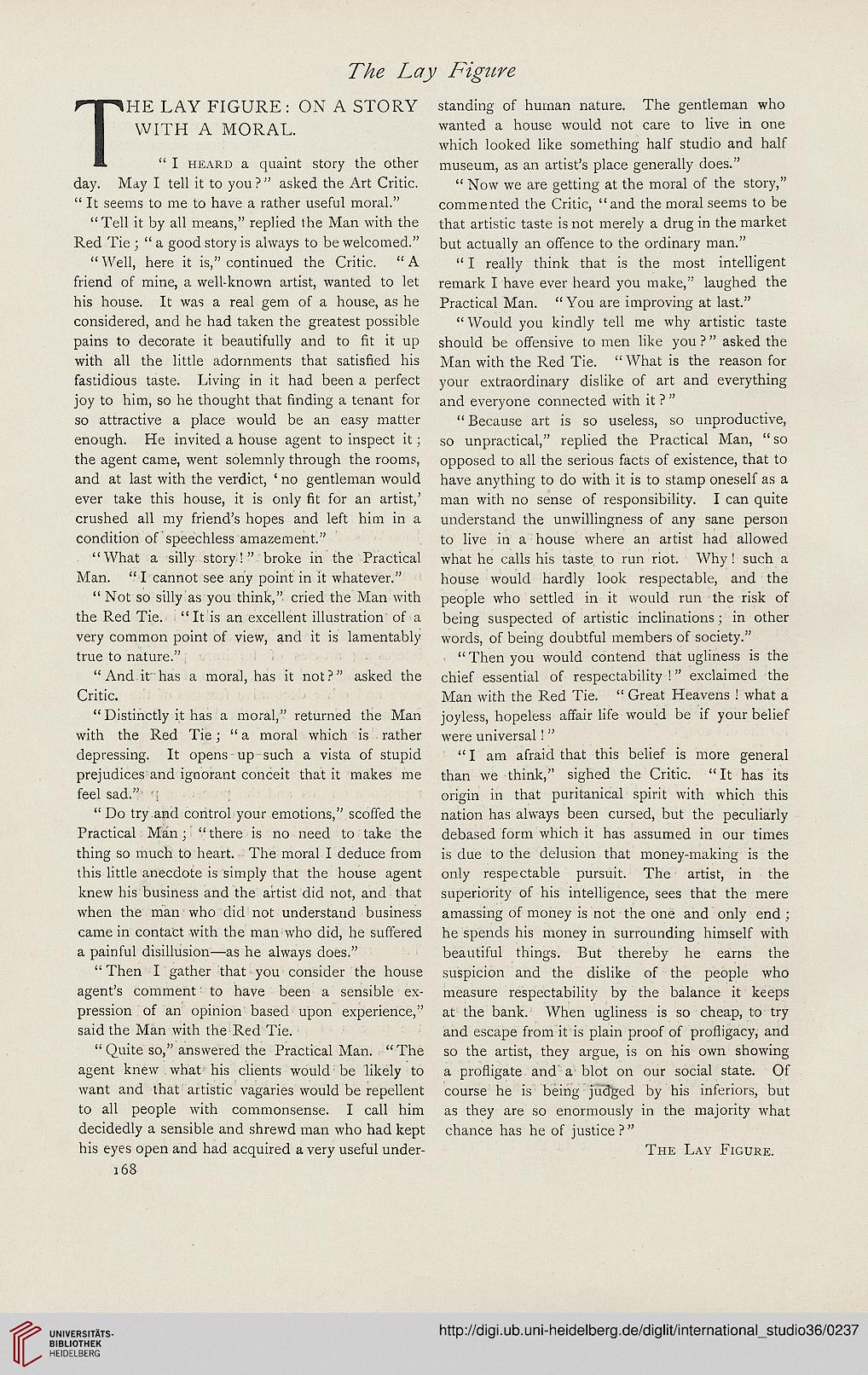 HE LAY FIGURE: ON A STORY
WITH A MORAL.

" I HEARD a quamt story the other
day. May I tell it to you ? " asked the Art Crittc.
" It seems to me to have a rather useful moral."
"Tell it by all means," replied the Man with the
Red Tie ; " a good story is always to be welcomed."
"Well, here it is,"continued the Critic. "A
friend of mine, a well-known artist, wanted to let
his house. It was a real gem of a house, as he
considered, and he had taken the greatest possible
pains to decorate it beautifully and to fit it up
with all the little adornments that satished his
fastidioustaste. Livinginithadbeenaperfect
joy to him, so he thought that finding a tenant for
so attractive a place would be an easy matter
enough. He invited a house agent to inspect it;
the agent came, went solemnly through the rooms,
and at last with the verdict, ' no gentleman would
ever take this house, it is only ht for an artist,'
crushed all my friend's hopes and left him in a
condition of speechless amazement."
"What a silly story !" broke in the Practical
Man. " I cannot see any point in it whatever."
" Not so silly as you think," cried the Man with
the Red Tie. "It is an excellent illustration of a
very common point of view, and it is lamentably
truetonature."
" And it' has a moral, has it not?" asked the
Critic.
" Distinctly it has a moral," returned the Man
with the Red Tie; " a moral which is rather
depressing. It opens up such a vista of stupid
prejudices andignorantconceit thatit makes me
feelsad."
" Do try and control your emotions," scoffed the
Practical Man; "there is no need to take the
thing so much to heart. The moral I deduce from
this little anecdote is simply that the house agent
knew his business and the artist did not, and that
when the man who did not understand business
came in contact with the man who did, he suffered
a painful disillusion—as he always does."
" Then I gather that you consider the house
agent's comment to have been a sensible ex-
pression of an opinion based upon experience,"
said the Man with the Red Tie.
" Quite so," answered the Practical Man. " The
agent knew what his clients would be likely to
want and that artistic vagaries would be repellent
to all people with commonsense. I call him
decidedly a sensible and shrewd man who had kept
his eyes open and had acquired a very useful under-
r68

standing of human nature. The gentleman who
wanted a house would not care to live in one
which looked like something half studio and half
museum, as an artist's place generally does."
" Now we are getting at the moral of the story,"
commented the Critic, "and the moral seems to be
that artistic taste is not merely a drug in the market
but actually an offence to the ordinary man."
" I really think that is the most intelligent
remark I have ever heard you make," laughed the
Practical Man. " You are improving at last."
" Would you kindly tell me why artistic taste
should be offensive to men like you ? " asked the
Man with the Red Tie. "What is the reason for
your extraordinary dislike of art and everything
and everyone connected with it ? "
" Because art is so useless, so unproductive,
so unpractical," replied the Practical Man, "so
opposed to all the serious facts of existence, that to
have anything to do with it is to stamp oneself as a
man with no sense of responsibility. I can quite
understand the unwillingness of any sane person
to live in a house where an artist had altowed
what he calls his taste to run riot. Why ! such a
house would hardly look respectable, and the
people who settled in it would run the risk of
being suspected of artistic inclinations; in other
words, of being doubtful members of society."
"Thenyou would contend thatugliness is the
chief essential of respectability !" exclaimed the
Man with the Red Tie. " Great Heavens .' what a
joyless, hopeless affair life would be if your belief
wereuniversal!"
" I am afraid that this belief is more general
than we think," sighed the Critic. "It has its
origin in that puritanical spirit with which this
nation has always been cursed, but the peculiarly
debased form which it has assumed in our times
is due to the delusion that money-making is the
only respectable pursuit. The artist, in the
superiority of his intelligence, sees that the mere
amassing of money is not the one and only end ;
he spends his money in surrounding himself with
beautiful things. But thereby he earns the
suspicion and the dislike of the people who
measure respectability by the balance it keeps
at the bank. When ugliness is so cheap, to try
and escape from it is plain proof of proHigacy, and
so the artist, they argue, is on his own showing
a profligate and a blot on our social state. Of
course he is being jucfged by his inferiors, but
as they are so enormously in the majority what
chance has he of justice ? "