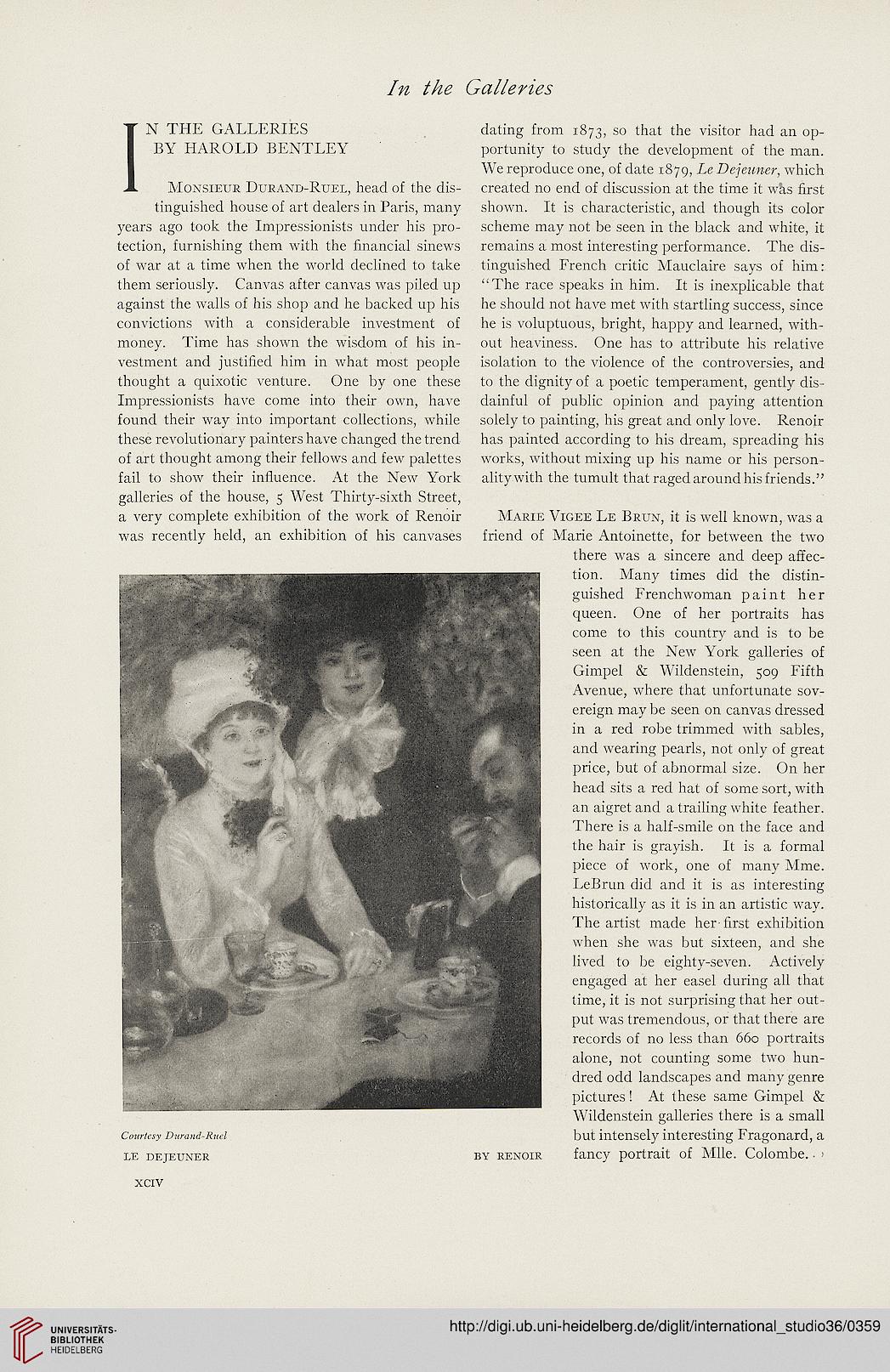 N THE GALLERIES
BY HAROLD BENTLEY
MoNSiEUR DuRAND-RuEL, head of the dis-
tinguished house of art dealers in Paris, many
years ago took the Impressionists under his pro-
tection, furnishing them with the Rnancial sinews
of war at a time when the world declitied to take
thern seriousiy. Canvas after canvas was piled up
against the walls of his shop and he backed up his
convictions with a considerable investment of
money. Time has shown the wisdom of his in-
vestment and justiffed him in what most people
thought a quixotic venture. One by one these
Impressionists have come into their own, have
found their way into important coliections, whiie
these revolutionary painters have changed the trend
of art thought among their feliows and few paiettes
fail to show their infiuence. At the New York
gaHeries of the house, 5 West Thirty-sixth Street,
a very complete exhibition of the work of Renoir
was recently held, an exhibition of his canvases

dating from 1873, so that the visitor had an op-
portunity to study the development of the man.
We reproduce one, of date 1879, Le DejgHwer, which
created no end of discussion at the time it wh.s Hrst
shown. It is characteristic, and though its color
scheme may not be seen in the black and white, it
remains a most interesting performance. The dis-
tinguished French critic Mauclaire says of him:
"The race speaks in him. It is inexplicable that
he should not have met with startling success, since
he is voluptuous, bright, happy and learned, with-
out heaviness. One has to attribute his relative
isolation to the violence of the controversies, and
to the dignity of a poetic temperament, gently dis-
dainful of public opinion and paying attention
solely to painting, his great and only love. Renoir
has painted according to his dream, spreading his
works, without mixing up his name or his person-
alitywith the tumult thatragedaroundhisfriends."
MARIE ViGEE LE BRUN, it is well known, was a
friend of Marie Antoinette, for between the two
there was a sincere and deep affec-
tion. Many times did the distin-
guished Frenchwoman paint her
queen. One of her portraits has
come to this country and is to be
seen at the New York galleries of
Gimpel & Wildenstein, 509 Fifth
Avenue, where that unfortunate sov-
ereign may be seen on canvas dressed
in a red robe trimmed with sables,
and wearing pearls, not only of great
price, but of abnormal size. On her
head sits a red hat of some sort, with
an aigret and a trailing white feather.
There is a half-smile on the face and
the hair is grayish. It is a formal
piece of work, one of many Mme.
LeBrun did and it is as interesting
historically as it is in an artistic way.
The artist made her hrst exhibition
when she was but sixteen, and she
lived to be eighty-seven. Actively
engaged at her easel during all that
time, it is not surprising that her out-
put was tremendous, or that there are
records of no less than 660 portraits
alone, not counting sorne two hun-
dred odd landscapes and many genre
pictures! At these same Gimpel &
Wildenstein galleries there is a small
but intensely interesting Fragonard, a
fancy portrait of Mlle. Colombe. '