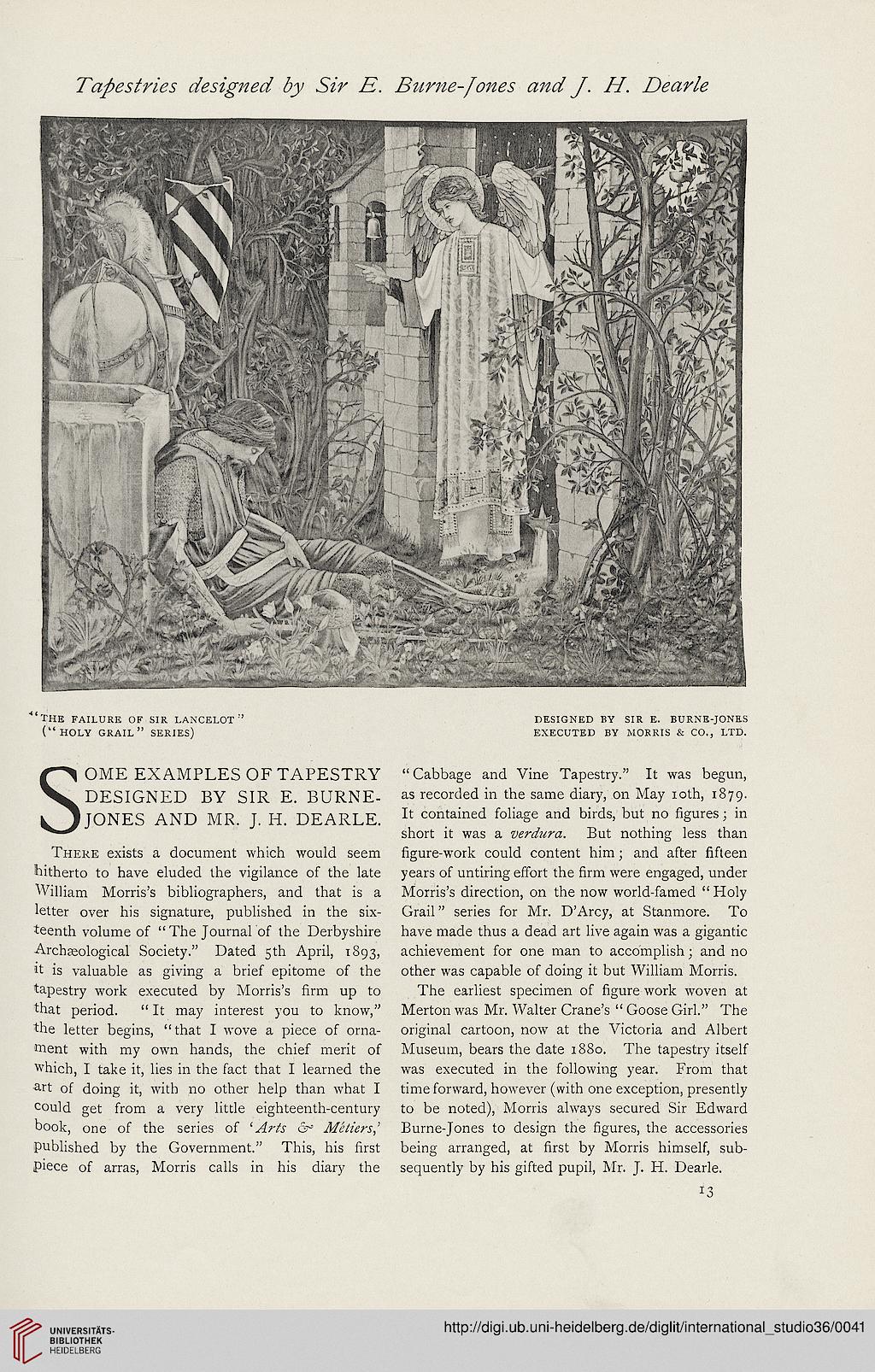 
"'THE FAtLURE OF SIR LANCELOT"
("HOLY GRAtL" SERfES)
OME EXAMPLES OF TAPESTRY
^^DESIGNED BY SIR E. BURNE-
kJJONES AND MR. J. H. DEARLE.
THEKE exists a document which would seem
hitherto to have eluded the vigiiance of the late
WiHiam Morris's bibliographers, and that is a
letter over his signature, published in the six-
teenthvolume of "Thejournal of the Derbyshire
Archreological Society." Dated gth April, 1893,
it is valuable as giving a brief epitome of the
tapestry work executed by Morris's hrm up to
that period. " It may interest you to know,"
the letter begins, " that I wove a piece of orna-
ment with my own hands, the chief merit of
whicb, I take it, lies in the fact that I learned the
^rt of doing it, with no other help than what I
could get from a very little eighteenth-century
book, one of the series of &= A7if7/<?7-r,'
published by the Government." This, his first
piece of arras, Morris calls in his diary the

DEStGNED BY SIR E. BURNE-JONES
EXECUTED BY MORRIS & CO., LTD.
"Cabbage and Yine Tapestry." It was begun,
as recorded in the same diary, on May 10th, 1879.
It contained foliage and birds, but no hgures; in
short it was a W7*<%/7Y:. But nothing less than
hgure-w-ork could content him; and after hfteen
years of untiring effort the hrm were engaged, under
Morris's direction, on the now world-famed " Holy
Grail" series for Mr. D'Arcy, at Stanmore. To
have made thus a dead art live again was a gigantic
achievement for one man to accomplish; and no
other was capable of doing it but William Morris.
The earliest specimen of hgure work woven at
Merton was Mr. Walter Crane's " Goose Girl." The
original cartoon, now at the Victoria and Albert
Museum, bears the date 1880. The tapestry itself
was executed in the following year. Frorn that
timeforward, however (with one exception, presently
to be noted), Morris always secured Sir Edward
Burne-Jones to design the figures, the accessories
being arranged, at hrst by Morris himself, sub-
sequently by his gifted pupil, Mr. J. H. Dearle.