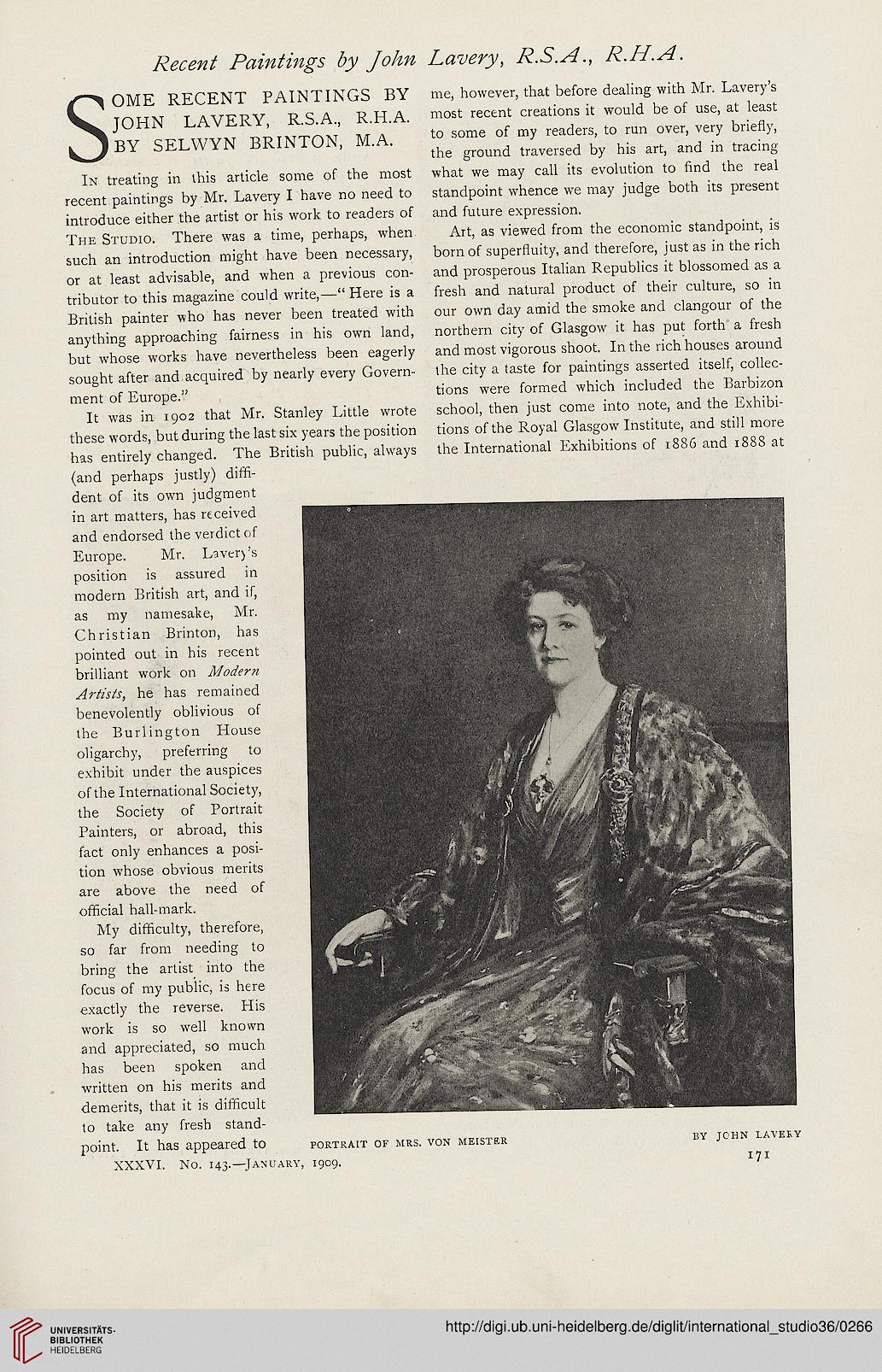 y^^OME RECENT PAINTINGS BY
^^JOHN LAVERY, R.S.A., R.H.A.
k_lBY SELWYN BRINTON, M.A.
IN treating in this articie sonie of the most
recent paintings by Mr. Lavery I have no need to
introduce either the artist or his work to readers of
THE STUDio. There was a time, perhaps, when
such an introduction might have been necessary,
or at ieast advisable, and when a previous con-
tributor to this magazine could write,—" Here is a
British painter who has never been treated with
anything approaching fairness in his own iand,
but whose works have nevertheiess been eageriy
sought after and acquired by neariy every Govern-
ment of Europe."
It was in 1902 that Mr. Staniey Littie wrote
these words, but during the last six years the position
has entirely changed. The British public, always
(and perhaps justiy) diffi-
dent of its own judgment
in art matters, has received
and endorsed the verdictof
Europe. Mr. Laver)'s
position is assured in
modern British art, and if,
as my namesake, Mr.
Christian Brinton, has
pointed out in his recent
briHiant work on
he has remained
benevoiendy obiivious of
the Burlington House
oligarchy, preferring to
exhibit under the auspices
of the Internationai Society,
the Society of Portrait
Painters, or abroad, this
fact only enhances a posi-
tion whose obvious merits
are above the need of
ofHcial haH-mark.
Mydifficuity, therefore,
so far from needing to
bring the artist into the
focus of my public, is here
exactly the reverse. His
work is so well known
and appreciated, so much
has been spoken and
written on his merits and
demerits, that it is difhcult
to take any fresh stand-
point. It has appeared to
XXXVI.

me, however, that before dealing with Mr. Lavery's
most recent creations it would be of use, at least
to some of my readers, to run over, very brieHy,
the ground traversed by his art, and in tracing
what we may call its evolution to hnd the real
standpoint whence we may judge both its present
and future expression.
Att, as viewed from the economic standpoint, is
bornof superfluity, and therefore, just as in the rich
and prosperous Italian Republics it blossomed as a
fresh and natural product of their culture, so in
our own day amid the smoke and clangour of the
northern city of Glasgow it has put forth a fresh
and most vigorous shoot. In the rich houses around
the city a taste for paintings asserted itself, collec-
tions were formed which included the Barbizon
school, then just come into note, and the Exhibi-
tions of the Royal Glasgow Institute, and still more
the International Exhibitions of 1886 and 1888 at