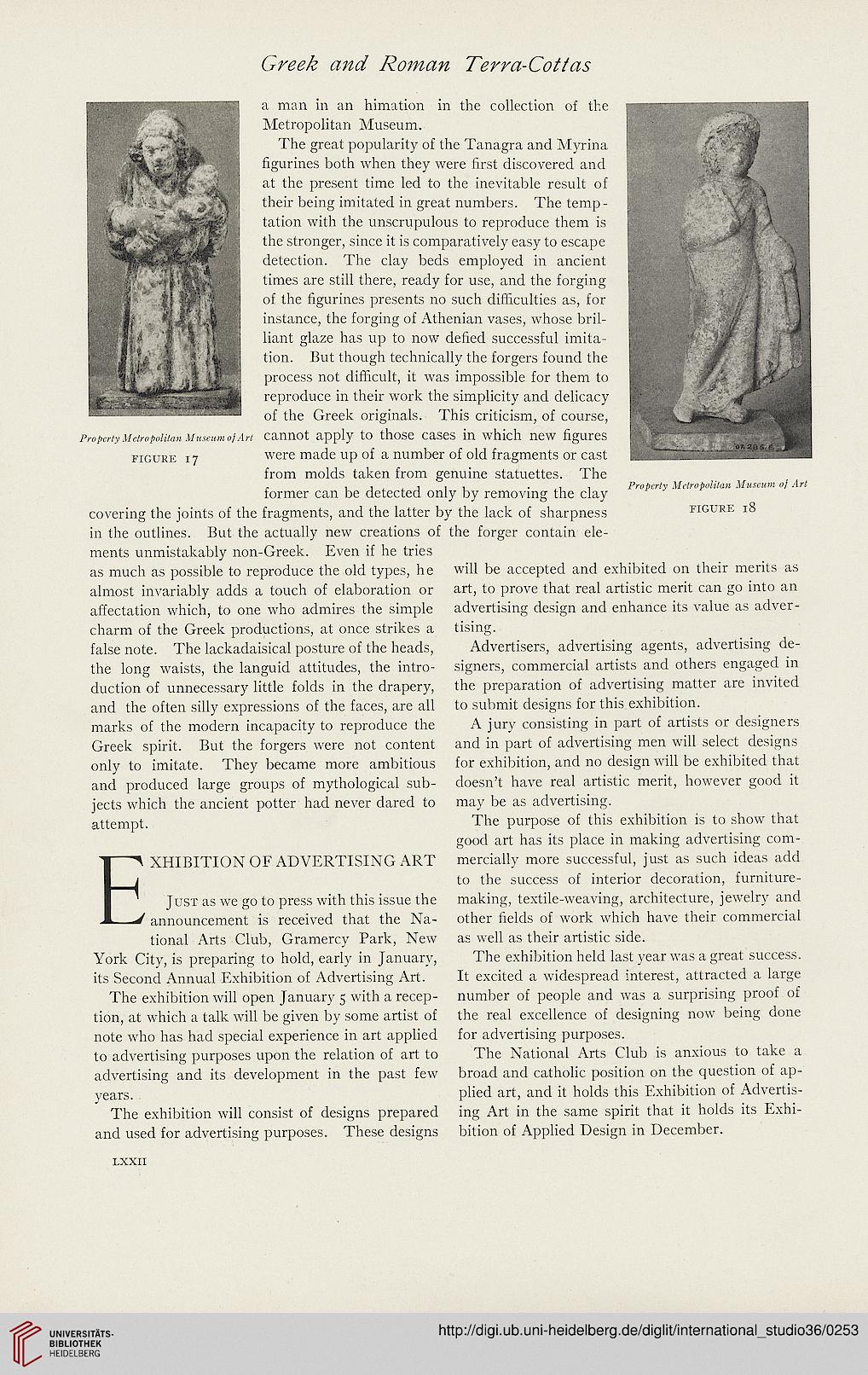 
a man in an himation in the collection of the
Metropoiitan Museum.
The great popuiarity of the Tanagra and Myrina
hgurines both when they were hrst discovered and
at the present time led to the inevitable result of
their being imitated in great numbers. The temp-
tation with the unscrupulous to reproduce them is
the stronger, since it is comparativeiy easy to escape
detection. The clay beds empioyed in ancient
times are stili there, ready for use, and the forging
of the Agurines presents no such diEculties as, for
instance, the forgtng of Athenian vases, whose brii-
liant glaze has up to now dehed successful imita-
tion. But though technicaHy the forgers found the
process not difhcult, it was impossibie for them to
reproduce in their work the simplicity and delicacy
of the Greek originals. This criticism, of course,
cannot appiy to those cases in which new hgures
were made up of a number of oid fragments or cast
from molds taken from genuine statuettes. The
former can be detected oniy by removing the clay
covering the joints of the fragments, and the iatter by the lack of sharpness
in the outiines. But the actualiy new creations of the forger contain eie-
ments unmistakabiy non-Greek. Even if he tries
as much as possible to reproduce the oid types, he
almost invariably adds a touch of eiaboration or
aifectation which, to one who admires the simple
charm of the Greek productions, at once strikes a
faise note. The lackadaisicai posture of the heads,
the long waists, the ianguid attitudes, the intro-
duction of unnecessary iittie folds in the drapery,
and the often silly expressions of the faces, are all
marks of the modern incapacity to reproduce the
Greek spirit. But the forgers were not content
oniy to imitate. They became more ambitious
and produced iarge groups of mythological sub-
jects which the ancient potter had never dared to
attempt.

' XHIBITION OF ADVERTISING ART
^ JcsT as we go to press with this issue the
^ announcement is received that the Na-
tionai Arts Club, Gramercy Park, New
York City, is preparing to hoid, eariy in Januarv,
its Second Annual Exhibition of Advertising Art.
The exhibition wili open January g with a recep-
tion, at which a talk wiil be given by some artist of
note who has had speciai experience in art appiied
to advertising purposes upon the reiation of art to
advertising and its deveiopment in the past few
years.
The exhibition wili consist of designs prepared
and used for advertising purposes. These designs

wili be accepted and exhibited on their merits as
art, to prove that reai artistic merit can go into an
advertising design and enhance its value as adver-
tising.
Advertisers, advertising agents, advertising de-
signers, commerciai artists and others engaged in
the preparation of advertising matter are invited
to submit designs for this exhibition.
A jury consisting in part of artists or designers
and in part of advertising men wiii seiect designs
for exhibition, and no design wiii be exhibited that
doesn't have real artistic merit, however good it
may be as advertising.
The purpose of this exhibition is to show that
good art has its piace in making advertising com-
merciaiiy more successfui, just as such ideas add
to the success of interior decoration, furniture-
making, textile-weaving, architecture, jeweiry and
other Aeids of work which have their commerciai
as weii as their artistic side.
The exhibition heid iast year was a great success.
It excited a widespread interest, attracted a large
number of peopie and was a surprising proof of
the reai excelience of designing now being done
for advertising purposes.
The National Arts Ciub is anxious to take a
broad and catholic position on the question of ap-
piied art, and it hoids this Exhibition of Advertis-
ing Art in the same spirit that it hoids its Exhi-
bition of Appiied Design in December.