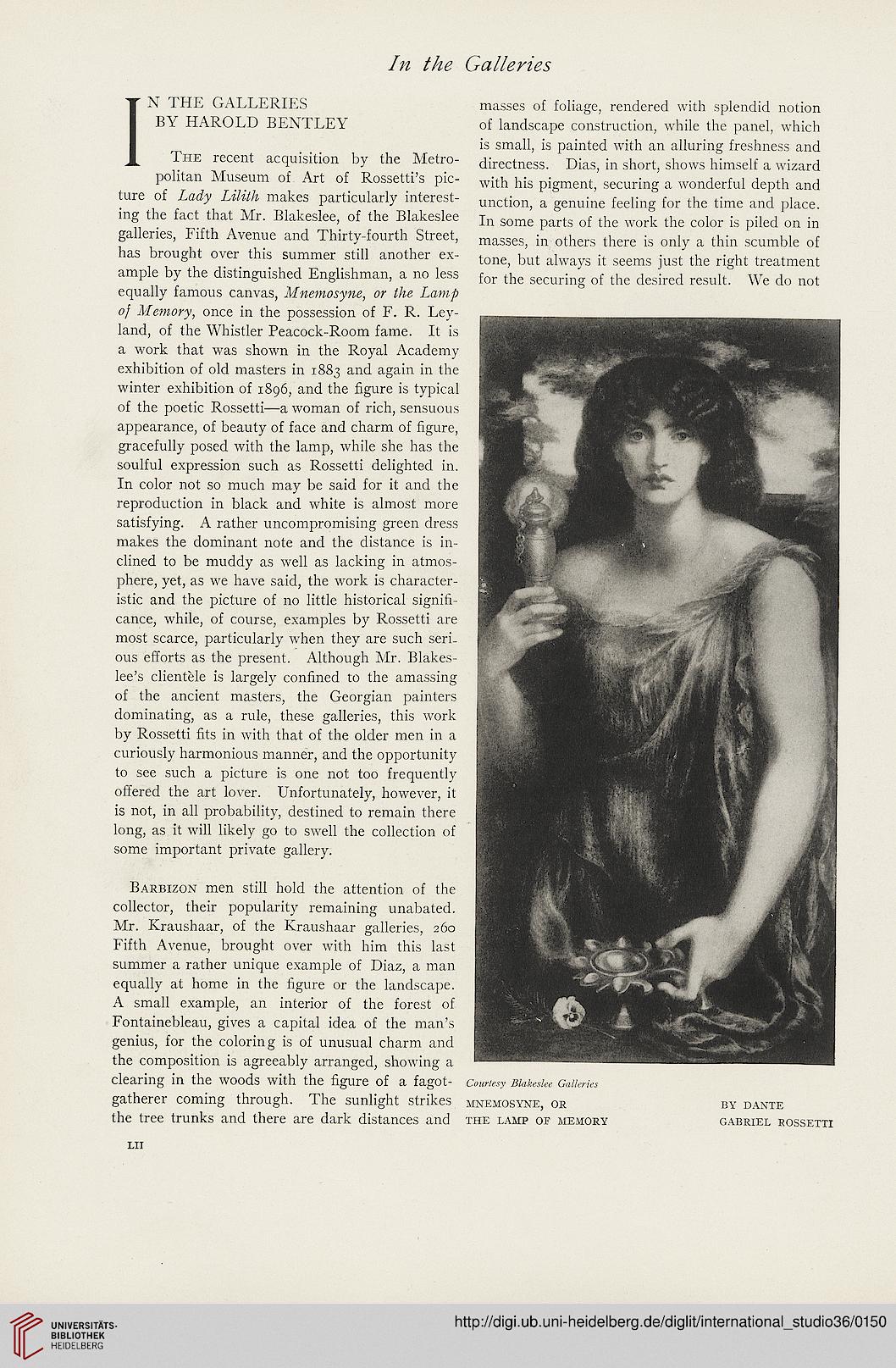 T N THE GALLERIES
BY HAROLD BENTLEY
THE recent acquisition by the Metro-
politan Museum of Art of Rossetti's pic-
ture of Za<fy Lfff/A makes particuiarly interest-
ing the fact that Mr. Blakeslee, of the Blakeslee
galleries, Fifth Avenue and Thirty-fourth Street,
has brought over this summer still another ex-
ample by the distinguished Englishman, a no less
equally famous canvas, Tfwewojywe, or CAe
o/ Tfewary, once in the possession of F. R. Ley-
land, of the Whistler Peacock-Room fame. It is
a work that was shown in the Royal Academy
exhibition of old masters in 1883 and again in the
winter exhibition of 1896, and the hgure is typical
of the poetic Rossetti—a woman of rich, sensuous
appearance, of beauty of face and charm of hgure,
gracefully posed with the lamp, while she has the
soulful expression such as Rossetti delighted in.
In color not so much may be said for it and the
reproduction in black and white is almost more
satisfying. A rather uncompromising green dress
makes the dominant note and the distance is in-
clined to be muddy as well as lacking in atmos-
phere, yet, as we have said, the work is character-
istic and the picture of no little historical signih-
cance, while, of course, examples by Rossetti are
most scarce, particularly when they are such seri-
ous efforts as the present. Although Mr. Blakes-
lee's clientele is largely conhned to the amassing
of the ancient masters, the Georgian painters
dominating, as a rule, these galleries, this work
by Rossetti fits in with that of the older men in a
curiously harmonious manner, and the opportunity
to see such a picture is one not too frequently
offered the art lover. Unfortunately, however, it
is not, in all probability, destined to remain there
long, as it will likely go to swell the collection of
some important private gallery.
BARBizoN men still hold the attention of the
collector, their popularity remaining unabated.
Mr. Kraushaar, of the Kraushaar galleries, 260
Fifth Avenue, brought over with him this last
summer a rather unique example of Diaz, a man
equally at home in the figure or the landscape.
A small example, an interior of the forest of
Fontainebleau, gives a capital idea of the man's
genius, for the coloring is of unusual charm and
the composition is agreeably arranged, showing a
clearing in the woods with the figure of a fagot-
gatherer coming through. The sunlight strikes
the tree trunks and there are dark distances and

masses of foliage, rendered with splendid notion
of landscape construction, while the panel, which
is small, is painted with an alluring freshness and
directness. Dias, in short, shows himself a wizard
with his pigment, securing a wonderful depth and
unction, a genuine feeling for the time and place.
In some parts of the work the color is piled on in
masses, in others there is only a thin scumble of
tone, but always it seems just the right treatment
for the securing of the desired result. We do not


MNEMOSYNE, OR BY DANTE
THE LAMP OF MEMORY GABRIEL ROSSETTI