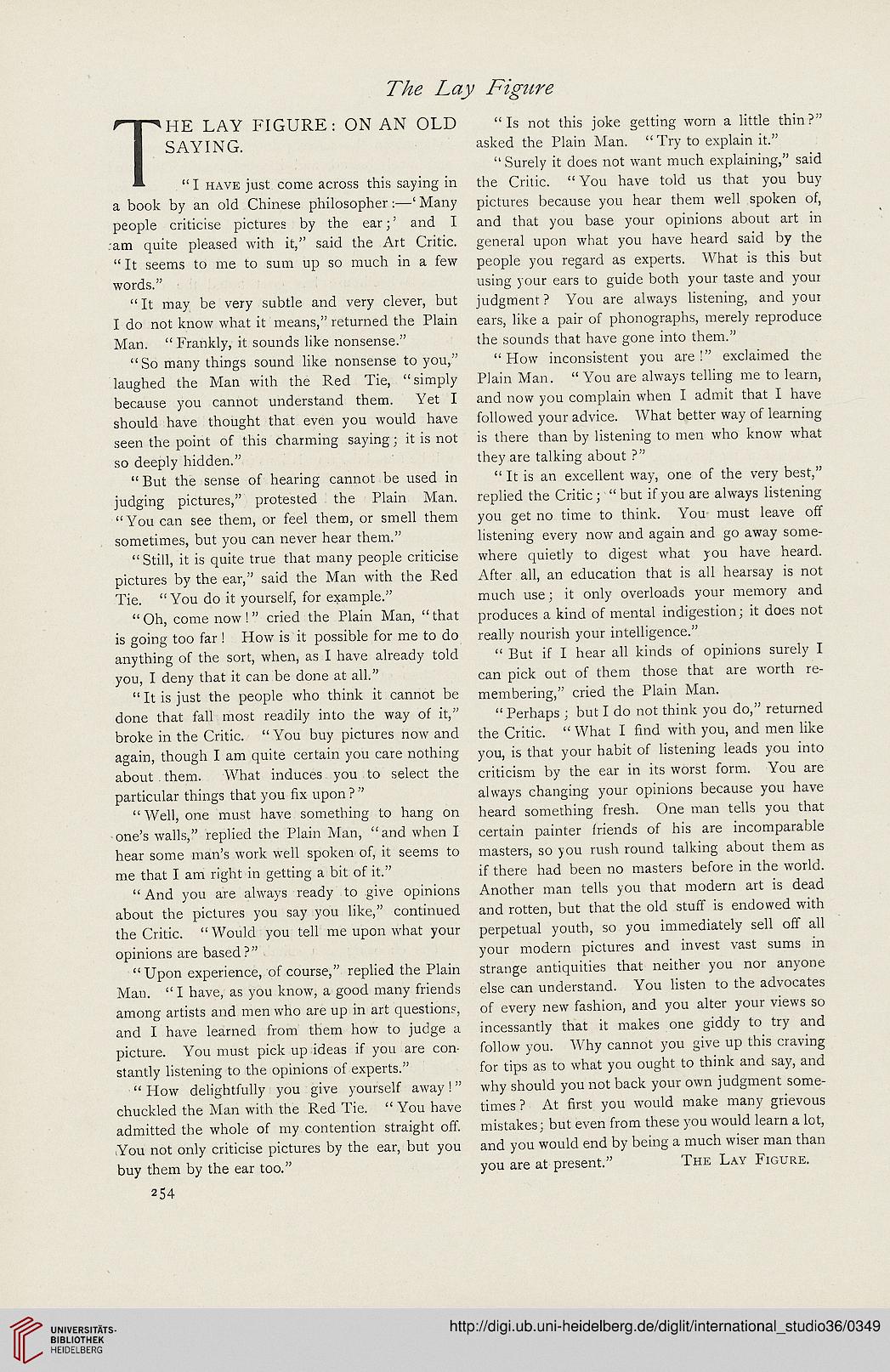 " I HAVE just come across this saying in
a book by an oid Chinese phiiosopher' Many
people criticise pictures by the ear;' and I
am quite pleased with it," said the Art Critic.
" It seems to me to sum up so much in a few
words."
" It may be very subtle and very clever, but
I do not know what it means," returned the Plain
Man. " Frankly, it sounds like nonsense."
"So many things sound like nonsense to you,"
laughed the Man with the Red Tie, "simply
because you cannot understand them. Yet I
should have thought that even you would have
seen the point of this charming saying; it is not
so deeply hidden."
"But the sense of hearing cannot be used in
judging pictures," protested the Plain Man.
"You can see them, or feel them, or smell them
sometimes, but you can never hear them."
" StiH, it is quite true that many people criticise
pictures by the ear," said the Man with the Red
Tie. "You do it yourself, for example."
" Oh, come now ! " cried the Plain Man, " that
is going too far ! How is it possible for me to do
anything of the sort, when, as I have already told
you, I deny that it can be done at all."
" It is just the people who think it cannot be
done that fall most readily into the way of it,"
broke in the Critic. " You buy pictures now and
again, though I am quite certain you care nothing
about them. What induces you to select the
particular things that you hx upon ? "
" Well, one must have something to hang on
one's wails," replied the Plain Man, "and when I
hear some man's work well spoken of, it seems to
me that I am right in getting a bit of it."
"And you are always ready to give opinions
about the pictures you say you like," continued
theCritic. "Would you tell meuponwhat your
opinions are based?"
"Upon experience, of course," replied the Plain
Man. " I have, as you know, a good many friends
among artists and men who are up in art questions,
and I have learned from them how to judge a
picture. You must pick up ideas if you are con-
stantly listening to the opinions of experts."
" How delightfully you give yourself away!"
chuckled the Man with the Red Tie. " You have
admitted the whole of my contention straight off.
You not only criticise pictures by the ear, but you
buy them by the ear too."
254

"Is not this joke getting worn a little thin?"
asked the Plain Man. " Try to explain it."
" Surely it does not want much explaining," said
the Critic. " You have told us that you buy
pictures because you hear them well spoken of,
and that you base your opinions about art in
general upon what you have heard said by the
people you regard as experts. What is this but
using your ears to guide both your taste and your
judgment ? You are always listening, and your
ears, like a pair of phonographs, merely reproduce
the sounds that have gone into them."
"How inconsistent you are!" exclaimed the
Plain Man. " You are abvays telling me to learn,
and now you complain when I admit that I have
followed your advice. What better way of learning
is there than by listening to men who know what
they are talking about ?"
" It is an excellent way, one of the very best,"
replied the Critic ; " but if you are always listening
you get no time to think. You must leave off
listening every now and again and go away some-
where quietly to digest what you have heard.
After all, an education that is all hearsay is not
much use; it only overloads your memory and
produces a kind of mental indigestion; it does not
really nourish your intelligence."
" But if I hear all kinds of opinions surely I
can pick out of them those that are worth re-
membering," cried the Plain Man.
" Perhaps ; but I do not think you do," returned
the Critic. " What I hnd with you, and men like
you, is that your habit of listening leads you into
criticism by the ear in its worst form. You are
always changing your opinions because you have
heard something fresh. One man tells you that
certain painter Iriends of his are incomparable
masters, so you rush round talking about them as
if there had been no masters before in the world.
Another man tells you that modern art is dead
and rotten, but that the old stuff is endowed with
perpetual youth, so you immediately sell off all
your modern pictures and invest vast sums in
strange antiquities that neither you nor anyone
else can understand. You listen to the advocates
of every new fashion, and you alter your views so
incessantly that it makes one giddy to try and
follow you. Why cannot you give up this craving
for tips as to what you ought to think and say, and
why should you not back your own judgment some-
times ? At hrst you would make many grievous
mistakes; but even from these you would learn a lot,
and you would end by being a much wiser man than
you are at present." THE LAY FiGURE.